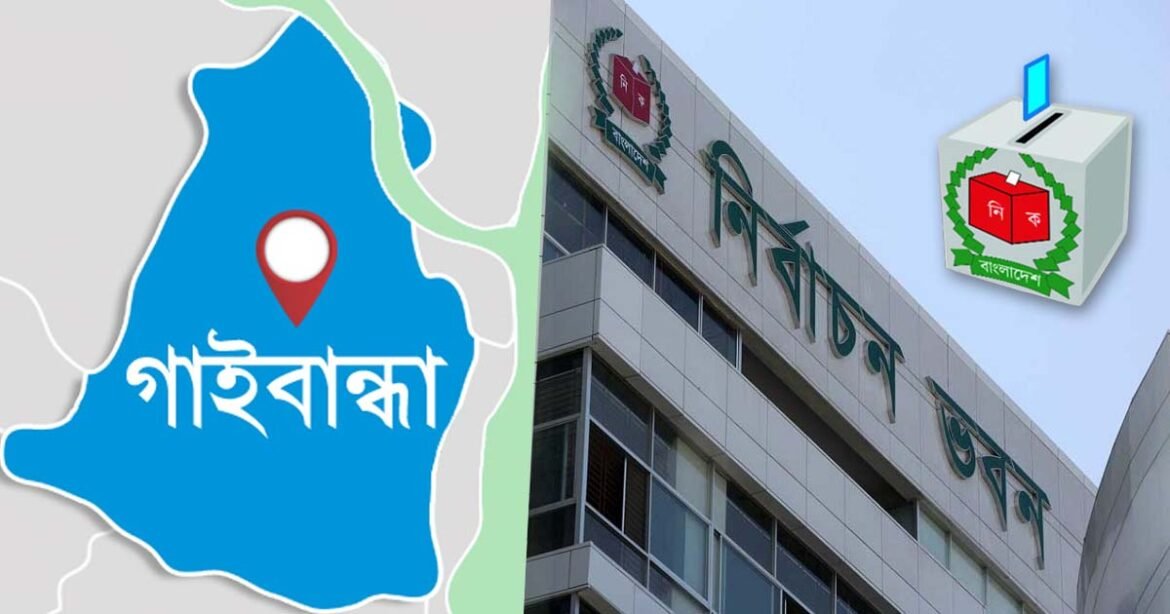 Gaibandha-5 is one of 300 constituencies in Bangladesh’s National Parliament. The district is the 33rd seat of the Jatiya Sangsad, the Bangla name of the parliament. The constituency consists of 10 unions of Saghata upazila and seven of Fulchhari upazila. There are 3,39,743 voters in this constituency and the total population is 25,62,232. The numbers of voters in the Saghata and Fulchhari upazila are 2,25,070 and 1,14,676 respectively. The Gaibandha-5 (Fulchhari-Saghata) constituency has strong Awami League (AL), BNP and Jatiya Party (JP) bases. Out of 11 parliamentary elections, Jatiya Party won five times in this constituency since independence of Bangladesh. Awami League and BNP won four times and twice respectively during this time.

Recently, the Election Commission (EC) declared the seat vacant due to the death of Advocate Fazle Rabbi Mia, Member of Parliament and Deputy Speaker of Jatiya Sangsad. Fazle Rabbi Miah took himself to a height in Gaibandha politics. In Gaibandha-5 (Fulchhari-Saghata) constituency, he won seven out of 11 elections. This indicates that the voters had entrusted their votes to him. Fazle Rabbi Mia was elected Member of Parliament from Gaibandha-5 constituency with the nomination of Jatiya Party in 1986 third, 1988 fourth, 1991 fifth, 1996 seventh national parliamentary elections.

YOU CAN ALSO READ: POLLS ROADMAP: ELECTION COMMISSION UNDER SPOTLIGHT

There have been a number of developmental works in the last few years in Gaibandha-5 constituency. For instance, Bangladesh Water development Board is implementing a plan in the region at the cost of Tk 295.50 crore under the riverbank protection development project. Bangladesh Navy’s Dockyard and Engineering Works Limited constructed development works at four points in the Upazila. Moreover, employment generation programmes have been implemented in Fulchari and Shaghata Upazila. The main objective is to help the poor, especially the day and agricultural labourers of the district to overcome their conditions of poverty and unemployment. From 2009-2013, the local government party implemented a rural infrastructure development project for Shaghata Upazila, and under this scheme, they executed 47 projects at a total cost of 18.4 million taka. Through this, 38,962 meters of roads were constructed and reconstructed.

Despite these developments, recent issues have tarnished the image of current governments. For example, Shahidul Islam Shaju, UP chairman, was alleged because of illegal extraction of sand from the river that created discontent in the public mind. Moreover, in September 2021, 45 villages of seven unions of Fulchhari were affected by the flood, but the local ruling party did not take appropriate actions to solve that.

If candidates want to win the public votes, then they must work for the development of the local people. People of Gaibandha want increased connection with the country’s capital and the construction of Balasi-Bahadurabad tunnel was long hoped. A permanent embankment is in demand to protect SaghataFulchhari from the erosion of the Brahmaputra River. There are problems in the char areas and attention needs to be given for the development of people for the area. To keep the trend of the development of the region, leaders should put more effort to meet the demand of the people of this constituency.

Additionally, they want various developmental works in the two upazilas, including the construction of a regional highway from Gaibandha town to Mokamtala via Sonatala, also, the modernization of the Bonarpara railway junction. Besides, leaders should prioritize protecting the upazila mainland from river erosion, preventing child marriage, infrastructural development of religious and educational institutions, increasing literacy rate, and improving health care. Moreover, local citizens want their agricultural system to be developed and are looking for an effective market system for the crops produced by incentivizing agriculture and farmers. Gaibandha-5 Constituency was once known as strong zone for Jatiya Party, however, since 2008 the seat came under Awami League’s incumbent late Advocate Fazle Rabbi Mia until recently. He was nominated for this constituency for the three consecutive periods of time.

In recent times, the politics of Awami League in Gaibandha-5 constituency is basically divided into two groups. There were separate committees in both upazilas of Gaibandha-5 constituency. One is supported by Fazle Rabbi Mia and the other is supported by Mahmud Hasan Ripon. Recently, these two committees were coordinated to unite the local Awami League.

“No one can stop Bangladesh’s advancement,” PM at...