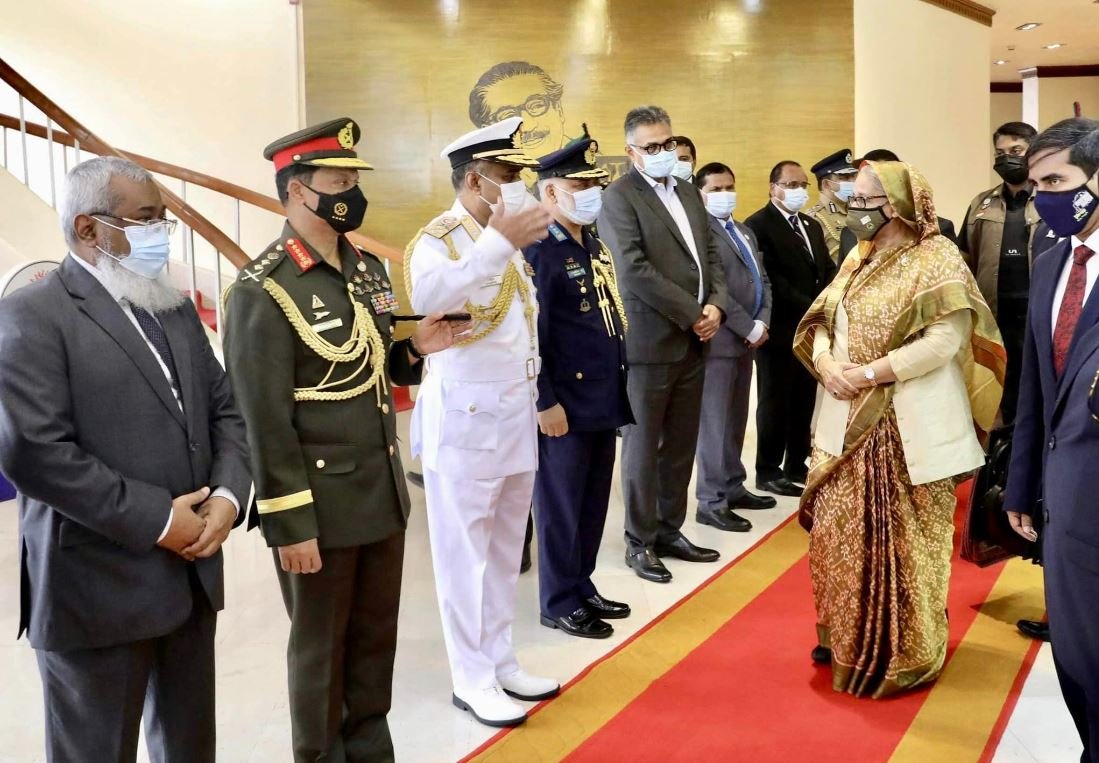 Prime Minister Sheikh Hasina has left Dhaka to attend the 77th session of the United Nations General Assembly (UNGA). She is scheduled to visit first the UK, stay there till September 19 and thereafter reach New York on September 20. While in London, she will attend the funeral of Queen Elizabeth II on September 19.

Prior to her departure on Thursday, Foreign Minister AK Abdul Momen detailed out the Prime Minister’s full visit in a press conference on Wednesday marking the tour. He informed that the PM would stay in the UK from September 15 to 19 before visiting New York and after New York, she would stay in Washington DC from September 25 to October 1.

ALSO, YOU CAN READ: ASHRAYAN PROJECT: A ‘SHEIKH HASINA MODEL’ FOR INCLUSIVE DEVELOPMENT

The Premier is accompanied this time by Foreign Minister AK Abdul Momen and State Minister for Foreign Affairs Md Shahriar Alam during her trips to London, New York, and Washington. Abdul Momen said the Bangladesh delegation led by the Prime Minister will reach New York on September 20.

On September 19, PM Sheikh Hasina will attend Queen Elizabeth II’s state funeral. She will attend the funeral along with dignitaries and world leaders who will pay tributes to the Queen, who passed away on September 8 at the age of 96.

Patricia Scotland, the secretary general of the Commonwealth, Lord Ahmad of Wimbledon, the minister for South Asia and North Africa in the UK, and Sir Keir Starmer, the leader of the opposition in the Labor Party, all will make separate courtesy calls on her during the stay.

A high-level meeting titled ‘Transforming Education Summit’ will be held in New York on September 19. Sheikh Hasina was supposed to preside over two sessions including the opening ceremony. But she will not be able to participate in this high-level meeting for attending the funeral ceremony. The Education Minister will represent the Prime Minister at the summit.

PM on September 20 will take a flight to New York to attend the UN General Assembly. She is scheduled to attend the opening session of UNGA and a high-level meeting of the Platform of Women Leaders of the United Nations General Assembly on the day. Abdul Momen said, “The PM can share her experience in dealing with the crisis and highlight the steps taken by the government under her leadership to ensure proper representation of women in the decision-making process.”

The meeting of the Global Crisis Response Group will be held on September 21 and Prime Minister Sheikh Hasina is one of the six champions in the group. In this meeting, the Prime Minister will express his well-thought-out views on the global challenges in the current context, as per Foreign Minister.

The side event is being jointly organized by Bangladesh and United Nations Housing Organization on 21 September. The Prime Minister will participate in the side event on Sustainable Housing and will highlight the success and experience of the ‘Asrayran project’ implemented by the Government of Bangladesh.

“A watershed moment: transformative solutions to interlocking issues” is the theme of the UN General Assembly’s seventy-seventh session. “In her speech, she (Hasina) is expected to highlight the government’s activities in Bangladesh’s incredible economic development, health, education, and development in the technology sector,” Momen said in a media briefing held at foreign ministry.

In addition, the PM’s speech will cover Bangladesh’s strong role in peacekeeping operations to maintain international peace and security, a “zero-tolerance policy on terrorism and violent extremism,” sustainable management of marine resources, safe migration, and ensuring access to basic services for migrants, climate change and its effects, the establishment of climate justice, and issues pertaining to Palestine, he added.

Bangladesh will host two separate side events on the Rohingya issue and sustainable housing. A high-level side event on Rohingya will be held on September 22. The Prime Minister will join the side event. The UK, USA, European Union, OIC Secretariat, Canada, Saudi Arabia, Turkey, Gambia, Maldives, Malaysia, Indonesia, and Malaysia will co-sponsor the side event on Rohingya. The UN High Commissioner for Refugees, the UN Secretary-General’s Special Envoy for Myanmar, and the Director-General of the International Organization for Migration will brief on the Rohingya issue.

PM Sheikh Hasina will urge the world community to step up and help with the Rohingya catastrophe in her speech. She would also encourage international leaders to engage in negotiations to settle disputes rather than putting sanctions on any nation at will. “We will inform the international community that the problem has not been resolved despite the passage of five years and that Myanmar has refused to return its citizens despite having pledged to do so,” said Momen. Throughout the event, there will also be a photography display on the Padma Bridge inside the UN building.

Additionally, the PM on September 24 will attend a civic reception hosted by Bangladeshis living abroad. After her visit to New York, she will stay in Washington DC from September 25 till October 1. After a brief detour in London on her trip from Washington, she is scheduled to arrive back in Bangladesh in the early hours on October 4.