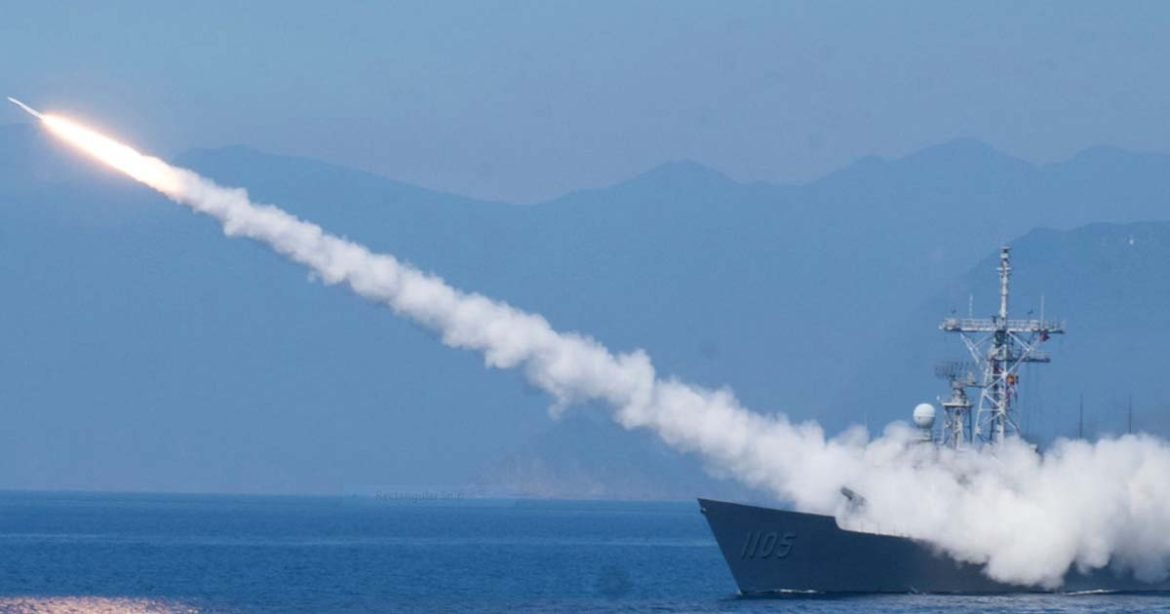 Despite strong objections from China, the United States House of Representatives Speaker Nancy Pelosi’s recent visit to Taiwan have heated up the South China Sea and Taiwan Strait, but its influence can be worldwide. China views Pelosi’s visit as a threat to its sovereignty and an incitement against the ‘one-China’ policy. In response, they have conducted large-scale military exercises in Taiwan’s airspace and waters. On the other hand, the White House called China’s military exercises around Taiwan provocative and senseless. While the world is trying to rebound from the shock of Covid pandemic, it has been set back by the Russia-Ukraine conflict. In this delicate situation, counter-measures by the two superpowers of the world regarding Taiwan are sending a threatening message to the world about possibility of another war. Then assessing such a risk needs to be at the forefront of every discussion. -NASHIR UDDIN and JONY SHARUAR delves deeper into the details

ALSO, YOU CAN READ: INTERNATIONAL INTERFERENCE IN BANGLADESH POLITICS: A GROWING THREAT ?

Being an Asian country, Bangladesh also has a strong position on this. In that context, BanBangladesh has made it clear that it will stick to the ‘one-China policy’. However, the country is seeking resolution of the tension through peaceful talks between the concerned parties.

BEGINNING OF THE CHINA-TAIWAN CONFLICT

Taiwan is basically an island in the South China Sea separated from mainland China. After World War II, control of China was handed over to the Chinese government led by Chiang Kai-shek. But Chiang Kai-shek’s government continued to lose the civil war to the Communist forces led by Mao Zedong. After winning the civil war against the Nationalists in 1949, the Communists led by Mao Zedong took control of mainland China. Both sides in the civil war believed in the unity of the whole of China, including the island of Taiwan and the mainland, but their main conflict was over the way the government should run. Communists led by Mao Zedong wanted to run the country in a communist way, while Nationalists led by Chiang Kai-shek wanted to run the country in more western way. After the defeat in the war, Chiang Kai-shek and his men fled and took refuge on the island of Taiwan. As a result, the Communists gained control over mainland China and the Nationalists over the island of Taiwan. Acommunist government was then established in mainland China and a Western-style government was established in Taiwan. This differential position is still maintained in both continents, and the word China is attached to the name of both territories. The name of the original communist-ruled China is ‘People’s Republic of China’, while Taiwan’s name is ‘Republic of China’. Beijing has claimed Taiwan as an integral part of China since its inception. In their eyes, Taiwan is a rebel province. On the other hand, the government based in Taipei has also been claiming its rights over all of mainland China. According to their constitution they are the legitimate rulers of all China.

The United States has been adopting the one-China policy on the Taiwan issue. US views the territory on both sides of the Taiwan Strait as an integral part of China. In other words, mainland China and Taiwan are one China and Taiwan Island is a part of China in the eyes of the United States. But at the same time, Washington wants a peaceful solution to the Taiwan issue. US also recognizes the Chinese government in Beijing as the legitimate government of one China, while maintaining close but informal relations with Taiwan.

WHY IS TAIWAN IMPORTANT TO THE UNITED STATES?

Maintaining military and geopolitical connection with Taiwan is critical for Washington. Taiwan is a strategic asset of the United States in maintaining the strategic military and commercial security of its allies in Southeast Asia, especially in the Pacific region, and stabilise overall influence in the region. In Beijing’s view, Taiwan is at the centre of a far-reaching US military plan to counter China’s advancement. Because, the Bashi Channel in the Luzon Strait near Taiwan is very important for navigation. The First Island Channel is a shortcut and safe international waterway for any Chinese fleet to reach the Pacific Ocean unimpeded from the mainland. If this channel is under control, the Chinese fleet can easily challenge the western Pacific Ocean and the US territory of Guam, Hawaii, or the US mainland directly. Since World War II, US military experts have recognized the region’s military importance, and since then a pro-US or at least a neutral Taiwan has been a priority in US military and foreign policy for its strategic security in the Pacific. The majority of the computer chips that run the electronic devices used around the world from phones to laptops, watches to computer consoles – are made in Taiwan. Therefore, Taiwan is also important to the US economically.

IS THERE ANY POSSIBILITY OF CHINESE MILITARY ACTION AGAINST TAIWAN?

Since the establishment of Taiwan, China has been threatening to take over the island, geographically and ideologically isolated from the mainland. However, Beijing has not taken any such action against Taiwan due to the strong position of the US regarding Taiwan’s security and other international geopolitical realities. However, with the emergence of Xi Jinping in China’s power, that position has changed a lot. China under President Xi Jinping is militarily, economically, and technologically stronger and more aggressive than at any time in the past. Meanwhile, the regular visit of US diplomats to Taiwan is making the situation more heated. In this state, there is more uncertainty than ever about what Xi Jinping’s actions will be regarding Taiwan. After Nancy Pelosi’s much-publicised visit in early August, Sino-US tensions flared. Before the incident subsided, another group of US politicians went to Taiwan on August 14 for another such controversial high-level visit. In response, China’s People’s Liberation Army’s Eastern Command said it had launched joint military exercises in the seas and airspace around Taiwan to test its readiness for combat. Again, China’s Ministry of Defence said in a separate statement, “The visit of US politicians to Taiwan undermines China’s sovereignty and geographical integrity and exposes the face of the United States as a destroyer of peace and stability in the region. The People’s Liberation Army of China is determined to protect the country’s sovereignty and stability. They will crush any separatism and foreign interference in the name of ‘Taiwan independence’.” China is now virtually encircling Taiwan and conducting military drills, shelling, and missile launches there. But Washington still believes President Xi is taking steps to avoid a war. Because neither side actually wants war. But still it has to be said that the Sino-US bitter relationship has now taken a dramatic turn. “The kind of political space, relationship and the kind of system that needs to be in place between China and US to prevent something like this from turning into a full-blown crisis is not present,” says former diplomat and analyst Danny Russell.

If one thinks Ukraine-Russia crisis is scary, then it is to be mentioned that US President Joe Biden made clear on day one that US army will not fight Russian army. But, that is not the case with Taiwan. In case of Taiwan, if Chinese forces invade Taiwan, then US armies in Japanese air-force bases have to engage. China’s military is getting stronger and their ability to keep US

forces at bay looks impressive. In this sense, China could think that being well ahead why take risk of a war. But, with every passing year people in Taiwan, particularly young people are becoming less interested in being ruled by a communist government. On the other side, democrats and republicans in Washington do not agree on much, but they have agreed that Taiwan is a pro-western democracy that needs to be protected from communists. However, it would be a mistake to believe that despite the strength of the United States and its allies, China will retreat from becoming an undivided superpower. Military solutions will also not make China regress to its weakened state. Therefore, maybe not a full-fledged war but a cold war is imminent or perhaps has already started.

WHAT IS THE POSITION OF BANGLADESH?

China-Bangladesh relations are now at their highest peak. Currently, around 20 development projects are ongoing in Bangladesh funded by China. Bangladesh has clearly stated its commitment to the One China policy. Shahriar Alam, State Minister for Foreign Affairs said, “There will be no change in Bangladesh’s position on the One China policy. However, Bangladesh is seeking resolution of tensions through negotiations between the parties concerned.” Chinese Ambassador to Dhaka Li Zhiming expressed gratitude for Bangladesh’s strong position and expressed hope that the government and people of the country will continue to adhere to the ‘One China Ideology’. Chinese Foreign Minister Wang Yi recently visited Bangladesh in this tense situation. In Wang Yi’s meeting with Prime Minister Sheikh Hasina on August 7, Bangladesh promised to stick to the ‘One China’ policy. He thanked Bangladesh for its stance. According to experts, the Prime Minister’s speech is commendable and timely considering the country’s foreign policy and national interest.

PRESSURE FROM THE UNITED STATES?

Many people also have the question whether there will be any pressure on Bangladesh from the side of the United States or the West due to the tense situation that has arisen in the globe. In this regard, Lailufar Yasmin, professor of international relations department of Dhaka University said that Bangladesh is not under any pressure even though there is tension in the world over Taiwan.” Arguing in favour of this statement, she said, “US has said that it still believes in the one-China policy. America’s own policy has not changed.” On the other hand, Bangladesh’s trade with Taiwan is still not comparable to the same with China. Available data shows goods worth over one and a half thousand crores of taka are imported from China to Bangladesh annually. In addition, China supports Bangladesh’s development activities in various ways including giving loans. Analysts are of the view that Bangladesh should take these into consideration. To end, China is one of the biggest partners in the development of Bangladesh. Therefore, policymakers and analysts feel that Bangladesh’s support for the One-China policy appears to reflect a fundamental aspect of its foreign policy. As a signatory to the non-allied movement, Bangladesh does not believe in war or conflict with any countries. In this case, it can be seen that the inhabitants of the Taiwan islands, which were historically part of China, can be deemed without exaggeration as Chinese citizens. Also, Bangladesh should not take into consideration the fact of any third party’s dissatisfaction regarding the country position on such a tricky geopolitical issue. As a sovereign country, Bangladesh has never had direct diplomatic relations with Taiwan.