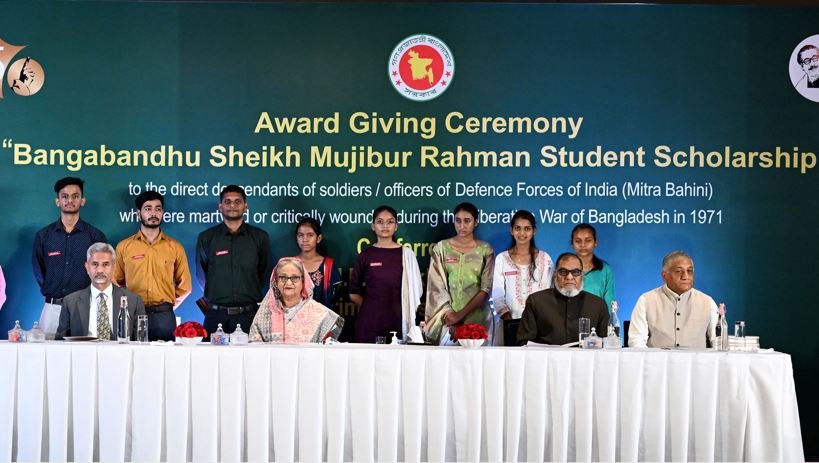 Prime Minister Sheikh Hasina on her four-day visit to India recognized India’s national sacrifice in Bangladesh’s independence struggle in a heartwarming speech. HPM gave the speech at the ‘Mujib Scholarship’ award ceremony to direct descendants of Indian Defense Force soldiers and officers who were martyred or seriously injured in the 1971 Liberation War in Delhi on Wednesday September 7, 2022.

“After building a strong partnership over the past 50 years, both countries are increasingly working on broader sectoral cooperation. We witnessed an unparalleled gesture of friendship from the government and people of India as we were provided with empathy, shelter and resources in our independence struggle.” expressed Prime Minister Sheikh Hasina yesterday in the “Mujib Scholarship” award ceremony. The relationship between Bangladesh and India is beyond strategic partnership and has grown stronger over the past decade. The India-Bangladesh relationship is known to be the ‘role model for the neighborhood diplomacy’ worldwide, PM added.

India has been an ally of Bangladesh and played a crucial role by assisting in the liberation war of Bangladesh in 1971. On March 27, 1971, Indira Gandhi, the Indian prime minister, confirmed her country’s wholehearted support for the independence movement in Bangladesh. India opened its border so Bangladeshi refugees can enter India at ease. Camps for refugees were set up by Tripura, West Bengal, Bihar, Assam, and Meghalaya governments. The exiled Bangladeshi government and army officials, and Indian volunteers began utilizing these camps for Mukti Bahini guerilla recruiting and training right after.

Around 10 million refugees fled to India, causing financial hardship and instability in the country. As the number of refugees grew to a tide, the economic costs for India started to rise. India began supplying the Mukti Bahini with aid, including guns and training. The Indian govt. took action to encourage the Bengali movement for independence in response to the military victories of the Pakistan Army, in addition to its concern over the refugee issue. Innumerable Bengalis reportedly received instruction in guerilla and sabotage techniques at camps set up by the BSF. The Bengali activists received weapons and ammunition, and many Indian personnel helped and trained the protestors during the whole time of the war.

At the beginning of our liberation war, the Indian Army could give only indirect fire support (artillery support) to Mukti Bahini units. They gradually began to take an active part in the war in September. After November, the Indian Army was permitted to operate up to 10 kilometers within Bangladesh. The Indian army forces fought the majority of the battle in December. The Mukti Bahini battalions were in charge of giving the Indian formations second-tier assistance.

Moreover, On December 3, 1971, Pakistan launched attacks against eight Indian airfields for supporting Bangladesh. By midnight, India began sending airstrikes on Pakistan in retaliation. On the Eastern front, the Indian Army teamed up with the Mukti Bahini to form the Mitro Bahini. The next day, the Indian forces attacked the West Pakistani Army in a coordinated attack from the air, sea, and land along with Mukti Bahini. After 13 days of fighting, nearly 92,000 West Pakistani troops, sailors, airmen, paramilitaries, police officers and civilians surrendered in Bangladesh with the presence of India on December 16. In the fight, at least 12,189 Indian military personnel were martyred or went missing. And countless received injuries with permanent handicapping.

The Mujib Scholarships, 100 students each from classes 10 and 12, are awarded to the offspring of Indian war veterans as a mark of respect for the heroes who risked their lives for the independence of Bangladesh. Conferment of Bangabandhu “Sheikh Mujibur Rahman Student scholarships to students is a homage to Indian heroes who made the supreme sacrifice for our cause,” said Bangladesh PM Sheikh Hasina.

A tribute to the Indian war veterans of 1971

Upon expressing gratitude toward the martyrs, Prime Minister Sheikh Hasina said, “The people of Bangladesh should never forget the role played by India’s people and armed forces in the Liberation War of 1971 as the sacrifices of Indian military personnel were no less than those of Bangladeshi freedom fighters”.

A speech of friendship by HPM Sheikh Hasina

In the award ceremony, Sheikh Hasina remembered the heroes of the liberation war with gratitude. Sheikh Hasina recalled the war and expressed, “Bangladesh under the leadership of Father of the Nation Bangabandhu Sheikh Mujibur Rahman struggled for economic, cultural and democratic emancipation for 24 years. Responding to the call of our great leader Bangabandhu Sheikh Mujib, they fought for the country’s liberation” HPM said.

“For the people of my country, I will only say that our people struggled with whatever resources were available for the liberation war to make the country independent. And close to us, the people and armed forces of India fought in the war and gave their blood along with our people,” said Hasina while speaking in Bangla. “We should never forget that their people, government, and armed forces stood by us,” she further added.

“We pay our respects to Indian soldiers who lost their lives during the Bangladesh liberation war in 1971. It’s an honor for us to remember Indian brothers & war veterans who sacrifice their lives for our independence & sovereignty,” Bangladesh PM Sheikh Hasina. The scholarships are being given so that the Bangladeshi people “never forget the huge sacrifices made by the fathers and families of the awardees for our independence,” said Hasina by sharing her thoughts on scholarship.

Prime Minister Sheikh Hasina recalled the visit of Indian Prime Minister Narendra Modi to Bangladesh on the historic occasion of the birth centenary of Father of the Nation Bangabandhu Sheikh Mujibur Rahman and the golden jubilee of Bangladesh’s independence.

More honors were given to Indian leaders, such as former Indian Prime Minister Atal Bihari Vajpayee and ex-president Pranab Mukherjee.

The 4-day India visit of HPM Sheikh Hasina is not only increasing bilateral ties among the countries but also, both nations are experiencing a strengthened friendship that has been since the time of the Father of the nation Sheikh Mujibur Rahman. Her heartwarming speech on the occasion of ‘Mujib Scholarship’ ceremony will be remembered as an iconic one for bilateral ties of the two countries.

FBI’S TRUMP HOUSE RAID IS IT ABOUT STATE SECURITY OR POLITICAL HARASSMENT?