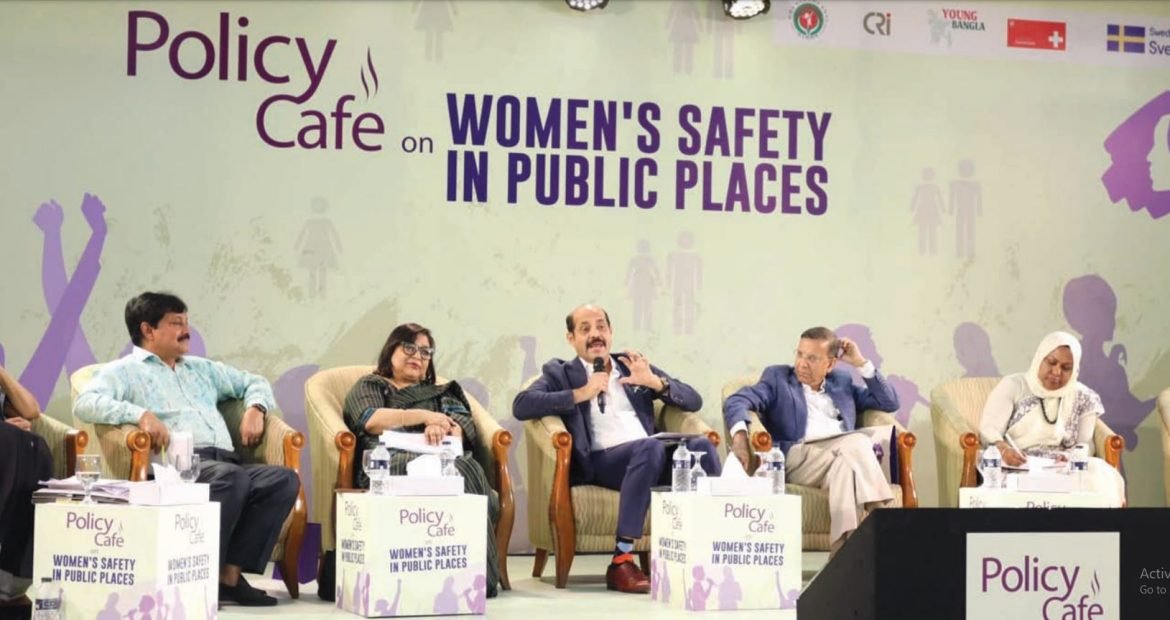 A campaign on women’s safety in public places was conducted by Young Bangla, the youth platform of the Centre for Research and Information (CRI), the Human Rights Program of the UNDP, and the National Human Rights Commission. The purpose of the campaign was to develop a positive attitude toward the protection of women in public places among stakeholders, youngsters, and communities. The campaign started in October 2020, with a timeline of 10 months. However, due to the COVID-19 situation, it was run for almost 2 years. With three level engagements, the campaign was planned for situation analysis (field data), online campaign (youth’s opinion), and Policy Cafe (discussion on the findings). Chairman of CRI Sajeeb Wazed, Saima Wazed, a CRI Trustee and Vice-Chairperson, and Radwan Mujib Siddiq, a CRI Trustee, all expressed support for the initiative.

YOU CAN ALSO READ OUR ANOTHER ARTICLE ABOUT: INTERNATIONAL INTERFERENCE IN BANGLADESH POLITICS: A GROWING THREAT ?

The Women, Peace, and Security Index 2021 ranks Bangladesh at position 152 out of 170 (with an index value of 0.594). When entering public places, women around the world are subjected to sexual abuse and harassment. Approximately 90% of women and girls between the ages of 10 to 18 in Bangladesh have experienced sexual violence and inappropriate physical contact on the streets, in markets, and on public transportation. Therefore, the protection of women in public places is a problem not just in Bangladesh, but throughout the entire world. As Bangladesh advances the World Economic Forum’s Gender Equality Index, strong measures are being implemented to ensure women’s safety.

“Women’s safety in public places” is the mass awareness campaign that was launched virtually by Saima Wazed. 10 promising Youth-led organizations led the community-based campaign in 6 districts and 4 divisions. The participatory situation analysis was conducted with 1000 participants. Stakeholder meetings with youth organizations, local administration, and media reached around 11500 people. The individuals are from a variety of life such as, like-minded youth organizations, local journalists, shop owners, and labour associations, civil society, and public transport workers participated in these meetings. The online campaign had a survey on youth’s opinions and was run on WSPP website. The social media engagement reached more than 12 million people. Finally, the Policy café was conducted to address the policies on women’s safety issues and to suggest and advocate policy recommendations.

For the past eight years, “Policy Café,” an initiative of CRI, has served as the voice of youth in the nation’s policymaking process. This is the most popular venue for young people to voice their requests and opinions regarding the nation’s policymaking. This serves as a link between decision-makers and youth, providing talks on all topics pertaining to national development and potential. Rokeya Kabir, executive director and founder of the Bangladesh Nari Progati Sangha (BNPS), Amena Begum, executive director of the Dhaka Transport Coordination Authority (DTCA), Neelima Akhter, Honorary Member of the National Human Rights Commission Jesmin Ara Begum, and Bangladesh Shop Owners Association President Md Helal Uddin participated in the panel discussion.

According to Rokeya Kabir, for the last 50 years, the BNPS are working to ensure women’s safety and some laws have been introduced to safeguard the women in our society. But, there is a gap in implementing these laws and rules. Women in our society are being oppressed and apparently, women are asked to sit back at home to safeguard themselves. This perspective needs to change and laws on women’s protection should be implemented.

One of the audience members spoke about being bullied. From her cabin on a Dhaka-bound passenger launch destined for Barishal, she went to the restroom. She was followed by a man as soon as she entered the ship. She noticed the man waiting in front of the cabin door as she exited the restroom. She understood his cunning plan to push her inside the cabin with him as soon as she opened the door. She shouted for help. However, the witnesses who came forward after hearing the scream said nothing to the man. They asked her to refrain from seeking legal assistance in this situation. Instead, they found her guilty, stating that it was foolish of her to leave the cabin in the middle of the night. Additionally, they questioned why she was traveling at night and criticized her clothing for being harassing.

Another audience member pointed out the age group of the harasser. She stated that there is a huge difference in reaction from the public in harassment cases. If the offender is an aged man, the surrounding is more likely to be in favor of the offender for being aged. Another incident indicated that rape victims do not get enough support from the police and are asked to solve these matters by the local community. Moreover, the legal authorities from rural areas require training on the new laws and regulations for women’s safety and violence. It was also highlighted that a significant number of women do not want to visit police stations or do cases against the culprit because of the extended timeframe in seeking justice. As per DIG Amena Begum, the cyber support team is run by female officers. It is done for the sake of the victims so that they do not feel comfortable in sharing the details of the incident with male reporting officers. Moreover, an online curriculum is developed where 200,000 police forces will be trained on gender sensitization. An SSC-passed employee of the police force is not sensible enough in gender sensitization as they have not learned about it either from the family or in textbooks. We need to change this scenario.

The session ended with the conversation of Anisul Huq, the minister of law where he said, “it is a rooted societal problem, we need to create awareness in society. Today, we have a good opportunity to do it. If we act vocally towards the oppressions, culprits would refrain themselves from wrongdoings. I am talking about the societal approach as there are already many laws and news laws can be made too”. The discussions on policy Café showed the true scenario and concerns that the women in our society have been dealing with. It is expected that the outcomes from this meeting would be beneficial in securing the safety of women in Bangladesh.

Why violence against women shows no sign of slowing down?