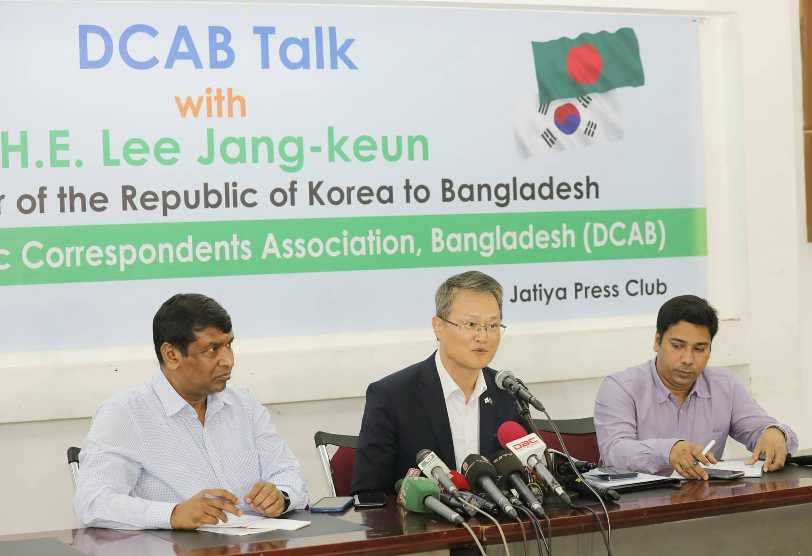 South Korean Ambassador to Bangladesh Lee Jang-Keun has stated that his country will raise its Economic Development Cooperation Fund (EDCF) credit to Bangladesh from $700 million to $3 billion.

“This sum will be executed over the next five years, from 2022 to 2026,” he disclosed at the “DCAB Talk” held at the Jatiya Press Club. The event was arranged today by the Diplomatic Correspondents Association of Bangladesh (DCAB).

EDCF is a scheme that helps developing countries improve their social and economic conditions. The EDCF is also referred to as a soft loan from South Korea. It has an interest rate from 0.01 percent to 0.04 percent only. Till date, Bangladesh has received 27 loans from South Korea under the EDCF worth $1.34 billion. Previously, a soft loan amounting to $700 million for a five-year period between 2021 and 2025 was agreed between the two nations. Now, the amount will rise to $3 billion.

YOU CAN ALSO READ: IMPACT OF EXTERNAL DEBT ON BANGLADESH ECONOMY

In response to a question during today’s discussion, Lee stated, “There have already been discussions between Korean Agencies and Bangladesh’s Economic Relations section. The discussions are about the projects they could implement under this agreement. But just as the Bangladeshi government has its own objectives when working with Korea, so do us in respect of the priority areas. ICT, education, transportation, energy, and the environment could be among top objectives. However, it is simply a generalization; more discussion is required of the particular regions.”

In December 2021, Bangladesh and South Korea signed an agreement for a $100 million loan from South Korea’s Economic Development Cooperation Fund (EDCF). Bangladesh took the loan to help the country’s economy recover from the COVID-19 pandemic. The “Program Loan for Sustainable Economic Recovery Program (Subprogram)” concessional loan had a simple interest rate of 0.5% per year. The maturity period will be 40 years, which also includes a 15-year grace period.

Bangladesh is the third largest recipient of South Korea’s official development assistance (ODA). To aid Bangladesh’s attempts to combat the Covid-19 pandemic, the Republic of Korea had offered a $50 million EDCF loan as financial support in December 2020.

Lee said “Korea is the fifth largest foreign investor”, adding that these all indicate how the ties between the two nations are developing. At the commencement of his service in Bangladesh, the ambassador stated three primary goals for his work: diversification, advancement, and generation. He also expects further boost in bilateral ties between Bangladesh and Korea.