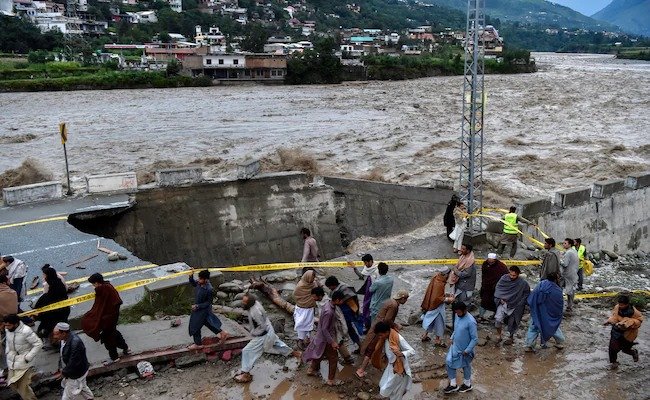 As Bangladesh Prime Minister Sheikh Hasina today (on Tuesday, August 30) announced to send relief materials for the heavy flood-affected people of Pakistan, it became even more evident as to how the South Asian country has been struggling with the natural disaster. In fact, Pakistan’s Climate Minister Sherry Rehman today said one-third of her country is completely under water due to the ongoing heavy floods. Mentioning that roads, houses and crops were swept away by the devastating flash floods, she called it a crisis of unimaginable proportions, which has caused severe havoc across Pakistan.

The number of death in the country has already exceeded one thousand due to this ongoing flood. British media BBC has revealed the appalling information. Ms. Sherry Rehman told BBC, “Here it is like a huge ocean. There is no dry land to pump away the water.” The climate minister told AFP, “Literally, one-third of Pakistan is under water right now.” According to her, “This scale of disaster is beyond all previous limits. We have never seen anything on such a scale in the past.”

Pakistani officials quoting relevant sources said on Monday that 75 more people died in floods in the last 24 hours. Apart from this, it is feared that the number of dead may increase as the flood situation does not improve. According to Pakistani officials, at least 1,136 people have died in the floods since the onset of the monsoon season last June. Pakistan’s government has blamed climate change for the heaviest rains and floods on record in a decade. More than 33 million Pakistanis have been affected by this ongoing flood in Pakistan. In other words, one in seven Pakistani historians have been affected by the floods, officials said.

Apart from this, Pakistan’s Planning Minister Ahsan Iqbal has said that Pakistan has lost 10 billion US dollars due to this terrible flood. In an interview given to the news agency Reuters, he said, “We have faced a lot of damage. Initially, we estimate that Pakistan has suffered a loss of more than one billion dollars.” Iqbal also said, “So far we have lost more than a thousand people. About one million houses were damaged. People actually lost their entire livelihood.”

Investigation for the reason behind the disaster in Pakistan shows that heavy rains have occurred in Pakistan this time. The southern provinces of Sindh and Baluchistan in Pakistan are suffering unprecedented levels of rainfall. Experts say that climate is changing in this subcontinent as part of the whole world. Pollution is a major reason behind this. Due to these reasons, heavy rains have occurred. Also, China has turned their desert areas into crops. It has also affected the entire subcontinent. As a result, rainfall has increased.

In Pakistan, the majority population live along the Indus River that flows from the Himalayas, through most of the country down to the Arabian Sea at Karachi. During monsoon season in July and August, Indus is prone to flooding and it has been accelerated due to the climate change.

In the northern Himalayan regions, Pakistan is home to more glaciers than anywhere else in the world outside the Arctic and Antarctic. Rising global temperatures, which reached almost 50C in the city of Nawabshah, Pakistan earlier this year, are causing those glaciers to melt which escalates the chance of heavy rain.