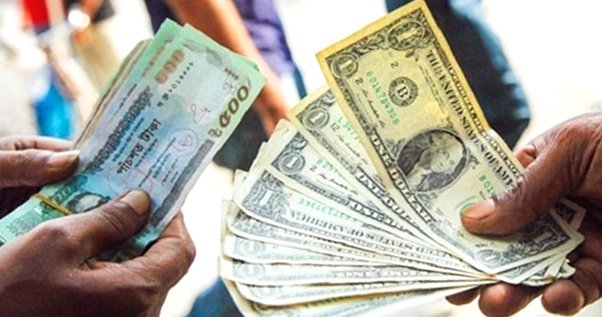 Of late, the dollar to taka conversion rate has become an indicator of the state of the country’s economy. It has been roughed up by the ongoing economic predicament worldwide. In fact, people got used to a dollar-taka rate of around 85 for quite a long time – with the so-called stability getting broken only recently amid dollar crisis as the exchange rate of the American greenback continued spiking exorbitantly.

But the reason behind it was not just anxiety about the falling taka but greed of the dealers as well, a recent UNB report suggests. Speculators and market players who used the rising price to cash-in made the situation even worse. And it wasn’t just the dealers and black-market players, but authorised money exchangers and big banks too.

As the country’s central bank, the Bangladesh Bank (BB) continued to dither for over a month before some actions were taken. Finally, control mechanisms and market forces have pulled the rates down from the peak of 120 to 112 although these are just indicative numbers. What it may be saying is that currency volatility is here to stay for a while. These rates are certainly not staying there.

You can also read: Taka further depreciated by 40 paisa against dollar

Media reports say that many had begun hoarding dollars and a new band of dealers had entered the market pulled in by the quick climbing rates along with the old one. Hoarding and selling currency is an old game, but when scheduled banks become shady currency traders it’s unusual although not unexpected. That six top banks were named and punishments were meted out is a significant matter.

It’s significant because the banks are top notch functioning ones and the decisions were not politically inspired, rather financial discipline-based. It sent out a message that restrictions were on. Now the BB has asked the respective banks to investigate and act.

Money exchangers and other kerb market dealers have also been brought under some discipline by restricting their buying and selling margins. As restrictions on import have impacted, the pressure on dollars has eased a bit. While remittance is up this month, BB had admitted more dollars are being spent than earned. So, the situation remains dicey.

The currency speculators who were hoarding dollars have now started apparently to sell off as prices are not shooting up. Those who have bought around 112 may face loss as the market may hover around this rate for a while. Observers, however, have pointed out that this rate too is not exact and the dollar may settle at its actual rate over time, which could be higher. Thus, rate swings are to be expected.

Apart from the difficulties posed by politically convenient decisions, the scenario shows that the BB or the authorities were lazy in taking decisions, they hadn’t read the situation well when the upward swing began. This period of more than a month, when the dollars went into a free fall, was avoidable, but was not avoided. Actions came much late and only when the political costs became possible. Since the BB is not an autonomous monetary management body, the buck goes and stops at the cabinet doors.

Tough situations can be softened significantly by tough decisions, but decisions need to be taken quickly with expertise to back them. That’s what the BB needs to prove.