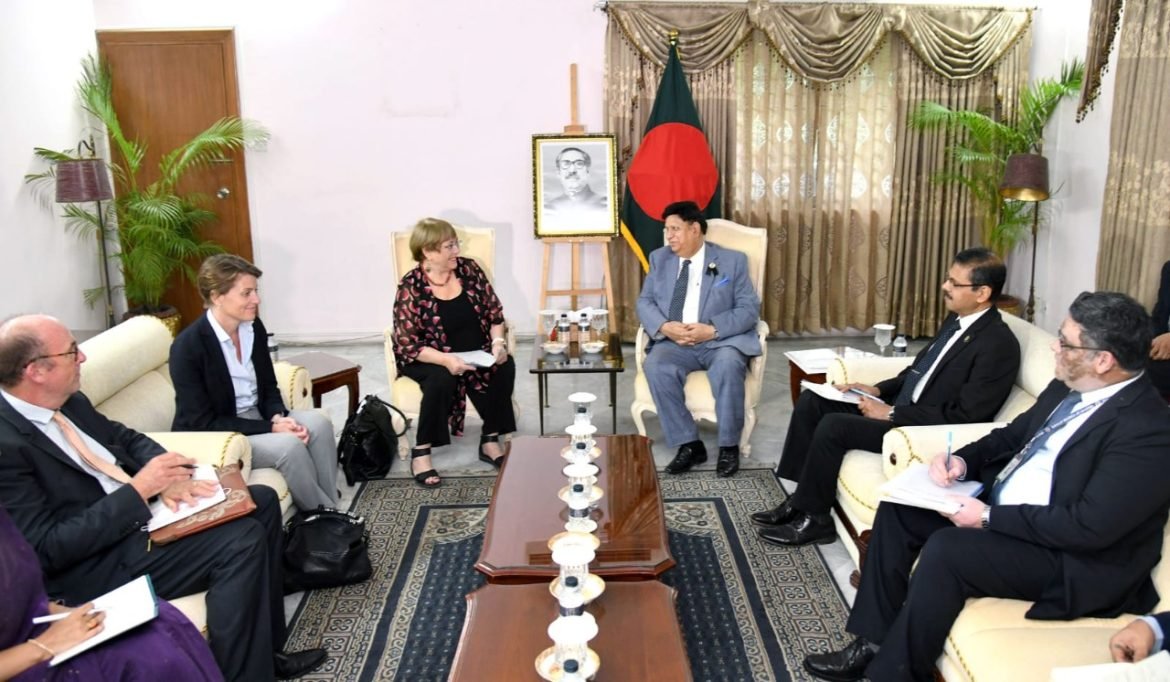 On the last day of her Dhaka visit, United Nations (UN) Human Rights Commissioner Michelle Bachelet attended a seminar organised by Bangladesh Institute of International and Strategic Studies (BIISS) on August 17. In the interactive session titled “Young Scholars’ Meet” with the UN High Commissioner for Human Rights, various issues were raised by the participants. The focus of the discussion was on how climate refugees can be a problem for a developing country like Bangladesh.

The ongoing visit of Michelle Bachelet to Bangladesh is very significant for the country. Because, in Bachelet’s meeting with the top officials of Bangladesh, vital issues like the country’s human rights situation, Rohingya repatriation and media freedom came up.

Acknowledging Bangladesh’s great difficulty in dealing with the Rohingya crisis, UN High Commissioner for Human Rights Michelle Bachelet has assured the country about UN’s continued efforts to realise safe and voluntary return of the Rohingyas to their homeland- Myanmar. She made the assurance in a meeting with Foreign Minister Dr AK Abdul Momen on August 14. On the other hand, Dr Momen mentioned in the meeting that the protracted stay of the displaced Rohingyas in Bangladesh bears the risk of spreading radicalism, transnational-crimes and thus may hamper regional stability.

Also you can read related another topic about PROMOTING, PROTECTING HUMAN RIGHTS IN FOCUS AS TOP UN OFFICIAL ARRIVES

The Bangladesh side urged her to extend their support in Rakhine state for creating a conducive environment for the Rohingya repatriation. Foreign Minister Momen urged the High Commissioner to use her good office to effectively engage with Myanmar and ask to repatriate the forcibly displaced Rohingyas to Myanmar. The Minister also urged the UN system, including UNDP, to undertake projects in Rakhine to create a conducive environment for the return of the Rohingyas.

Michelle Bachelet has urged the international community to scale up their support for the Rohingyas to help them face the consequences of the current global economic crisis. “I would insist that the international community should not abandon the Rohingyas and continue supporting, and looking at if they can even scale up their support because of the consequences,” she said after visiting the Rohingya camps in Cox’s Bazar. The High Commissioner who is set to conclude her visit later today further said, “I must say, all the Rohingyas have said: we want to go back, but we want to go back when we can have an identity as citizens of Myanmar. When our rights are respected, we can have our livelihoods again and we can have land and we can feel that we are part of the country.” She reiterated the importance of continuing to ensure that safe and sustainable conditions exist for any returns and these are conducted in a voluntary and dignified way.

During her visit, Bachelet had meetings with the Foreign Minister, Home Minister, Law Minister and Education Minister. On August 15, the visiting UN High Commissioner paid homage to Father of the Nation Bangabandhu Sheikh Mujibur Rahman at Bangabandhu Memorial Museum. The Foreign Ministry of Bangladesh arranged a dinner with the visiting UN human rights chief where several other important diplomats and government officials were also present. The guests of the programme include; State Minister Shahriar Alam, US Ambassador Peter D Haas, EU Ambassador Charles Whiteley, Indian Ambassador Vikram Kumar Doraiswami and others. Michelle Bachelet, who was an elected president of Chile on two occasions (2006–2010 and 2014–2018), is scheduled to meet Prime Minister Sheikh Hasina Today. And, apart from her meetings with the Prime Minister and Cabinet members of the government, she will interact with the National Human Rights Commission, youth representatives, and leaders of the civil society organizations (CSOs).

Law Minister Anisul Huq, during his meeting with Bachelet, briefed her on the progress made on the reviewing of the Digital Security Act (DSA), an area on which both sides are working together on, underscoring that the DSA was enacted to combat cybercrimes. Noting that Bangladesh is working towards establishing a social order where human rights are guaranteed, he also underscored the need for further international support for human rights training.

Home Minister Asaduzzaman Khan depicted the UN side how Bangladesh suffered from political violence and terrorism in past, and how the government has ensured safety and security combating all these challenges. The Minister, in response to the High Commissioner’s query, elaborated the government’s ‘sincere efforts’ to fully implement the Chittagong Hill Tracts Peace Accord. He also highlighted the prevailing religious harmony in the country.

Education Minister Dipu Moni briefed High Commissioner Bachelet on the measures undertaken by the government to ensure quality education, including introducing new curriculum, skill development initiatives, and stipends for female students and access to education for disabled persons. She also informed about the inclusive measures taken for the third gender people.

Bangladesh has conveyed to visiting Michelle Bachelet that there is no ‘enforced disappearance’ and no restrictions on media freedom and civil society in the country. In this regard, Foreign Minister Dr Momen underscored the fact that, in Bangladesh the media is operating freely, with a large number of television channels and newspapers. The Minister also briefed the UN human rights chief that the perception of restrictions on media freedom is not true. Dr Momen said, “I see the media is very strong in the country.”

To conclude, during the consecutive meetings, Bangladesh hoped to benefit from an objective appreciation of the human rights High Commissioner regarding the achievements of the country, despite challenges. The visiting UN High Commissioner remains well aware of the plethora of achievements of Bangladesh in the human rights domain, including through the treaty-body reporting as well as through other mechanisms, the Foreign Ministry says after the meeting between Bachelet and the Cabinet members. The country also hoped that the chief of UN human rights mechanism would witness by herself how the country is doing miracles to keep on track their development journey; integrating human rights into it. Despite the ongoing pandemic, no one in the country has died of starvation, said the government, adding that, “No one is getting killed either in shopping malls, schools or worship places in Bangladesh.”