GOVERNMENT AND ARMY TO TAKE STRICT MEASURES TO MAINTAIN 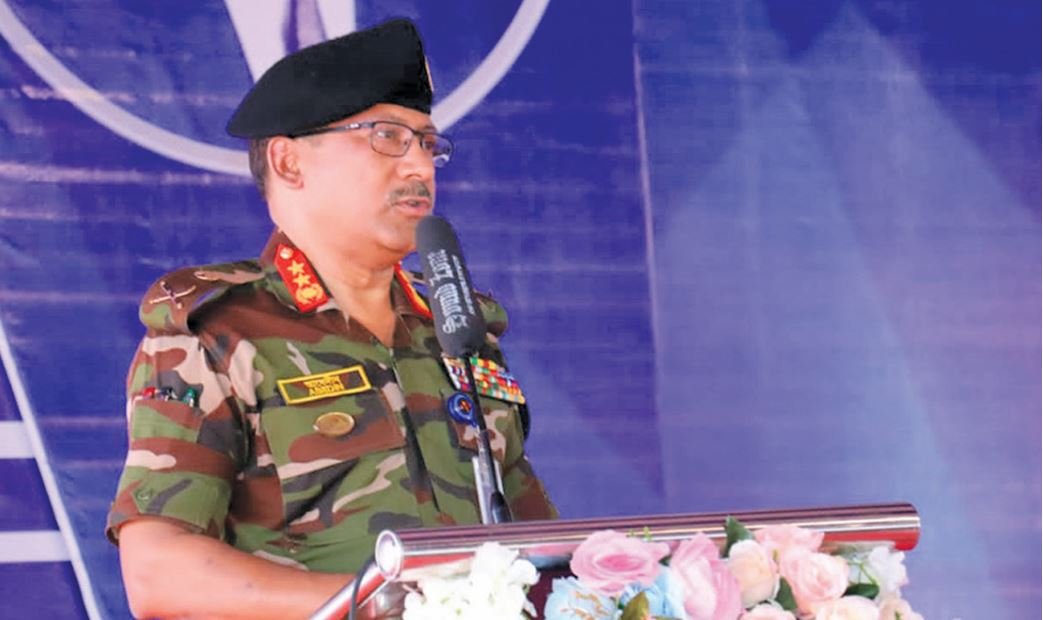 On 26th May 2022, Home Minister Asaduzzaman Khan Kamal laid the foundation stones of the regional office and three APBn offices in the three hill districts. Minister Kamal and other dignitaries from the government, Bangladesh Army and other security forces present in the ceremony addressed the utmost importance of peace and security in the region in the adjunct rally. Major General Mohammad Saiful Abedin, BSP, ndc, psc, the GOC of 24th Infantry Division of Bangladesh Army gave a staunch warning to armed insurgent groups to defend the peace in the Chittagong Hill Tracts, reports PRESS XPRESS

Historical Chittagong Hill Tracts Peace Accord was signed between Bangladesh Government and Parbatya Chattagram Jana Sanghati Samiti (United People’s Party of the Chittagong Hill Tracts) in 1997, the political appendage of the Shanti Bahini militia. Even 25 years later of that historical treaty, some native armed groups still terrorize and extort native and non-native peoples of the hills alike. With accordance to the treaty, Bangladesh Army has left some camps abandoned. Home Minister Asaduzzaman Khan Kamal stated that Armed Police Battalion, Rapid Action Battalion, and other security forces will now take over those camps to maintain security in the hilly areas.

The Home Minister stated, “The government will take stern action against the extortionists and terrorists. Government will do everything necessary to stop the bloodshed, violence, and extortion in the hills. The hugely potential Chittagong Hill Tracts (CHT) area will never be given a chance to become restless again.” He also acknowledged, “Bangladesh Army has worked for long decades to maintain peace in CHT. In accordance with the Peace treaty and discussing with the Army, we have decided to put police camps to replace the abandoned ones. To maintain peace and order in the Chittagong Hill Tracts we will deploy whichever force is necessary. The terrorists and extortionists, who are extorting and shedding blood using different names, will be brought to face the law. This is our promise.”

Chattogram Hill Tracts Affairs Minister Bir Bahadur Ushwe Sing said, “If we are on the path to peace, there is no need for frequent camps, police, and law enforcement. If not, the law enforcement will do whatever it takes to secure peace.” Inspector General of Police Dr. Benazir Ahmed pointed, “Recently in the hilly areas, a few groups are involved in criminal activities including extortion, murder, and kidnapping. If these terrorists do not give up their misdeeds and return to normal life, the law enforcement agencies will eradicate them with help of the citizens.”

STERN WARNING TO THE TERRORISTS

Major General Mohammad Saiful Abedin, the general officer in command of 24th Infantry Division and Area Commander, Chattogram Area gave a resilient speech to warn the armed groups and the state of the CHT. In an insightful speech he said, “Chittagong Hill Tracts Peace Accord was signed to bring peace in the region. The peace that eradicates fear. But are the native and Bengali peoples living in the hills free from that fear? No, they are not. Because the accord was not materialized as it should have been. The responsibility for implementation of this accord does not lie only to the government. It was a bilateral treaty. The other party was the United People’s Party of the Chittagong Hill Tracts. There are 72 clauses and 99 sub-clauses in this accord. Bangladesh Government was responsible for implanta- tion of almost all the clauses. UPPCHT was supposed to only implement two clauses. Bangladesh government has fulfilled 69 sub-clauses already. From the rest 0, 15 sub-clauses have been partially implemented, and the rest are also on their way. The clause “D”, paragraph 13 and 14 of the treaty stated UPPCHT will submit all the arms and all the armed cadres in their rank will surrender. This is never materialized. So, the question can be asked who has the less goodwill amongst the two signatories. I leave the judgement to the people of CHT”

He continued, “The UPPCHT is now divided into many groups who are openly or secretly extorting money from the innocent citizens living in remote and distant areas, natives, and Bengalis alike. These groups are using these money to buy more arms to create dominance over each other and keep citizens of CHT at unease. I would like to call on the citizens to not be afraid of these thugs. You have the right to ask for protection from us. Give us the information and let us help you. If you give into these extortions silently, we are unable to help you. Today’s Bangladesh Army is not that of 70s, 80s or even 90s.” He pointed out, “There are 51% tribal citizens and 49% non-native citizens living in CHT. It is impossible to create peace with exclusion of the non-natives. Those who asks that the non-natives to be moved to somewhere else in Bangladesh are building a castle in the air. Those amongst the UPPCHT leadership asks such im- possible task, I would like to ask them to come down from such high horses. This is an irrational, indecent and impossible proposal.” Addressing the terrorist and armed groups directly, Major General Abedin asked, “If you want war, come forward. You use this remote landscape to keep mercenary activity alive by extort- ing innocent villagers for food and money, use them as human shields. You move from one hill to another at night and attack us from far. If you come forward in a battleground you won’t last for thirty minutes against the might of the army, the police, RAB or BGB. If it was another area of Bangladesh, you would not even stand a chance against Bangladesh Ansar forces.”

Major General Abedin concluded by saying, “I would like to ask everyone to come forward to implement the peace accord which Honorable Prime Minister Sheikh Hasina has signed. She has promised the full implementation of the accord. I would like to ask the UPPCHT fringe groups to show the goodwill by fulfilling their two clauses of the agreement before Bangladesh government fulfill the remainder of the clauses. Submit your arms and surrender.”