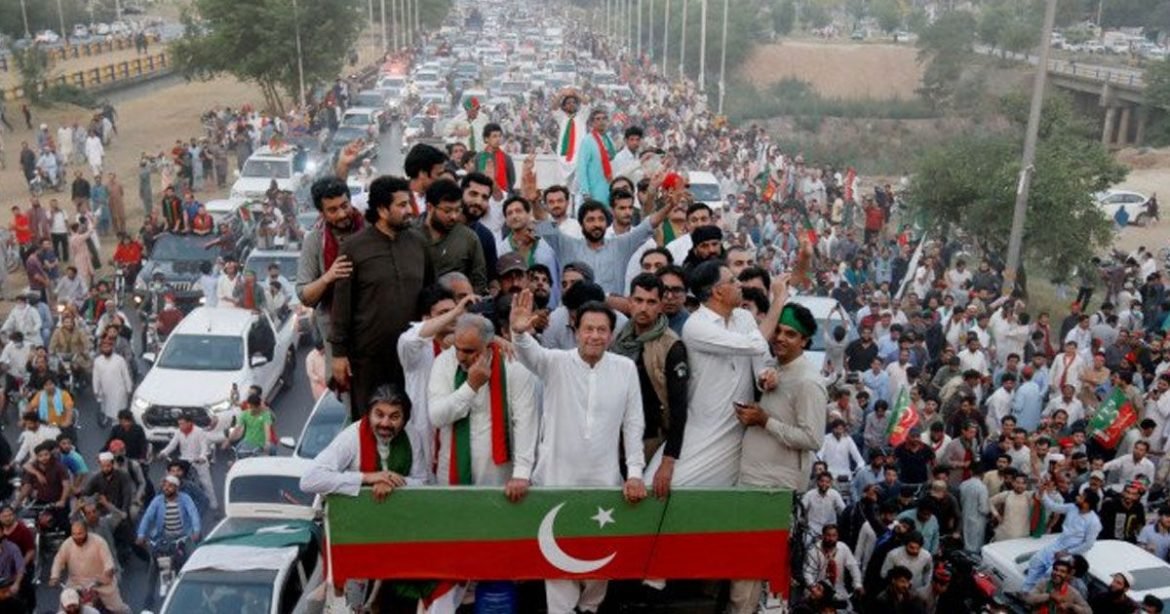 As wrangling over state power continues in trouble-torn Pakistan, Shehbaz Sharif defeated Imran Khan in a no-confidence vote and became the Prime Minister of the country. On the other hand, Imran, former Prime Minister of the Pakistan and chairman of the political party Pakistan Tehreek-e-Insaf (PTI), is campaigning for free and fair elections. All in all, the situation in Pakistan is volatile.

Recently on May 25, ousted Prime Minister Imran Khan gave a six-day ultimatum to Shehbaz Sharif’s government to dissolve Pakistan’s parliament and announce a new election date within the period. PTI chief Imran Khan arrived in the capital Islamabad on Thursday morning, 30 hours after the start of the long march from Khyber Pakhtunkhwa province. Democracy-Chowk square in the capital of Pakistan was the destination of the long march called ‘Azadi March’ (Independence March) which started on Wednesday. The former cricket star Imran has announced that he will continue his long march until the demand is met. Imran warned that he again march if government fails to set fresh polls in six days.

On the other hand, Pakistan’s law enforcement put container trucks on the way of the long march to prevent it from reaching D-Chowk. Shehbaz Sharif’s government has also ordered the deployment of troops to strengthen security at key installations such as the Supreme Court, the parliament building, the prime minister’s and president’s residences, the secretariat and the diplomatic area. The measures came following clashes between demonstrators and police.

Khan began his march toward Islamabad from the northwestern city of Peshawar. Clashes initially erupted in the eastern city of Lahore, when riot police fired tear gas and pushed back hundreds of demonstrators who hurled stones as they tried to pass a road blocked bridge near the city to board busses bound for Islamabad. Dozens of Khan’s followers also briefly clashed with police in Islamabad, where the demonstrators set fire to bushes lining a main boulevard, sending smoke and flames rising into the sky. Altercations were also reported elsewhere, including in Karachi, where demonstrators burned a police vehicle. At least a dozen demonstrators and several policemen were injured.

Khan himself traveled by helicopter to a highway some 100 kilometers (62 miles) northwest of Islamabad, where he condemned the police crackdown and urged supporters to join the rally. The government on Wednesday responded by launching a crackdown and arrested more than 1,700 Khan’s supporters. The measures were announced after a policeman was killed Tuesday during a raid on the home of a notable Khan supporter in Lahore.

Imran Khan, a former cricket star turned Islamist politician, was prime minister for over three and half years until being ousted last month by a no-confidence vote in Parliament. Since then, he has held rallies across the country, saying his removal from office was the result of a US-organized plot and collusion with Sharif. But, both have denied the allegation.

Prime Minister Shehbaz Sharif has called on the people of Pakistan to reject the politics of “non-ideology”. Pointing to former Prime Minister Imran Khan, he said that the main reason for the current economic crisis in Pakistan is “non-ideal” politics. On Thursday, Shehbaz went to inaugurate a hydropower project in the village of Karot, 65 km from the capital Islamabad. Addressing Imran there, he said, “The main reason for the current economic crisis in Pakistan is the politics of non-ideology.” ‘That politics has started again. We should never follow the politics that divides the nation. What message do you (Imran Khan) want to give to the people through long march-strike? In a later tweet, he said, “Pakistan’s development depends on hard work. It is my firm belief. The politics of the ultimatum is detrimental to both development and stability of the country. ‘ ‘The people of Pakistan want to overcome the various challenges that exist in the country, and it is our responsibility to lead the people in that. Nothing can stop us from fulfilling our responsibilities and the people will reject the politics of non-idealism.’