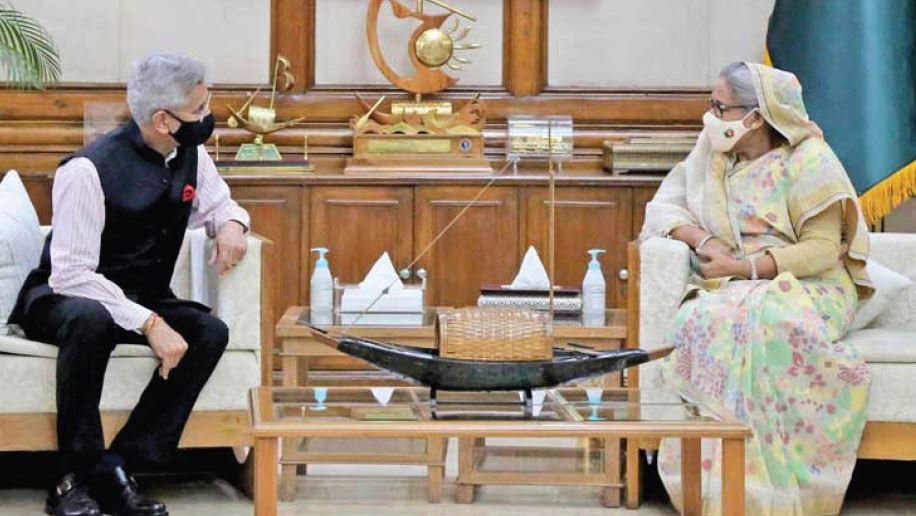 External Affairs Minister S Jaishankar is on a two-day visit to Bangladesh during which he will hold wide-ranging talks with his Bangladeshi counterpart to further deepen bilateral ties. Different issues of mutual interest came up in the meetings during Indian FM Jaishankar’s recent Dhaka visit. Defence collaboration, upcoming Joint Consultative Commission meeting, regional cooperation and connectivity, current Covid-19 situation, and impacts of Russia-Ukraine war on the global economy, among others, dominated talks. Both sides stressed following up the decisions taken at the highest level for their effective implementation aimed at mutual benefit, writes SM TANJIL-UL-HAQUE

As neighbouring India wants to strengthen solid sub-regional cooperation in communication and other sectors with Bangladesh, Indian External Affairs Minister Dr Subrahmanyam Jaishankar’s recent Dhaka visit was aimed at taking the ties forward while engaging in further areas of cooperation between the two next-door nations. The regularity, geniality and casualness of the interactions between Dhaka and Delhi is a splendid reflection of the trust and confidence. And this is what prompts the leaders of these two countries to remain in touch pretty often as has been reasserted by Jaishankar’s latest trip.

On April 28, he had a joint press briefing with his Bangladeshi counterpart Dr AK Abdul Momen in Foreign Service Academy, Dhaka, where he said regular communications between India and Bangladesh have progressed despite the Covid-19 pandemic. He said that he visited Dhaka with the aim of advancing the relations as well as intensifying bilateral cooperation. During the visit, Jaishankar held meeting with Foreign Minister AK Abdul Momen. Last year, the President and Prime Minister of India visited Bangladesh for the first time in history. The Indian minister described that visit as a milestone in the long and tested relationship of the two countries. On the other hand, his Bangladesh counterpart said the two countries are working together to resolve some major issues. He mentioned that both the sides renewed commitments to resolve the pending issues as they have the spirit to work together.

The Indian minister conveyed to Prime Minister Sheikh Hasina the personal greetings and good wishes of Prime Minister Narendra Modi. “We look forward to her visit to India at a time of her convenience,” he said. On April 28, Jaishankar met the PM at Ganabhaban and conveyed Modi’s invitation. At that time, there was a sincere discussion on geopolitical issues and some other issues of mutual interest for both the countries. After the meeting, Jaishankar said that he was looking forward to PM Sheikh Hasina’s visit to India.

Previously, Indian PM Narendra Modi paid a state visit to Bangladesh at the invitation of Sheikh Hasina in March last year to join the celebrations of the Golden Jubilee of the Independence of Bangladesh, the birth centenary of the Father of the Nation Bangabandhu Sheikh Mujibur Rahman and 50 years of establishment of diplomatic relations between India and Bangladesh. At the invitation of President Abdul Hamid, Indian President Ram Nath Kovind also paid a state visit to Bangladesh last year to attend the 50th Victory Day celebrations as the guest of honour.

Offering Chattogram port for use

Prime Minister Sheikh Hasina on April 28 said that India’s north-eastern states like Assam and Tripura can use Bangladesh’s Chattogram seaport by strengthening the connectivity between the two neighbouring countries. She said, “If the connectivity is increased, the Indian north-eastern states like Assam and Tripura can have access to the seaport in Chattogram.” She said this when the visiting Indian External Affairs Minister S Jaishankar called on her at her official residence. Hasina said an initiative has already been taken to reopen the cross-border routes, which remained shut since 1965.

While meeting the PM, both the parties expressed happiness at the state of existing bilateral relations between the two countries. PM Hasina was of the view that the high-level visits between the two countries give impetus to carry forward the relations. On the other hand, the Indian Minister said the bilateral issues are being reviewed and things are progressing well. He, however, on April 28 said, “The purpose of this visit is to take the relationship between the countries further. A relationship of trust and confidence has already developed between us. This afternoon, I had the opportunity to meet the Prime Minister. I have conveyed message and greetings from the Prime Minister of India to her. I have told the Prime Minister that we are looking forward to her upcoming visit to India. We also discussed regional and international issues outside of our bilateral relations.” Foreign Senior Secretary Masud Bin Momen, PMO Senior Secretary Mohammad Tofazzel Hossain Miah and Indian High Commissioner to Bangladesh Vikram Kumar Doraiswami were present in the meeting.

After his meeting with the Prime Minister, S Jaishankar held discussions with Dr Momen at the Foreign Service Academy in the capital. Different issues of mutual interest came up during the meeting as the ministers ‘comprehensively’ discussed the bilateral issues. Besides, issues like defence cooperation, water sharing of Kushiara and Feni Rivers, current Covid-19 situation, and impacts of Russia-Ukraine war on the global economy also came up for discussion. Both the ministers discussed socio-economic issues in the meeting. Jaishankar lauded Bangladesh’s socio-economic development under the able leadership of PM Sheikh Hasina. He emphasised on the need to focus on trade and communication between the two countries as the coronavirus pandemic and the Ukraine war disrupted the global supply chain. He assured India’s cooperation in Bangladesh’s areas of concern, including the repatriation of displaced Myanmar nationals. A press release issued by the Ministry of Foreign Affairs later quoted Jaishankar as saying that Bangladesh and India have maintained excellent relations even when the world was stagnant due to the effects of the pandemic. Foreign Ministers of the two countries also discussed the possible date of the visit of the Prime Minister of Bangladesh to India as part of strengthening this relationship. Both sides stressed on following up the decisions taken at the highest level for their effective implementation aimed at mutual benefit.

Holding next JCC Meet in Delhi

India is looking forward to invite the Foreign Minister of Bangladesh to the seventh meeting of the Joint Consultative Commission (JCC) of the two countries. This discussion will play a helpful role in taking the relations between the two countries to the next level, said the Indian Foreign Minister. Before PM Hasina’s planned India visit, the next round of JCC meeting will be held in New Delhi, most likely by next month. The JCC will be co-chaired by Momen and Jaishankar. Mentioning that the JCC meeting will provide opportunity to lay the ground for the next level of the relationship, Jaishankar said they are waiting to welcome Dr Momen in New Delhi. Asked about the issues to be discussed in the next JCC, Momen said Bangladesh will raise all the outstanding issues in the meeting. Asked about the Teesta River water sharing and border killing issues, he said Bangladesh always raises these issues and will reiterate those. The sixth meeting of the JCC was held on September 29, 2020. Although Dhaka was scheduled to host the meeting, the meeting was held on a virtual platform due to the pandemic situation.

Referring to India’s interest in launching new projects in the power and energy sector, Jaishankar said, “Covid-19 has taught us how important it is to maintain a regional supply chain. India wants to see strong sub-regional cooperation.” He said that India has a lot of common interests in the hydropower sector and there are many opportunities for regional cooperation. “India will play a leading role through partnership in hydropower generation, transmission and trade,” he added. He made the remarks at a joint press conference after the meeting of the foreign ministers at the Foreign Service Academy in the capital.

Indian Foreign Minister S Jaishankar stressed that Bangladesh is the most important part of India’s foreign policy as part of giving priority to the neighbouring nations. Both the ministers after the meeting evaluated the importance of each other. Foreign Minister Abdul Momen said India is the most important neighbour for Bangladesh. They also noted that the two nations have made significant progress in a number of areas in the last few years.

S Jaishankar declared that after the Eid holiday, cross border bus and rail services will be resumed on all routes in India and Bangladesh. He said, “Our connectivity today is back to pre-Covid levels and we are looking at resuming cross-border buses and train services shortly after Eid.”

After the meetings, both the Foreign Ministers praised each other and highlighted the solid partnership between the two countries. Foreign Minister AK Abdul Momen said, “There is a golden chapter now ongoing in the relations between the two countries. Last year marked the 50th anniversary of our independence. Bangladesh and India have made history together. The way the two countries have worked together is unique. We have solved big problems and now both sides have pledged to resolve minor issues. Jaishankar said, “It is always a pleasure to come to Bangladesh. After a little over a year, I came back to Dhaka. Most importantly, we continue to engage in regular discussions with each other during this challenging epidemic. We have made significant progress in our bilateral relations. Our shared endeavour would be to take it forward.”