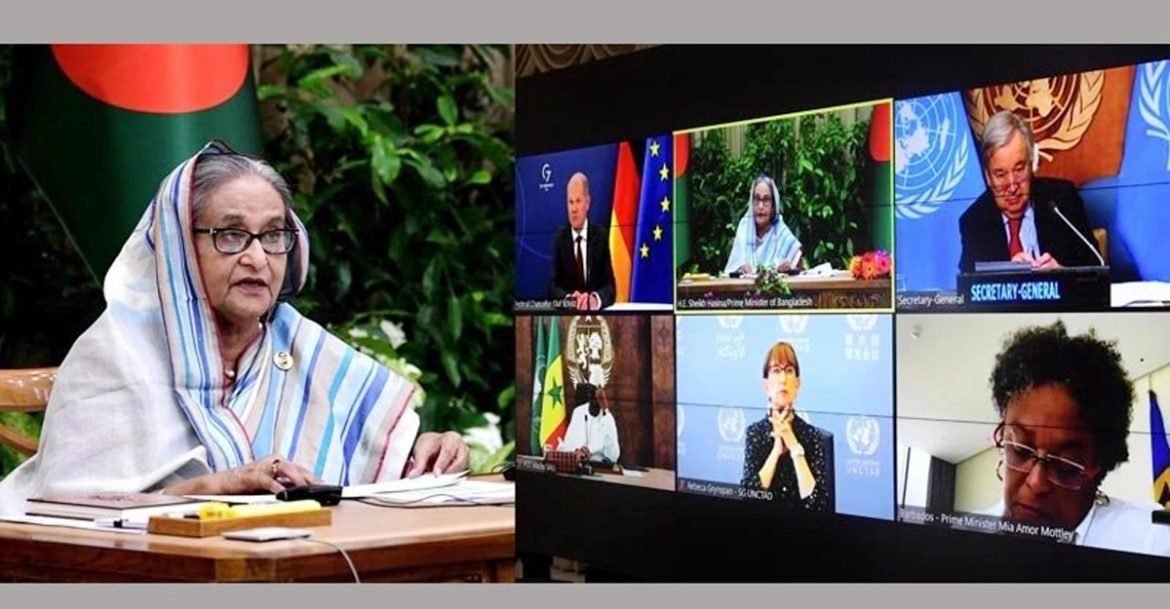 Prime Minister Sheikh Hasina has put forward four proposals aimed at overcoming the global crisis. She has called for strengthening global solidarity and taking concerted action to address the food shortage, power and financial crisis caused by the Russia-Ukraine war and the Covid-19 pandemic.

She highlighted these four proposals speaking at the first phase of the Global Crisis Response Group on Food, Energy and Finance (GCRG) meeting organized by the Virtual United Nations from Ganabhaban on May 20.

She says the war in Ukraine comes at a time when the world is struggling to recover from the pandemic. This war has already put serious strain on the fragile world economy. Highlighting how the Ukraine war is affecting commodity prices, the Prime Minister said Bangladesh has achieved self-sufficiency in food production and ensured energy security. But Ukraine has made the war situation extremely unstable. Supply shortages and abnormal rise in prices of food, fuel and other commodities have already put severe strain on the lives of ordinary people. To overcome this crisis, stop import of luxury goods, stop foreign visits of government officials, increase agricultural production, provide low-cost daily necessities to one crore families through special cards, expand social security network through food and cash assistance to more than 1 crore people, with remittances. The Prime Minister also highlighted the various steps taken by the government including 2.5 percent cash assistance.

In the second proposal, she said, “First, we must strengthen global solidarity and make a concerted effort.” The G8, the G20, the OECD, and the international financial institutions have a key role to play.

In the third proposal, she said that more emphasis on technology support and investment for the agricultural sector was essential for effective food storage and distribution.

She mentioned that there are many potential business opportunities in the field of renewable energy, especially in LDCs. We can take advantage of existing North-South, South-South and Triangular cooperation to advance this agenda. Involvement with the private sector in this regard will also be considered important.