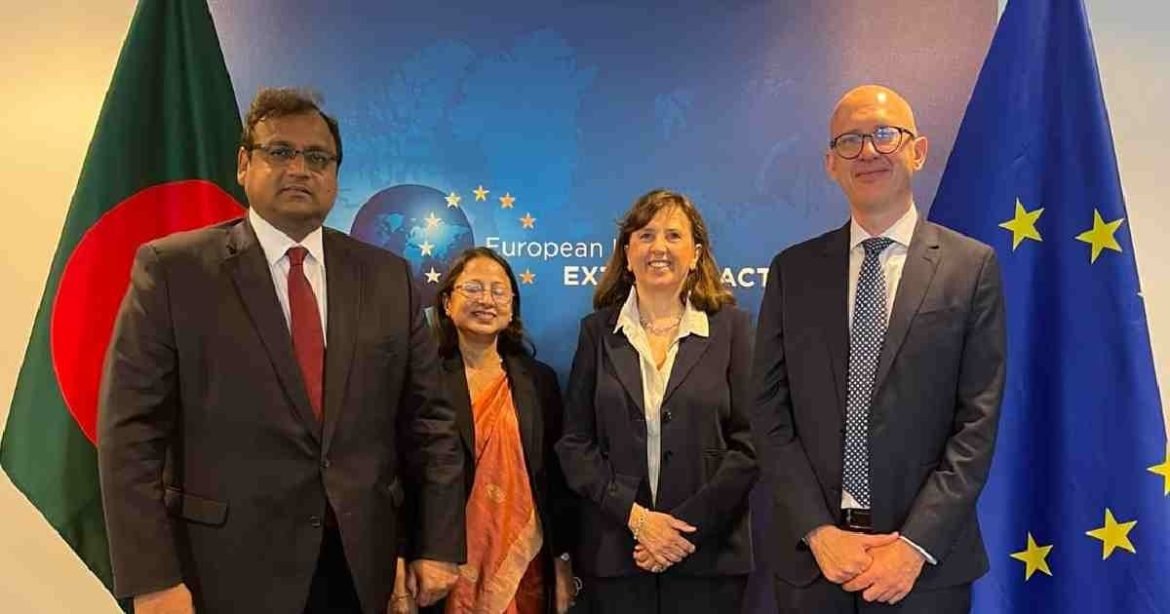 Bangladesh government’s ‘openness’ regarding an international election observation mission for the next general elections has been recognised and welcomed by the European Union (EU).

Bangladesh and the EU held their 10th Joint Commission meeting in Brussels on May 20, in a very constructive and open atmosphere, covering a wide range of issues of common interest where the EU welcomed Bangladesh’s ‘openness’.

The Joint Commission reviewed political developments on both sides and discussed the state of democracy, rule of law and governance, including the importance of holding free and fair elections, according to a message received here from the Bangladesh mission in Brussels; reports United news of Bangladesh.

In the meeting, Bangladesh and the EU exchanged views on respective approaches to the advancement of the rights of minorities, the rights of women and children and to engagement on human rights in multilateral fora. The EU and Bangladesh also discussed governance, democracy, rule of law and human rights, the Rohingya crisis, economic and trade cooperation, migration, climate change, education, development cooperation and regional cooperation.

EU stressed that a vibrant civil society is an important component of democracy, raised concerns over the human rights situation in Bangladesh and emphasized the need to ensure accountability for such violations. EU also raised concerns regarding the issues of civic space and freedom of expression offline and online, notably in the framework of the Digital Security Act (DSA), noting the importance for legislation and its implementation in this area not to go beyond the stated purpose of fighting digital crime and to be in line with international Human Rights obligations.

The EU emphasised that promoting and protecting human rights for all, regardless of ethnicity, age, gender identity, sexual orientation, religious or political affiliation, disability or socio-economic background is crucial for stability, economic growth and development. The EU expressed that it stands ready to provide increased cooperation in view of Bangladesh’s next Universal Periodic Review in 2023.

The Bangladesh side stated that the government is committed to guaranteeing human rights for all as enshrined in its constitution. The government has a ‘zero tolerance’ policy against terrorism and violent extremism and highlighted the remarkable success of the security apparatus in this regard. In this context, they look forward to the first EU-Bangladesh Political Dialogue in Dhaka in June this year.

The EU reiterated its appreciation for the continued generous role and action of the people and government of Bangladesh in temporarily hosting more than a million Forcibly Displaced Myanmar Nationals (FDMNs) or Rohingya refugees for more than four years. Bangladesh thanked the EU for its political and humanitarian support in addressing this humanitarian catastrophe created by Myanmar.

Both side stressed the need for voluntary, safe, dignified, and sustainable return of the Rohingya to Myanmar, and the importance of continued delivery of essential assistance, support, and services. The EU raised the importance of providing perspectives to the largely young population of the forcibly displaced Rohingyas, especially in terms of health, education and livelihoods. Bangladesh welcomed the additional humanitarian aid announced on 20 May, 2022 by the European Union to ensure life-saving support for hundreds of thousands of Rohingya and host communities in Bangladesh.

The EU commended Bangladesh for its continuing success as the largest beneficiary of the EU’s Everything But Arms (EBA) unilateral preferential trade arrangement. EU recalled that EBA preferences are conditional on the respect of human rights, including labour rights, as reflected in the international conventions listed in the GSP Regulation. Sustained reforms of labour rights standards by the government of Bangladesh, and their full alignment with International Labour Organisation (ILO) conventions are crucial in this regard.

In this context, the EU welcomed the finalisation and publication of Bangladesh’s National Action Plan on the Labour Sector and stressed the need for its comprehensive implementation as per the stipulated timelines, for regular updates periodically on its implementation and for trying to advance the timelines of revising the labour law applicable in export-processing zones. Bangladesh reiterated the need for ensuring fair prices, especially in view of the investment being made in safer and greener factories.

To wrap up, in view of Bangladesh’s graduation from least developed country (LDC) status, they agreed on the importance of establishing a predictable and sustainable business climate that will make it easier for trade and investment, removing market access barriers and promoting a sustainable diversification of its economy.

To this end, the EU and Bangladesh remain committed to pursuing and further strengthening the Business Climate Dialogue. The EU and Bangladesh discussed a range of diversified topics and priorities in the field of climate change adaptation and mitigation, with the EU reconfirming, inter alia, its interest to support renewable energy, notably regional hydropower generation, and energy connectivity.