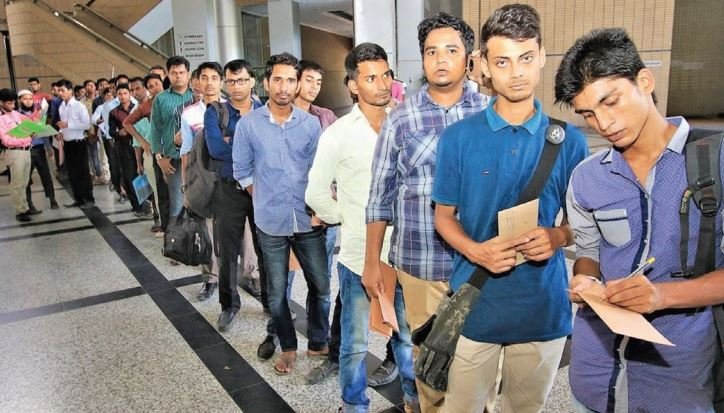 Bangladesh’s 30 percent of the population are young, and the development of a country’s economy depends on young educated people. But research says 37 percent of the country’s undergraduates are jobless. Recent reports indicate that with a higher unemployment rate, crime rate is also increasing as people are engaging in unethical activities and violating crimes due to financial hardship. Indeed, unemployment is one vicious circle that brings all the negative factors to make daily life more miserable, reports Press Xpress

A large portion of the educated young people in Bangladesh are unemployed. They wait for a job year after year even after finishing their higher studies. This crisis has been further escalated by the Covid-19 pandemic. In recent months, one advertisement circulated by a young man with title ‘tuition for rice’ has come to the fore and hogged the newspaper headlines as a glaring example of how extremely the pandemic has created a crisis in Bangladesh’s employment situation.

Before we go into the details, let’s discuss first what’s educated unemployment and to do so we need to specify the nature of unemployment. Regular unemployment refers to those unemployed who are not getting jobs due to their lack of professional expertise, idle nature etc. Educated unemployment deals with those people who have educational certificates, degrees but they are unfortunate enough to not secure a job in the job market or disinterested to look for one.

In general, out of 2 million people who enter the job market in Bangladesh every year, a maximum of 1.6 million are employed, rest remain unemployed. And most of these unemployed are highly educated. This is the major obstacle to a prosperous economy. The flourishing and development of the country’s economy very much depend on young educated people, as in Bangladesh, 30% of the total population is young.

According to a recent research report by the Bangladesh Institute of Development Studies (BIDS), 66% of students who graduated from a reputed university in the country, are unemployed. That means two-thirds of the graduates are unemployed. Only 21% of the students of that institution got jobs after graduation or post-graduation and only 3% are doing something on their own initiative. The research also found out that, among the highly educated in the whole country, the unemployment rate at the postgraduate level is 34% and at the undergraduate level it is 37%.

In 2020, the World Bank conducted a survey on students at a renowned university in Bangladesh. Their research also found that 47% of graduate students were unemployed, and looking for a job for almost three years.

Another survey on man-power by the Bangladesh Bureau of Statistics (BBS) also found that the unemployment rate is higher among educated people in the country, where 47% of educated people are unemployed. 2 million graduates seek job in the country every year. But there is no employment compared to that proportion. As a result, a large part of them remains unemployed.

Among the manpower entering the job market in the country every year, only 5% of employment is in the public sector and 95% in private sources. But after completing their higher education, most of the unemployed waits for government jobs year after year. After attending multiple government job exams, constant failure creates frustration among many because there are no job opportunities compared to the number of job prospects.

Recent news reports indicate that, with a higher unemployment rate, crime rate is also increasing as due to financial hardship people are engaging in unethical activities and violating crimes. This particular population is unable to fulfil their nutritional demand as they have less purchasing power and they have less access to healthcare facilities. Indeed, unemployment is one vicious circle that brings all the negative factors to make daily life more miserable.

To pour water on a drowned mouse

Covid-19 pandemic made the grim situation harder for everyone let alone people working in the formal and informal sectors. The negative impacts of the epidemic are very evident. Nonetheless, before Covid-19, several factors have already existed to create obstacles for unemployed people. Overpopulation is one of the issues because there is a shortage of investment and lower work opportunities to cope with the higher growth of the population. And from this population, even if they have a degree, most of them lack technical expertise. There needs to be skilled labour regardless of any industry. This is the era of modernization and work trends are changing rapidly, hence the workplace requires skilled workers who are up to date with the latest trends. But, the Covid-19 pandemic came as a curse because at a point the whole country came under lockdown. Everything was closed so the graduates could not attend any courses to improve their skills which heavily caused them in job sector.

Because of this pandemic, there was a temporary movement restriction: lockdown, which created the loss of jobs both temporary and permanent. As there’s a shut down on the major economic sectors got affected such as the transportation sector, construction sector, micro, small and medium enterprises, manufacturing sector, and agricultural sector. Around 28 million people were temporarily jobless due to this pandemic, and the worst victim of this was those people who survive on daily wages and their income dropped by 82%.

Another concern is the raising dropuout situation of Bangladesh. According to the government’s primary data, secondary schools across the country saw a rise in dropouts in a gap of just a year during the coronavirus pandemic with 62,104 fewer students being enrolled in 2021 than that of the previous year. Yet, 200 more secondary schools opened during this period. Thus, number of uneducated person rises and unemployment also rises.

An underdeveloped economy is another concern as it is never easy to employ the majority of people in that situation. This results in a lack of capital following no investment and employment. Many working professionals of non-government institutions lost their jobs due to Covid-19 and are unlikely to return to their workplaces hence, they are unemployed or they are forced to move to low-level incomes. Further, this situation is not about the internal dynamism, people who returned from abroad after losing their jobs because of the pandemic could not return back for a long time. Remittance from these workers has a positive impact on the economy, as many of them cannot re-enter any time soon, the economy of Bangladesh is facing worse consequences.

Existing agriculture dependency creates seasonal unemployment which shapes into disastrous situations for a big number of people. On the other hand, many traditional industries such as cottage industries are vanishing because they cannot compete efficiently with foreign industries. And the workers from these sectors lack the expertise to join foreign investment-based companies.

‘Experience’ has always been a sigh of relief in the huge competition in the job market. Newly graduated students on the other hand, could not find a job due to lack of experience; hence the Covid-19 epidemic began in 2019 made the situation worse as the companies are seeking experienced workers only.

What must be done!

To protect these people the labour-intensive infrastructure projects should be resumed by the government, it will create short-term employment. Government agencies and NGOs who are related to banking sectors should introduce initiatives like digital finances service, formalized banking incorporation, and shared risk in loan provisos to help micro, small and medium enterprises to overcome this situation. These might be the quick solution but these are not solely enough to tackle the situation where the development of skills is needed. Skill development programs should be initiated to train workers and create more diversity in terms of their work skills and scope. But to ensure economic and financial growth for everyone, according to researchers’ poverty, alleviation, employment growth, and elimination of inequality are needed.

There should be a proper indicator to measure income because myopic indicators make the multi-dimensional nature of poverty ignored and unfocused. As a result, poverty alleviation plans and policy formulation fail to cover these multi-dimensional issues. Any recovery plan should be linked to the creation of employment. Economic and social inequality needs to be addressed as the rate of this is higher in Bangladesh.

Government has various existing funds from the ICT ministry still people are not able to get the advantage of it because of the lack of accessibility due to inequalities. Sometimes people get demotivated because of the hierarchy levels to reach the fund, the process is way too complex to solve the problem or reach those people who need it the most. To make this process easy the establishment of an employment information centre should be there which can work rapidly.

However, self-employment facilities empowerment needs to be executed, and to do that people might avoid doing large investments. Initially, they can focus on a “Just in time” investment structure where one can start or set up a business. There should be low-interest loan facilities or networking events to connect with angel investors for the entrepreneurs. If there will be enough support to build entrepreneurs’ businesses there will be an expansion of the industry. This will create more work opportunities and scopes of employment. For the rural area people, they can focus on small cottage industries, poultry, livestock facilities, etc. To help more efficiently monetary and fiscal policies’ expansion should be accepted by the government.

Government and foreign organizations often focus more on establishing educational institutions like universities and colleges. But they often ignore the fact that the majority of the population finds it hard to afford education. They should therefore emphasise more on skilled manpower enriched with technical knowledge. Policymakers should make it low cost or introduce a technical educational institution to train workers from all backgrounds based on their learning level. Albeit, people are attracted to traditional methods of studies more. To induce this group of people there should be an up-to-date curriculum by including subjects that are globally demanding. For the sustainable development of the economy, we need to bring out attention to the investments of technical institutions. There will be more scope for freelancers to earn in international currency if they cultivate skills that will support the economic growth of Bangladesh by bringing remittance.

We should learn from this crisis and work on new notions to reduce the unemployment rate. We need to rethink to bring new opportunities as solutions seem limited. We cannot afford to be myopic or narrow-minded in case of bringing in feasible development. This is the right time to work on multidimensional solutions with regard to solving the ever-growing unemployment problem. Policymakers should build the integration with the new generations and industry experts to understand the economic and social implications and the post-pandemic situational demands. There should be an atmosphere to act like a visionary and cooperate with visionaries to help address the rising concern over educated people’s employment in particular.

Postponed SSC exam to be held in August

GOVT DECIDES NOT TO HOLD JSC-JDC EXAMS THIS...