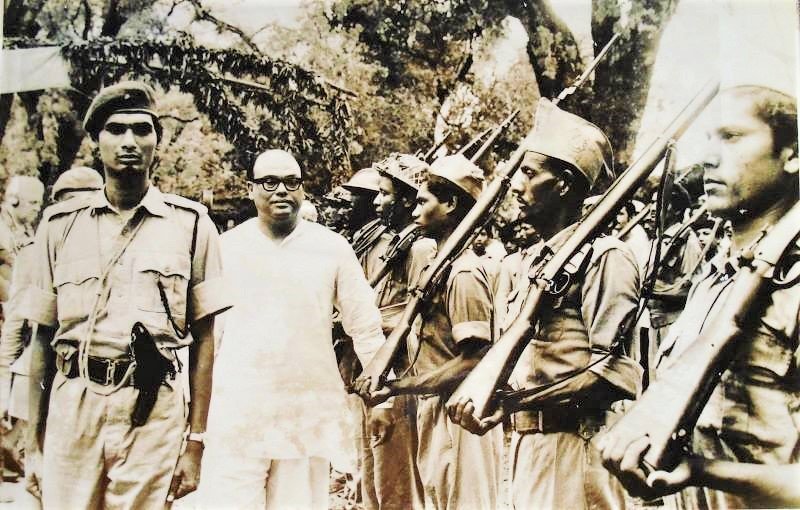 The historic Mujibnagar Day is being observed today marking the oath-taking ceremony of Bangladesh’s first government on 17th April 1971, which led the country’s War of Liberation.

Following Pakistan Army’s heinous genocide on unarmed Bengalis on the black night of 25th March 1971, senior leaders of the then Awami League assembled at Baidyanathtala in Meherpur on this day to form the interim government of independent Bangladesh.

Baidyanathtala, mainly a mango orchard, was later named Mujibnagar after ceremonial formation of the provisional government of Bangladesh. Bangabandhu Sheikh Mujibur Rahman was declared the first president of the People’s Republic of Bangladesh, while Syed Nazrul Islam was appointed the acting president in Sheikh Mujib’s absence.

Later, the provisional government gave successful leadership to the War of Liberation for achieving victory on 16th December. Many newspapers published special supplements while Bangladesh Betar and Bangladesh Television and other private television channels aired different programmes highlighting significance of the day.

INSIDE THE HISTORIC DAY, THROUGH THE MEMORY OF TAWFIQ-E-ELAHI AND AMIRUL ISLAM:

“Not at all; you are not only a witness, you’re a part of the history Tawfiq.” Tajuddin Ahmad uttered these words in reply to Tawfiq-e-Elahi Chowdhury as he thanked the newly sworn-in Prime Minister of the first government of the people’s republic of Bangladesh for giving him the opportunity to be a witness to history on 17th April 1971.

Tawfiq-e-Elahi, then a sub-divisional officer of erstwhile Meherpur sub-division, indeed witnessed the historic occasion, a significant day in the history of the country; the oath-taking ceremony of the Mujibnagar Government, which performed all of the wartime tasks and led the Bangladesh in the War of Liberation and achieved victory. He recalled the inauguration ceremony in his book titled “Chariot of Life: Liberation War, Politics and Sojourn in Jail”. The crowd burst into cheers and applause, raising full-throated slogans of “Joy Bangla,” he wrote.

Just seven days before the oath-taking ceremony, the Mujibnagar government was formed with the aim of efficiently directing the Liberation War; and the official announcement declaring the independence of Bangladesh was also issued in the event.

Forming a government in exile was no easy task as there were numerous challenges and hostilities to overcome. Barrister M Amirul Islam, then a young lawyer and politician who drafted the Proclamation of Independence, recalled the efforts to find an ideal place for the formal inauguration of the new government.

“The oath-taking ceremony was first planned to be held in Chuadanga. But the plan had to be changed because the Pakistanis had an air strike there,” Barrister Amirul Islam said in an interview with a daily. He said, “Then, we decided to hold the inauguration ceremony at a mangrove at Baidyanathtala in Meherpur on 17th April. We took BSF into confidence and asked for air cover, they agreed to do so and set up anti-air craft guns there.”

“At the place, the canopies of mango groves were like a natural camouflage. The place was easy to reach from the Indian side by a dirt road that connected the border post and any unlikely air raid would involve crossing Indian airspace, a risky choice for the Pakistani Air Force,” he added.

Amirul Islam also said that the oath-taking ceremony had to be done quickly and with utmost secrecy. “Therefore, no one except Tajuddin Ahmed and Golok Bihari Majumder, the then director general of BSF (Eastern Command), was informed about the plan,” he said.

Since the newly formed government’s initiation needed the attention of people across the world through international press, Amirul Islam and Abdul Mannan went to the Kolkata Press Club on 16th April to mobilise the media. “We thanked them for their support to circulate the news across the globe, and we expressed journalists that they will get a message from the Bangladesh government tomorrow.” They organised and hired a number of taxis and leaders, foreign journalists, and others were boarded in those taxis headed towards Baidyanathtala. Amirul said he reached Baidyanathtala with the journalists. Tawfiq-e-Elahi Chowdhury and Mahbub Uddin Ahmed, then sub-divisional officer of police at Jhenaidah, were already present there. People were not mobilised due to secrecy but still came in large numbers, he recalled.

Giving an almost similar description of the oath-taking ceremony in his book, Tawfiq wrote: “The VIPs mounted the podium and took their seats.” Thronged by scores of media people, following recitation from holy books, Professor Yusuf Ali, then chief whip of Awami League parliamentary party in the constituent assembly, began reading out the Proclamation of Independence. The Proclamation of Independence stated that the objective of the government was to ensure equality, human dignity and social justice for the people of Bangladesh.

Acting President Syed Nazrul Islam, with MAG Osmani, newly appointed commander-in-chief of Bangladesh Defence Forces, standing beside him, took the salute at a smart demonstration, which was followed by the assessment of the guard.

The national flag was hoisted and the group sang the national anthem, “Amar Sonar Bangla Ami Tomay Bhalobashi…” A scene from the pages of history was being played out in real life in a remote village, Tawfiq wrote in the book.

Syed Nazrul and Tajuddin spoke at the programme and went through a narration of Bangladesh’s democratic struggle spanning decades, which turned into the Liberation War in the face of the Pakistani regime waging armed aggression and genocide on the unarmed people of Bangladesh.

The Mujibnagar government led the Liberation War afterwards and mobilised global support for the oppressed nation. The nation was finally freed on 16th December in 1971.