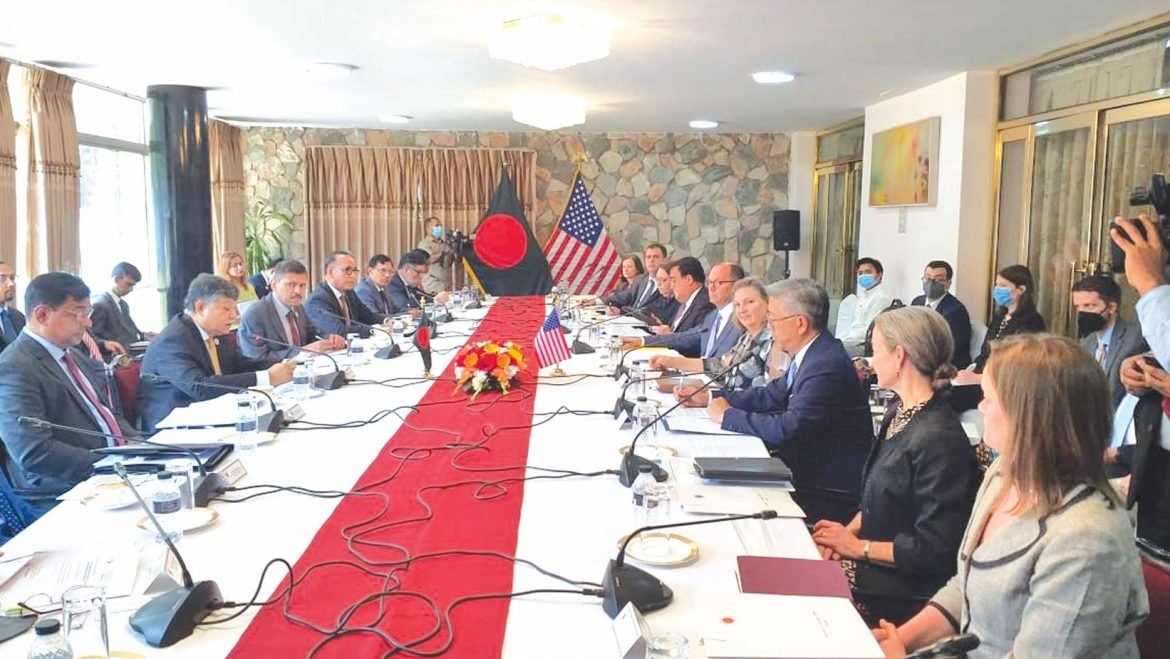 In the aftermath of the rocky event of US sanction against RAB officials, Bangladesh and the US joined their annual partnership talks in March. Both the countries held talks on a wide range of topics pertaining to bilateral and international economy, security, development, humanitarian aid and counterterrorism, writes Emran Hossain

Bangladesh and the United States of America hosted the 8th edition of the annual Partnership Dialogue in Dhaka on March 20, 2022, after a two-year hiatus due to the worldwide COVID-19 pandemic emergency. The visiting US group was led by US Under Secretary of State for Political Affairs Ambassador Victoria Nuland while the Bangladesh team was led by Foreign Secretary (Senior Secretary) Ambassador Masud Bin Momen. This was Dhaka’s first in-person political engagement with the Biden Administration, which was made even more noteworthy by the fact that it was the 50th anniversary of the two nations’ diplomatic ties. During the Dialogue both the sides reviewed the present state of bilateral relations between the United States and Bangladesh, including political, economic and security issues, as well as methods to strengthen the bond between the two friendly countries.

The two countries reiterated their commitment to a long-term collaboration, emphasizing tight cooperation in areas including security, development, humanitarian aid and counterterrorism. The two countries pledged to work closely together to create a common vision of an Indo-Pacific region that is free, open, inclusive, peaceful and safe. In this context, Foreign Secretary Masud emphasized the need to include an economic component in the IPS, to which the US side responded that an IPS Economic Framework will be presented shortly. Both sides also discussed key bilateral, regional and global topics of mutual interest and concern, including the present situation in Ukraine, Afghanistan, and Palestine.

For numerous years, signing agreements such as the General Security of Military Agreement (GSMA) and the Acquisition and Cross Services Agreement (ACSA) has been mooted as part of obtaining modern armaments from the United States. Bangladesh is also exploring two specialized defense deals with the US to acquire contemporary technology armaments, according to Nuland.

The subject of forcefully displaced Rohingyas being repatriated was also discussed. The Bangladeshi side expressed gratitude to the United States for its strong political and humanitarian assistance on the Rohingya problem, and emphasized Bangladesh’s aim of repatriating the displaced Rohingyan as soon as feasible. The recently signed MoU between Bangladesh and the UNHCR on Bhasan Char, according to Foreign Secretary Masud, could clear the door for US humanitarian aid in Bhasan Char. Under Secretary Nuland guaranteed the Rohingya problem that the US will continue to provide political and humanitarian assistance.

Both sides also discussed ways to expand commercial connections, including the US-Bangladesh Business Council’s forthcoming visit to Bangladesh in April 2022. Foreign Secretary Masud emphasized the need of diversifying US investment in Bangladesh, as well as the investment opportunities available in the country, such as special economic zones and high-tech parks. He also recommended that the US consider reinstating GSP facilities for Bangladesh RMG exports, as well as US support for WTO-sponsored trade facilitation initiatives for graduating LDCs. Bangladesh also requested US assistance in promoting the Blue Economy, as well as US assistance in restoring direct flights to New York.

Foreign Secretary Masud emphasized that the Bangladesh-US alliance is built on a common commitment to democratic government and human rights. Bangladesh reaffirmed its firm commitment to preserving the people’s civil and political rights. He underlined Bangladesh’s worry over recent sanctions imposed on the RAB by the US Departments of Treasury and State, emphasizing that this might jeopardize Bangladesh’s serious efforts to combat terrorism and transnational crime. He also highlighted Bangladesh’s desire to have an open and honest dialogue with the US about the sanctions with the goal of lifting them. The US side indicated that conversations on this matter would continue and praised the government’s commitment to participate. Other human rights and labor rights problems were also considered by the two sides. The deportation of Rashed Chowdhury, the convicted assassin known as the Father of the Nation, was also highlighted by the Bangladesh delegation.

On the other hand, The US was evasive in its reaction to the question of RAB sanctions. Following the discussion, US Under Secretary for Political Affairs Victoria Nuland noted that sanctions are a tough and challenging problem, but that progress has been achieved in the previous three months. She stated that the US is looking forward to working with Dhaka to resolve the sanction problem.

When the Russia-Ukraine war situation arose, Victoria Nuland also spoke on Bangladesh’s relationship with Ukraine. Bangladesh has a great relationship with Ukraine, she stated. Many Bangladeshi professionals and students work and study there. Bangladesh is fully aware that an invasion was conducted without provocation against a democratic and independent country. Instead of becoming involved in the battle, they are attempting to resolve the issue peacefully. As a result, all democratic countries must band together. She believes that everyone will speak out against war and for peace.

Bangladesh has great hopes for the Biden Administration in terms of developing a comprehensive engagement. Bangladesh will stay committed in this respect, with the goal of collaborating closely with the United States on our shared path to peace and development, according to the Foreign Ministry.

The dialogue took place in a nice and polite environment. At the discussion, the two countries reiterated their commitment to a long-term collaboration, emphasizing strong cooperation in security, development, humanitarian aid, and counter-terrorism. Both sides reaffirmed their commitment to continue strengthening the bilateral collaboration and taking the relationship to new heights. Next year, the US-Bangladesh Partnership Dialogue will hold its ninth edition in Washington, DC.