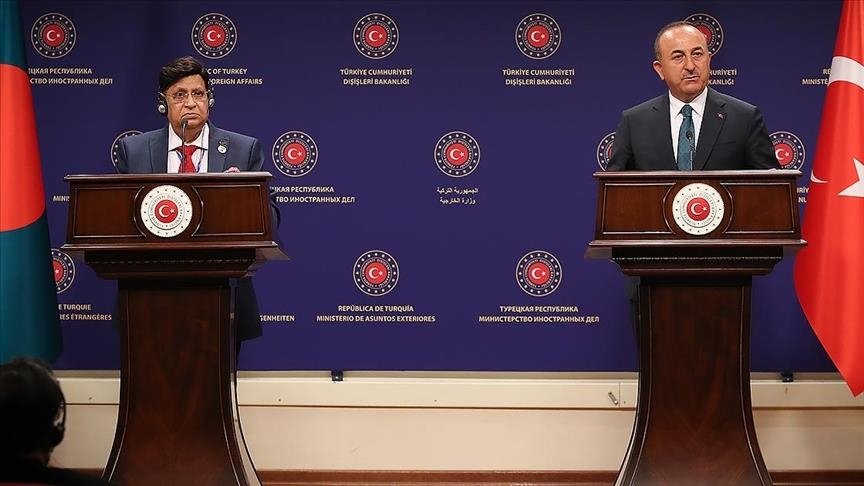 Turkey is determined to develop its partnership with Bangladesh further based on the two countries’ shared interests aimed at mutual well-being of citizens. Ensuing highest-level visits will certainly strengthen the bilateral ties between the brotherly nations more, writes Munaseeb Hossain

Turkey has turned out to be Bangladesh’s potential alternative source for purchasing military hardware and for defence training. The bond between Dhaka and Ankara has seen new momentum following the latest signing of a deal on military training, intelligence sharing, counterterrorism operations and fighting cybercrimes. The deal was inked on 8th January in Dhaka when Turkish Interior Minister Süleyman Soylu had a one-day visit at the invitation of his Bangladeshi counterpart Asaduzzaman Khan.

For defence cooperation, procurement and udgradation, Bangladesh has been traditionally dependent on some particular countries, including the United States and the United Kingdom for a long time. But the recent trend of growing relations between the two brotherly nations has resulted in multiple areas of cooperation ranging from Rohingya support to defence deal(s) and cultural exchange to trade ties.

Security cooperation
Being the fourth-largest weapon buyer from Turkey, Bangladesh imported $60 million worth of arms in the first four months of 2021 out of Turkey’s total of $1 billion in defence sales. The country allocated $4.45 billion to its military budget in the fiscal year 2021-22 with the sheer size of this budget indicating the market size and demands for weapons meant for the Bangladesh Armed Forces.
Roketsan, a major Turkish weapon manufacturer and defense contractor, delivered the first batch of the TRG-300 Kaplan missile system with a range of 300 kilometers (186 miles) to Bangladesh in June last year, according to a report published by Defense Technology of Bangladesh (DTB), a popular social media page on Bangladesh’s defense.
Bangladesh Ordnance Factories (BOF), the defence hardware manufacturer for the Bangladesh Armed Forces, has taken up a project to manufacture air defence and anti-tank missiles for the first time to strengthen its capacity and meet Forces Goal 2030, according to the Bangladesh Defence Analyst website, which is owned and published by Defseca, the country’s largest military, security and intelligence portal.
Apart from supplying weapons to Bangladesh, Turkey also provides training to different branches of Bangladesh’s security forces. The new deal will also follow the same path and will create opportunities for more training and ultimately lead to better understanding, coordination, and cooperation between these two countries. Under the latest deal, Turkey will provide the Bangladesh Police, the Border Guard Bangladesh, the Bangladesh Coast Guard, the paramilitary auxiliary force Ansar and VDP all sorts of support in times of need.
Although, historically, Bangladesh has bought military equipment from Russia, China, the United States, the United Kingdom and North Korea, Dhaka has determined that military equipment imported from Turkey would help Bangladesh to diversify its sources. In a similar vein, Turkey considers Bangladesh to be a critical market for the Turkish defence industry in the future and has strengthened its defence links with Dhaka in recent years.
In 2013, Turkey supplied Otokar Cobra light armoured vehicles to the Bangladeshi Army. In 2015, Turkey offered Bangladesh guided missile frigates in a major government-to-government deal. The Turkish firm Delta Defence was awarded a $1 billion contract for 680 light armoured vehicles in August 2017. Earlier, Roketsan of Turkey secured a contract in March 2019 to supply a regiment of medium range guided multiple rocket launchers to the Bangladeshi Army. In 2020, Bangladesh Air Chief visited Ankara.
In April 2021, Admiral M. Shaheen Iqbal, the Bangladesh Navy’s Chief of Naval Staff, led a delegation to Turkey and visited ASFAT, the state-owned military contractor site that contains 27 ordnance factories and three public naval shipyards. A 41-member team of the Bangladesh Armed Forces participated in a training exercise in Turkey on the Tiger MLRS (c) delivered by Ankara and returned in the first week of June in 2021. On 16th June 2021, Bangladesh Navy awarded the country’s state-owned defence contractor Khulna Shipyard a contract to build three diving support boats for its operational needs based on a modern Turkish design, according to Defseca.
Bangladesh Army Chief Gen SM Shafiuddin Ahmed also went on an eight-day visit to Turkey from August 18-26, 2021, when he met top Turkish military officials, including defence minister and head of Turkey’s Defence Industries Presidency and discussed issues of possible defence cooperation, training, and exchanges. He also inspected the operation control room of the Turkish Unmanned Aerial System (UAS), Army Aviation Headquarters, and the Turkish Aerospace Industries.

Economic relation
Bangladesh and Turkey have signed a joint protocol on trade and investment in 2012. The Bangladesh-Turkey Joint Economic Commission has been holding biennial meetings to discuss the ways for increasing bilateral trade and investment.
Bangladeshi export items to Turkey have been dominated by apparel products. Bangladesh and Turkey have been in talks to sign a free trade agreement (FTA) since the year 2012, but signing of the deal is halted due to the complications relating to Turkey’s bid for accession to the European Union. The shipbuilding industry of Bangladesh has also been identified as a potential sector for Turkish investment.
In the recent past, Bangladesh and Turkey have seen significant upturns in their investment cooperation. Recently two Turkish companies, Arçelik in home appliances and Aygaz in the LPG sector, have firmed up their investments in Bangladesh. Bangladesh is ready to offer an exclusive economic zone (EEZ), dedicated only for Turkish investments.
In the recent deal, both the countries agreed to tackle drug trafficking both inside and outside their borders. Now the two countries may work to stop the trade in illicit drugs, including their cultivation, distribution, and sale in both countries.

Rohingya and other issues
During the Rohingya crisis, Turkey donated millions of dollars to the government of Bangladesh in order to aid the stranded Myanmar Muslims here. In September 2017, First Lady Emine Erdogan visited and helped provide relief in the shelters of the Rohingyas and promised more co-operation and aid to Bangladesh.
In 2016, the diplomatic relationship between two countries became complex when Bangladesh denounced Turkey’s consecutive requests to free several Bangladeshi Jamaat-e-Islami leaders who have been convicted for war crimes during Bangladesh Liberation War by the International Crimes Tribunal in Bangladesh and eventually executed. However, after Bangladesh’s condemnation of the coup d’état attempt to overthrow the Erdogan government, relations began to improve.

Highest-level visit
Despite the pandemic, top officials from the two nations continue to pay mutual visits to each other’s countries signalling the start of a new chapter in bilateral relations.
Turkey President Recep Tayyip Erdogan is due in Bangladesh this year, but a date has not been decided due to the latest travel concerns over the new omicron variant of coronavirus, informed Bangladesh Foreign Minister AK Abdul Momen.
Bangladesh Prime Minister Sheikh Hasina will also visit Turkey, he added.
Earlier, Turkish Foreign Minister Mevlut Cavusoglu visited Bangladesh in December 2020, while his Bangladeshi counterpart AK Abdul Momen toured Turkey twice in the last three months.

As for closing note, it’s obvious in view of the recent ground realities that Turkey is determined to develop its partnership with Bangladesh further based on their shared interests and for the mutual well-being of peoples of the two friendly Muslim-majority countries. Ensuing mutual visits at the highest level will certainly add value to the existing bilateral relations between these countries.
With the exception of the years 2012-2016, Turkey-Bangladesh ties have been cordial and cooperative while the recently-signed deal on security cooperation and counterterrorism demonstrates that the two countries are moving along the right trajectory toward building a strategic partnership. Now, these two newly emerging economies are seeking to develop more intensive cooperation with each other. It is now of paramount importance that Turkey and Bangladesh find ways to boost people-to-people contacts and invigorate foreign direct investment (FDI).