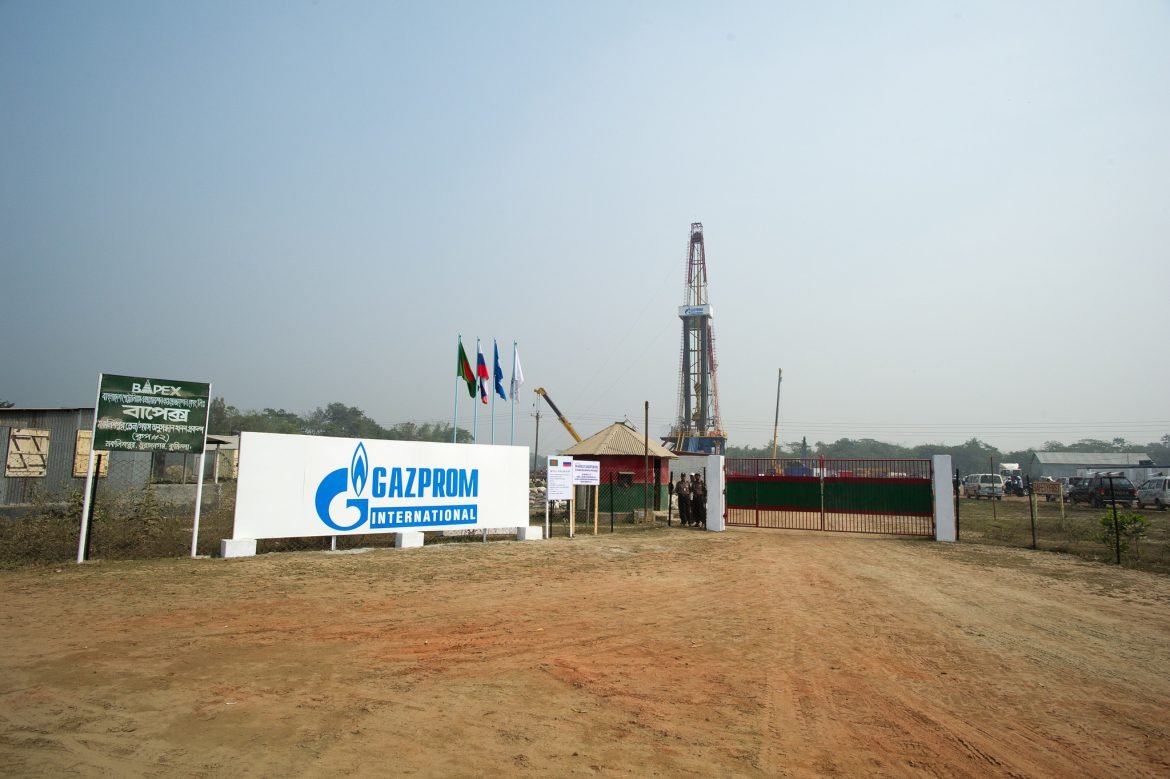 Bangladesh government awarded drilling contracts for 17 gas wells so far to the Russian PJSC Gazprom at a total expenditure of Tk 26 billion (Tk 2,600 crore) since 2012. But the Russian company used the services of Eriell to drill these wells. Gazprom does not give the contract directly to Eriell, but through Gazprom EP International, which is registered in the Netherlands. Gazprom International then hands over the work to Eriell, reports Press Xpress

Well drilling by Gazprom, the oil giant of Russian Federation, in Bangladesh has apparently raised some eyebrows as the company has made a bad track record with regard to its operational commitment. The company has drilled a total of 17 onshore wells in different parts across the country so far, but its drilling was found faulty in some wells, which were later developed by Bangladesh Petroleum Exploration and Production Company Ltd (BAPEX).
Earlier on January 28 in 2020, Gazprom signed two memorandums of understanding (MoUs) with state-run enterprises Petrobangla and BAPEX. Under the MoUs, both the Bangladeshi companies and Gazprom agreed to do some strategic programmes and drill three wells in the country.
Of late, Gazprom has started mobilising rigs and equipment to do the drilling of three onshore gas wells in the gas-rich Bhola island. It has already taken over the sites to primarily drill Tabgi-01 onshore well within months. The next two – Bhola North-02 and Illisha-01 – will be rigged in phases.
Even though Gazprom gets the contract, they don’t efforts or intention in place to do the work themselves. They plan to hire companies like Eriell Oilfield Services, which proposed to drill the same gas fields with 24 per cent less cost than Gazprom. If the state-run BAPEX is given the contract, the work could be done at even less than half the price.
Since 2012, Gazprom EP International has designed and built 17 appraisal, exploration and development wells at eight fields in Bangladesh. The total flow rate of these wells has reached 7 billion cubic meters of gas per year. Gazprom will receive Tk 1.80 billion (Tk 180 crore) per well, that means Tk 5.40 billion (Tk 540 crore) for the three wells. Yet in its letter to the government, Eriell has proposed to drill each well for Tk 1.36 billion (Tk 136 crore), totaling Tk 4.08 billion (Tk 408 crore) for all three wells.
BAPEX spends Tk 650 million (Tk 65 crore) to Tk 800 million (Tk 80 crore) on drilling per well. BAPEX completed drilling a well this month in Srikail, Muradnagar, at a cost of Tk 800 million, which means BAPEX could drill the three Bhola gas wells for Tk 2.40 billion only (Tk 240 crore).
In the process, the government by engaging BAPEX, instead of Gazprom, could save around Tk 3 billion (Tk 300 crore).
Since 2012, the Bangladesh government has awarded drilling contracts for 17 gas wells so far to the Russian PJSC Gazprom at a total expenditure of Tk 26 billion (Tk 2,600 crore). But the Russian company used the services of Eriell to drill these wells. Gazprom does not give the contract directly to Eriell, but through Gazprom EP International, which is registered in the Netherlands. Then Gazprom International hands the work over to Eriell.
BAPEX discovered Bhola gas field several years back where the three onshore wells are located. Gazprom was given the drilling job under the Speedy Supply of Power and Energy (Special Provision) (Amendment) Act-2010.
Energy experts term Gazprom’s drilling cost ‘exorbitant’, ‘unjustified’ and ‘unrealistic’ given the current context of the coronavirus pandemic when international oil companies do not have much exploration work in hand.
According to market insiders, rental fees of rig, an important equipment of hydrocarbon exploration, also fell drastically overseas as most of the rigs are idle globally due to inadequate exploratory jobs.
While visiting Russia in 2010, Prime Minister Sheikh Hasina had sought cooperation from Russian President Vladimir Putin for the exploration and development of Bangladesh’s oil and gas sector. A protocol agreement was signed at the time, where no specific Russian company was named. Russia later appointed Gazprom for the work.
On 8 August 2011, Gazprom submitted a proposal to Petrobangla for the drilling of 10 wells without tender. Under the Speedy Supply of Power and Energy (Special Provision) Act, Gazprom was awarded the contract for those 10 wells. They were later awarded contracts for 7 more wells.
According to a report sent to Petrobangla from BAPEX on 17 November 2016, just within a few days after gas extraction began from five of the 17 wells drilled by Gazprom, the extraction had to be halted as water and sand began to rise up. These are the Semutang 6, Begumganj 3, Shahbazpur 4, Titas 21 and Titas 20 gas wells. Gazprom had been paid around Tk 8.53 billion (Tk 853 crore) for drilling these five wells at the time. This whole sum of hard-earned public money was completely wasted.
BAPEX later drilled these five wells again and extracted gas. Gazprom was not held liable as the contract did not have any clause concerning accidents or such problems that could arise after the drilling. Conscious circle said Gazprom is yet again being awarded the contract with the same conditions.