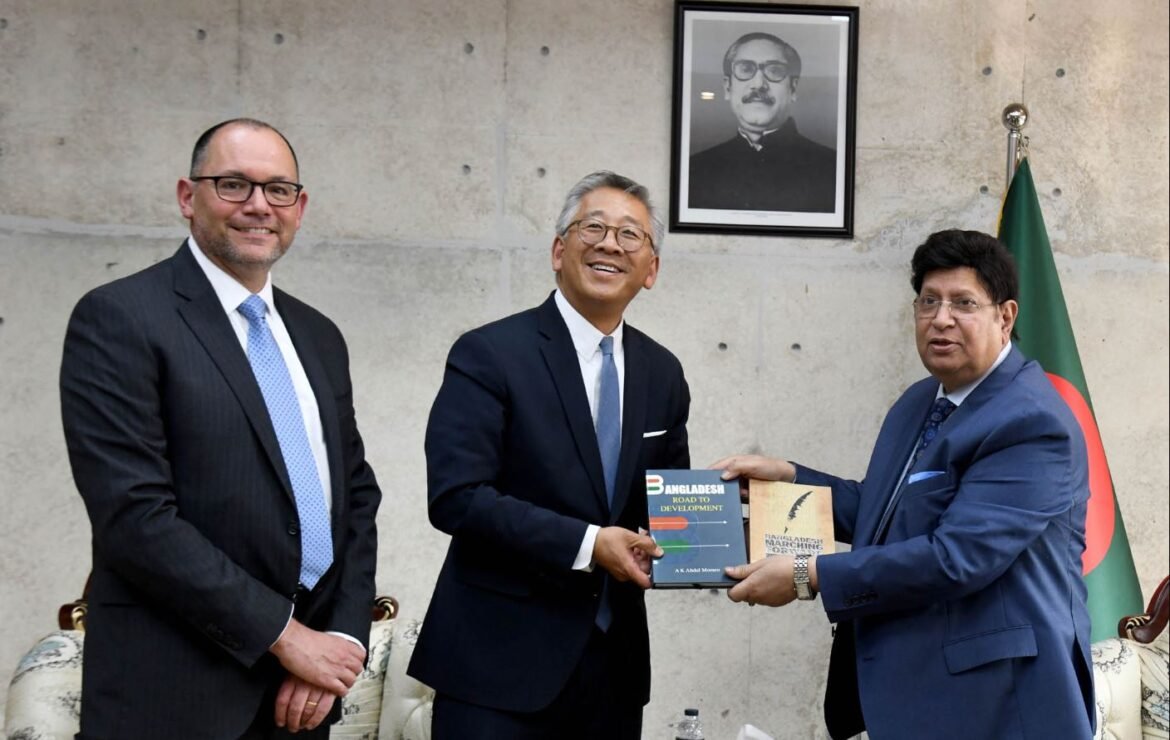 Donald Lu, the Assistant Secretary of State for South and Central Asian Affairs for the United States, visited Dhaka on January 14 and met with senior Bangladeshi officials and civil society representatives to discuss strengthening their bilateral relationship.

From January 12th to January 15th, Lu traveled to India and Bangladesh for consultations on a variety of issues, including energy, commerce, security cooperation, religious freedom, labor, and human rights.

On January 14, he arrived in Bangladesh from India in evening. Director General (Americas) of the Ministry of Foreign Affairs, Nayem Uddin Ahmed, welcomed Lu upon his arrival from India at Hazrat Shahjalal International Airport. After arriving in Dhaka, Lu went straight to the foreign minister’s home with US Ambassador to Bangladesh Peter Haas.

You can also read: Ambassador Muhammad Abdul Muhith selected VP of the UNDP/UNFPA/UNOPS Executive Board

His visit was expected to focus mainly on continuing concerns pertaining to domestic politics, human rights, the GSP program, defense agreements (namely GSOMIA and ACSA), withdrawal of sanctions on RAB, the Rohingya situation and its future, and investment in Bangladesh. Geopolitics about the Indo-Pacific were also likely to be discussed as the US is now giving it a high priority.

Lu was set to have formal talks with the foreign minister- AK Abdul Momen, the foreign secretary- Masud Bin Momen, the law minister- Anisul Huq, and the prime minister’s advisor on private industry and investment- Salman F. Rahman along with other officials.

Although a source wouldn’t say what they had talked about, they had detailed discussions on bilateral problems. No formal briefing on the dinner meeting was given to the journalists who had gathered in front of Momen’s house.

Earlier, Momen stated that Bangladesh would ask the US to review and lift the sanctions placed on the Rapid Action Battalion (RAB) in light of the force’s beneficial contributions to the nation. “RAB is much more mature now. We will have a request that they (US) should reconsider the decision,” he previously mentioned in another meeting.

“We will raise our issues. They will raise their issues. But others don’t need to teach us democracy. Democracy, human rights and justice are rooted in each of our hearts,” the minister had added.

What happened at Lu’s Sunday meetings

The senior US official visited Bangladesh to explore ways to deepen the bilateral relationship, increase economic collaboration, and talk about labor and human rights issues. Lu had separate meetings with the government officials and

Bilateral meeting with Masud Bin Momen: During the Sunday bilateral meeting of Lu and Foreign Secretary Masud Bin Momen, they have discussed a number of critical issues, including energy, trade, security cooperation, religious freedom, labor rights, and human rights, as well as the Indo-Pacific strategy and the lifting of RAB’s sanctions.

Donald Lu has stated that the Rapid Action Battalion (RAB) has made “tremendous progress” in upholding human rights while fulfilling its tasks.

However, he made no particular remarks regarding the lifting of sanctions against RAB. The RAB and seven of its former and present officials were banned by the US State Department on December 10, 2021, for violating human rights.

“We recognise this. This is amazing work. It shows that RAB is able to carry out its counterterrorism efforts and important functions while respecting human rights,” Lu remarked during a press briefing at the foreign ministry on Sunday.

The talk of fair and democratic election

At least four ministers, the prime minister’s private industry and investment adviser, and members of civil society were among the people Lu met with on Sunday to discuss a number of issues. It included the elections in Bangladesh, the BNP’s rally on December 10, freedom of expression, labor rights, the return of the Generalized System of Preferences (GSP) plus benefits, and the Indo-Pacific strategy.  Foreign Minister AK Abdul Momen and other high-ranking representatives of Bangladesh restated their support for free and fair elections.

Momen and the US official held a joint press conference on Sunday after talking. Momen stated, “They (Donald Lu) said many people complain about the elections.” “We said that complaints are also made in your country. 77% of Republicans say you had a rigged election last time. There are some such people in our country as well. Some people will say these things. Our hope is that we will have transparent, fair, and acceptable elections,” he further added.

When asked if the US had provided any election advice, Momen responded, “As previously stated, no country is perfect. Even your country (United States) is not perfect. But we are trying.” “We said that our party has always come to power through ballots, not bullets,” he stated. The foreign minister remarked, “We will certainly accept good suggestions. We have also shown proof of them. If we have any weaknesses, we will definitely take care of them.”

The acknowledgments by both countries over “excellent” bilateral relations

In the meetings, the officials from Bangladesh and U. S. have acknowledged the existing trajectory of “excellent” bilateral relations and desired to explore new paths and strategies to expand their economic cooperation and commerce. They also discussed the problem of Myanmar nationals who have been forcibly displaced, including their repatriation and resettlement.

According to the Ministry of Foreign Affairs, Lu was extremely grateful for Bangladesh’s compassionate action toward more than a million Rohingyas.

Donald Lu has appreciated Bangladesh’s remarkable socio-economic progress since independence, and the US government has pledged its unwavering support and collaboration for Bangladesh’s future endeavors. Additionally, he praised Bangladesh for successfully immunizing the “entire targeted population.”

Both parties agreed to preserve this connection in order to expand cooperation in other sectors and maintain a mutually beneficial partnership.

Rear Admiral Md Khurshed Alam, Secretary (West) Shabbir Ahmad Chowdhury, Ambassador of Bangladesh to the United States Muhammad Imran, and other director generals and officials of the Ministry of Foreign Affairs were present from the Bangladeshi side at several meetings.

What does this visit mean for Bangladesh and the U.S.

Lu’s visit might also be considered as a continuation of the two nations’ growing diplomatic ties over the previous two years. There have been 18 mid- and high-level bilateral visits to date, including the most recent one with Eileen Laubacher. In the 18 visits, Bangladesh has sent seven delegations to the US, while the US has sent 11 to Bangladesh.

This is Lu’s eleventh visit in the past two years. Expanding relationships and recently resolved disputes are the drivers of these increased number of visits. This growing relationship is partly motivated by the Indo-Pacific strategy and Bangladesh’s geostrategic importance.

From an economic to a cultural perspective, bilateral connections between Bangladesh and US are blooming. Existing bilateral trade has increased throughout the years and reached 13 billion USD in 2022. With USD 1.9 billion, the US is the largest donor to the Rohingya and Bangladesh’s third-largest trading partner. Additionally, it has sent over 100 million vaccine doses to Bangladesh as humanitarian assistance, which makes up 70% of its overall vaccine donations to the world.