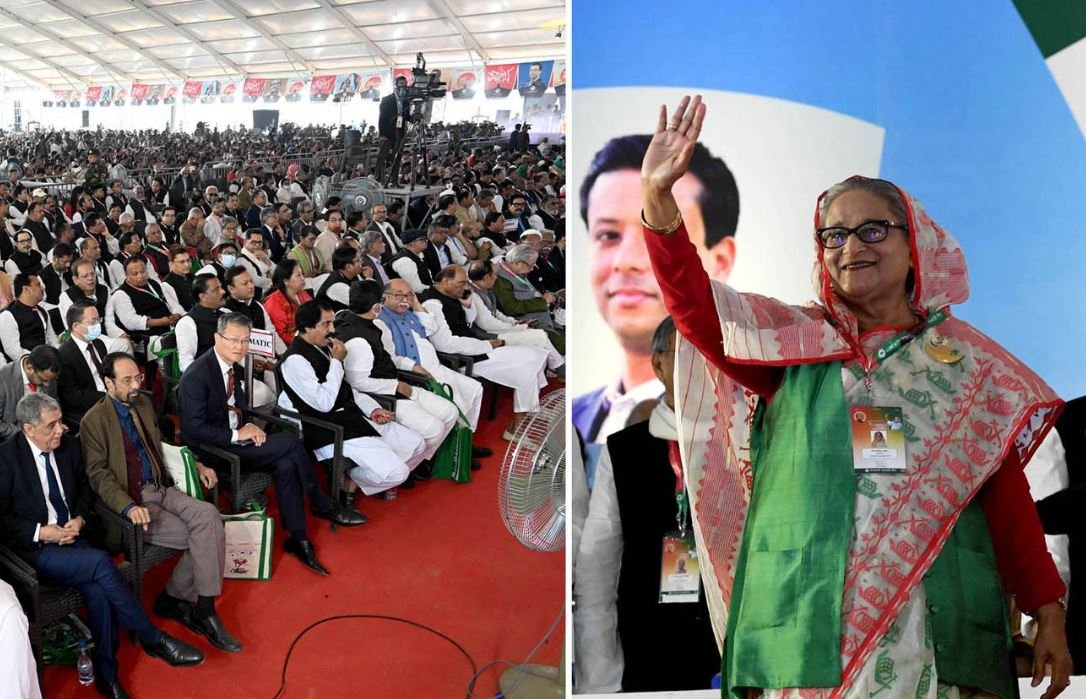 The 81-member Central Executive Committee was unveiled at the 22nd national council of the ruling Awami League along with the vow to establish a smart Bangladesh by 2041.

Sheikh Hasina, the prime minister of Bangladesh and president of the Awami League, inaugurated the 22nd national council at 10.30 am in Suhrawardy Udyan. The main focus of the triennial council was “Unnoyon Abhijatrai Deshratna Sheikh Hasinar Netritte Bangabandhur Swapner Unnoto, Samridho O Smart Bangladesh Gorar Protoye.” Approximately 7,000 councilors, delegates, and hundreds of officials and activists from the ruling party gathered to the spot. The 81-person Central Executive committee was revealed in the second session of the conference.

According to the Awami League’s constitution, the presidium committee is made up of 19 positions in total, including the president and general secretary.

Prime Minister Sheikh Hasina was named the party’s president by the election commission, and Obaidul Quader was re-elected as general secretary.

Since 1981, Sheikh Hasina has been serving as party leader. Obaidul Quader took office in 2016 and achieved a landmark by winning re-election to lead the party under a tumultuous political and economic environment.

After being re-elected as the party’s president for the tenth time on Saturday, Sheikh Hasina introduced the new Awami League Central Working Committee (ALCWC) on Saturday without making any significant modifications.

Three members of the ALCWC’s presidium, Nurul Islam Nahid, Abdul Mannan Khan, and Ramesh Chandra Sen, were dropped out. They had all served as ministers before.

Among the 34 secretaries of the ALCWC, the Organizing Secretary Shakhawat Hossain Shafiq and the Youth and Sports Secretary Harunur Rashid have been removed, and no one has been assigned to their respective positions.

The positions of Secretary of Labor and Manpower, Deputy Secretary of Publicity and Publications, and Secretary of Youth and Sports have been left vacant. The executive candidates will be nominated at the party’s presidium meeting.

No major change in posts

There are no changes to the positions of joint general secretary, however there is one change to the positions of organizing secretary. Saturday’s council did not declare any of the 28 ALCWC executive member posts. Sheikh Hasina stated that executive positions would be filled following the party presidium meeting. The Awami League Central Committee has a total of 81 positions.

Why no alternative to Sheikh Hasina for president?

Syed Anwar Hussain, a historian and think tank, emphasized that the Awami League has no alternative but to designate Sheikh Hasina as its president because she has proven herself competent of the role via a number of accomplishments. He stated that Sheikh Hasina was elected president of the Awami League in 1981 while she was abroad. “Since then, many attempts have been made to break up the party but her strong leadership took the Awami League to a new height. The party is currently regarded as one of the most prominent political parties on the subcontinent,” he added.

HPM Sheikh Hasina has also set an example by being the first person in the history of the subcontinent to form three governments in a row.

However, Sheikh Hasina stated that it is difficult to lead both the government and the party. “I am cordially accepting the responsibility that you have given to me. However, I believe that new leadership must emerge. I hope that you will bring new leadership in the future,” she added.

Khandaker Mosharraf Hossain, a lawmaker from the Faridpur-3 constituency, has been removed from the 22nd advisory council of Awami League.

He also serves as president of the parliament’s standing committee on local government, rural development, and the cooperative ministry, but he has been absent from the chamber for a considerable amount of time. Currently, he is not in the country.

Khandaker Mosharraf held the positions of minister of expatriate welfare and minister of local government before being removed from office in 2018. There are allegations that he and other members of his family exercised excessive influence and participated in wrongdoing.

According to the party’s constitution, the Awami League has a 51-member advisory council, which the president may expand if necessary. Khandaker Mosharraf has served as a council advisor in the previous councils.

He is the only member of the council to be removed. Five Awami League leaders who previously served in the presidium and other prominent positions have been appointed to the advisory committee. However, a large number of senior party officials passed away during the Covid-19 pandemic, leaving many positions in the council vacant.

Why no major change in the committee?

As there has been no big change in the committee, it has led to few questions. Zayadul Ahsan Pintu, Journalist, editor of DBC news, thinks that it is very natural and legitimate that 11 months prior to election, AL won’t be changing the members. “This actions comes from the willingness to maintain stability inside the party while there are opposition movements going on. With new members, there are risks of nomination syndicates or exploiting powers. Moreover, it is not necessary that changing members in council would make the party strong,” he added.

Senior journalist Nazrul Kabir believes, “this time’s council was different as Sheikh Hasina described her agenda, challenged the national issues in front of delegates with confidence and honesty.” He stated, “HPM Hasina is leading the party for last 41 years. She has been maintaining the oldest party of Bangladesh with all her strength, wisdom and efforts”.

According to Think-Tanks, with historical context, the decision of not changing the committee has very wise choice for Awami League and the trust and coordination the party holds, it best fitted for the upcoming election.

Leaders and activists from the grassroots level of the Awami League attending the national council pledged to cooperate with the new leadership and serve party to win the next national election. Additionally, they pledged to assist the administration in implementing this year’s council topic, “Smart Bangladesh,” into action. They said that they couldn’t think of anyone else for the top job in Awami League besides Sheikh Hasina.

Obaidul Quader presented the organization report during the inaugural session of the council. He stated that the leaders and activists of the Awami League are prepared to confront terrorism, arson, and the anti-government movement.