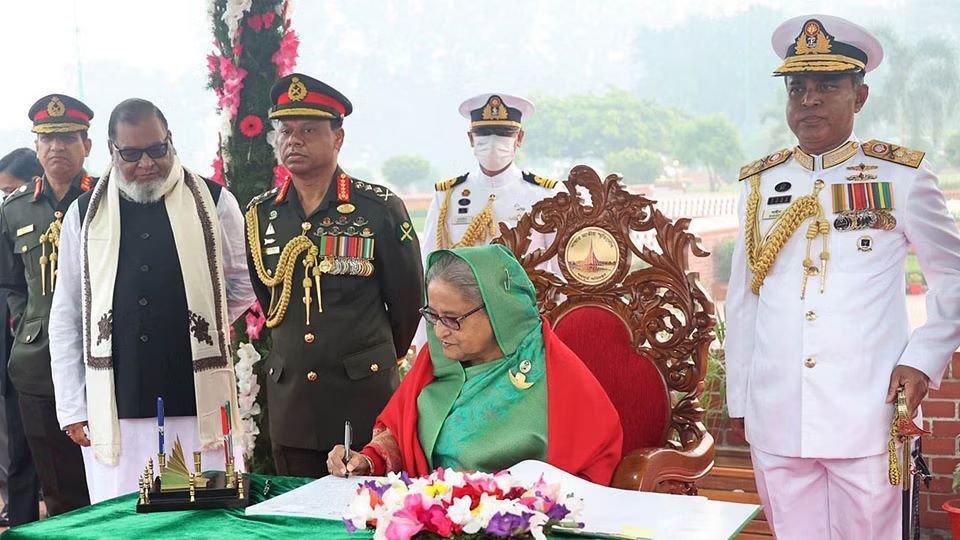 Prime minister Sheikh Hasina has written a heartfelt message on her visit to the National Martyr’s Memorial at Savar. The Prime minister placed a floral wreath at the memorial at the dawn of Bangladesh’s national victory day. She oversaw the traditional ceremony with a military parade. She then wrote her official remarks on the visitor’s book at the National Martyr’s Memorial

Prime Minister gave solemn tribute to all the martyrs of the war of independence and to Bangabandhu and her other family members. She commented on the target of Bangladesh Vision 2041 alligned with Bangabandhu’s golden Bangladesh.

Today marks 51 years of the independence battle of the People’s Republic of Bangladesh and the victory of the liberation war. I pay tribute to all the martyrs of this great liberation war. I reminisce Bangabandhu Sheikh Mujibur Rahman, the greatest Bengali father of the nation with the utmost respect. I remember my mother Begum Fazilatunnesa Mujib. I recall my two freedom fighter brothers, Sheikh Kamal and Sheikh Jamal; ten years old younger brother Russel. I also pray for the forgiveness of the martyred souls on May 14th of 1974.

I pay my respects to the lakhs of mothers and sisters of this nation who were tortured by the Pakistani assailants, the Al-Badr and traitors during the Great War of Liberation in 1971. No sacrifice of the war is wasted. Bangladesh today is moving ahead at an unstoppable pace by following the path of the ideals and non-communal spirit of the Great War of Independence. In 2021, Bangladesh has been promoted as a developing country.

By 2041, Bengali will build a nation which will be enriched in knowledge, science and technology, following the dream of the father of the nation, Bangabandhu Sheikh Mujib. The world will recognize Bangladesh with the notion of “Smart Bangladesh”.

May Allah help us.