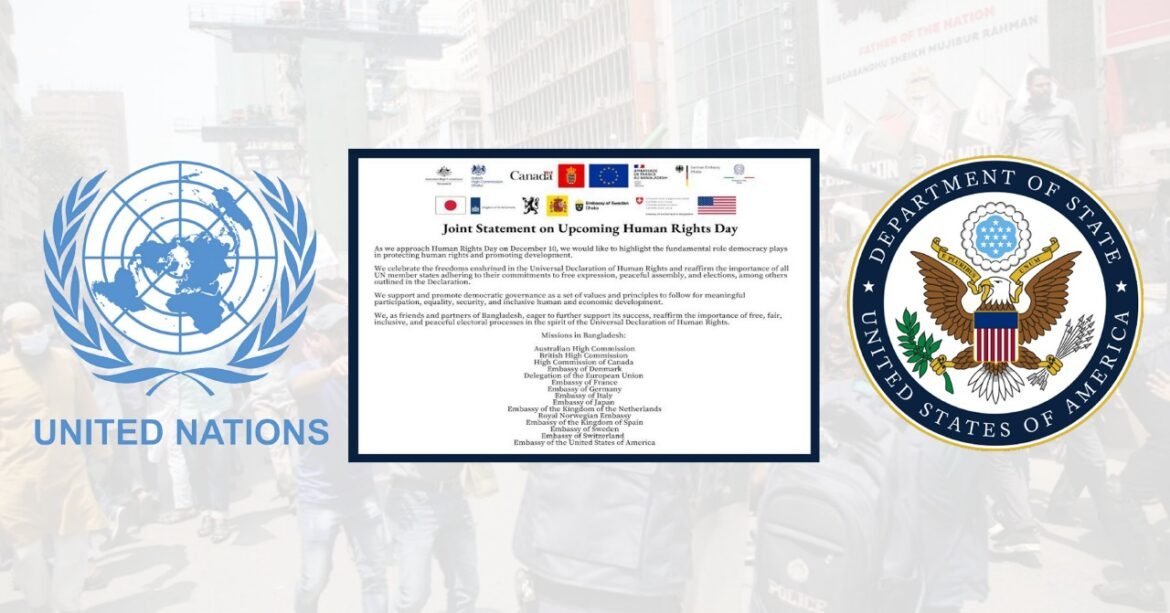 International stakeholders like the United Nations, United States of America and major foreign missions in Bangladesh have called for allowing free expression, freedom of the press and peaceful assembly ahead of the national elections, while also voicing concern over political violence here.

“As Bangladesh is coming closer to its national election next year, we remind Bangladesh of its commitments, as a UN member state, to free expression, media freedom and peaceful assembly among others written in the Declaration,” read the statement.

The UN Declaration says that “all human beings are born free and equal in dignity and rights”.

In the December 7 statement ahead of International Human Rights Day on December 10, a day when Bangladesh’s major opposition political party BNP announced a rally in Dhaka, she said, “Ours is a shared humanity rooted in universal values. A threat to the rights of one person is a threat to the whole of society.”

The UN, she added, in solidarity with all Bangladeshis recommits itself to upholding the core values of dignity, equality and liberty, including thought and conscience.

The UN statement comes barely a day after 15 major foreign missions in Bangladesh sent in an extraordinary joint statement ahead of the December 10 International Human Rights Day.

The signatories to the extraordinary joint statement are the missions of USA, Australia, the UK, Canada, Denmark, the EU, France, Germany, Italy, Japan, the Netherlands, Norway, Spain, Sweden, and Switzerland.

They emphasised on the fundamental role democracy plays in protecting human rights and promoting development here and reaffirmed the importance of free, fair, inclusive and peaceful electoral processes in the spirit of the UN Declaration of Human Rights.

Meanwhile, spokesman for the US state department Ned Price has expressed concern over the reports of intimidation, political violence, police harassment, arrests of opposition party members and restrictions on the ability of the opposition parties to meet and hold peaceful rallies.

“We call on the government to respect and to protect the fundamental freedoms of expression, association and peaceful assembly,” he told a Tuesday press briefing in Washington DC.

The State Department official went on to call on all parties in Bangladesh to respect the rule of law and to refrain from violence, harassment and intimidation.

According to him, genuine elections require the ability of all candidates to engage voters free from violence, harassment and intimidation.

He also said, “We encourage the government authorities to investigate these reports of violence thoroughly, transparently, and impartially, and to hold the perpetrators to account.”

TRAVEL ALERTS RAISE ALARM The US and the UK have issued a travel alert meant for Bangladesh ahead of the political demonstrations on December 10.

The American embassy in Dhaka viewed that the rallies intended to be peaceful can turn confrontational and escalate into violence.

Two of Bangladesh’s largest political parties have announced rallies in different areas of Dhaka for December 10, the statement said.

The alert read, “You should avoid demonstrations and exercise caution in the vicinity of any large gatherings. Review personal security plans; remain aware of your surroundings, including local events; and monitor local news stations for updates.”

It comes following a similar alert from the UK Foreign, Commonwealth & Development Office.

The UK issued a travel warning to Bangladesh amid fears of political violence. On December 10, there is a fear of conflict between law and order forces and political parties and shortage of vehicles in this warning.

This notification was published on December 6 in the Foreign Travel Alert of the British Government.