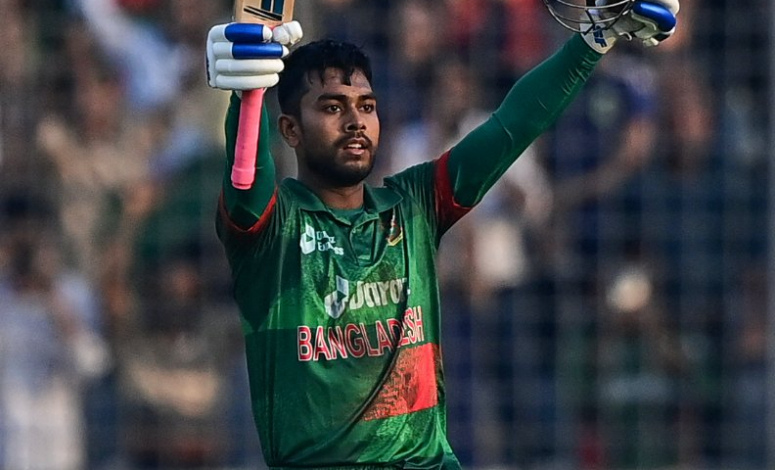 Bangladesh has secured their consecutive bilateral ODI home series victory against India courtesy of a magnificent century by Mehidy Hasan Miraz. The Tigers won the second match of the three-match series by 5 runs in a nail-biter of a game. Miraz scored his maiden century from 83 runs and was awarded the man of the match award.

Bangladesh won the toss and decided to bat first but got into a sticky situation by losing 6 wickets for just 69 runs. Mahmudullah Riyad and Miraz built a partnership of 148 runs from that stage. Miraz shifted gears with some intelligent hitting in the last five overs and completed his maiden century in the last ball of the innings. Mahmudullah scored a gritty 77 runs off 96 deliveries.

Indian captain Rohit Sharma did not come out to open the innings during the chase due to a thumb injury. Bangladeshi pacers, Ebadot Hossain and Mustafizur Rahman, quickly removed the opening pair of Virat Kohli and Shikhar Dhawan respectively. Bangladeshi bowlers kept chomping out the Indian lineup at regular intervals. Shreyas Iyer (82 off 102 balls) and Axar Patel (56 off 56 balls) built a 107-run partnership and dug out India when they were at 65/4 at one stage.

The Tiger bowlers once again took back the initiative by taking out Iyer, Patel, Shardul Thakur, and Deepak Chahar at quick succession. But the game had another dramatic turn of events when Rohit Sharma came to bat at number 9. The Hitman hit five sixes and 3 boundaries to take the game into the last ball. He was dropped twice by Anamul Haque and Ebadot Hossain during his stay.

Mustafizur Rahman kept his nerve to bowl a perfect yorker in the final delivery to restrict Rohit Sharma and India with 5 runs. Bangladesh with this win held the series. Litton Das became the second Bangladeshi Captain after Shakib Al Hasan to win a series in his captaincy debut.

Both teams will meet for the final ODI match of the series at Chattogram on Saturday. There will be a two-match Test series after that.