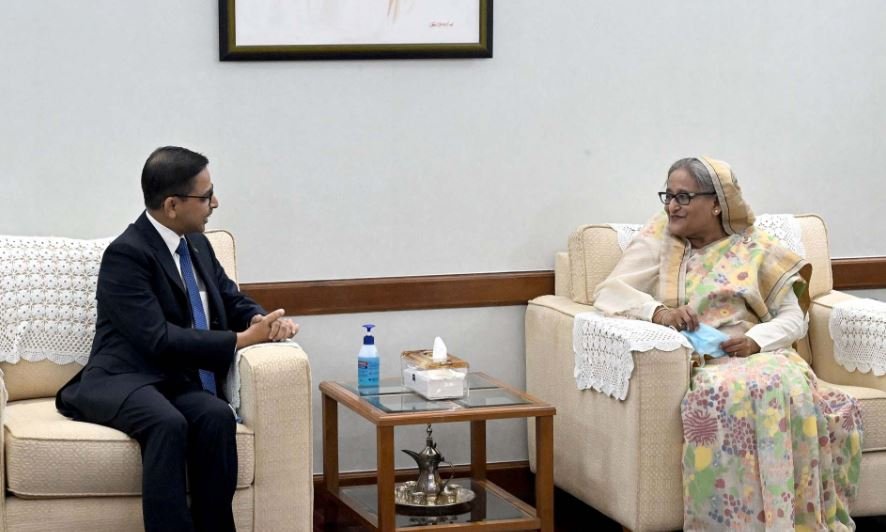 The newly appointed Indian high commissioner, Pranay Verma, stated Today that Bangladesh always gets the highest priority from his country.

“India has a policy for neighbouring countries. But in this regard, Bangladesh gets the highest priority. Bangladesh always gets priority in any case,” said the envoy. Today, during a courtesy meeting with Prime Minister Sheikh Hasina at her official residence Ganabhaban, Prannoy Verma remarked this. After the meeting, PM’s Deputy Press Secretary KM Shakhawat Moon stated in the briefing.

The Indian envoy described Bangladesh as “a very good friend” of India and stated that Bangladesh and India would cooperate to combat terrorism in this region.

Sheikh Hasina remarked that Bangladesh and India could solve all unresolved issues, including the distribution of Teesta river water, through negotiation. She also invited Indian investors to invest in Bangladesh’s 100 economic zones. According to Verma, trade and communication between Bangladesh and India have dramatically risen in recent years.

Sheikh Hasina and Verma reviewed the Comprehensive Business Partnership Agreement (CEPA) to facilitate economic links between the two neighboring nations during their meeting. Mr. Verma assured that India would aid Bangladesh in the energy and electricity sectors. He also commended Bangladesh’s socioeconomic progress under the wise guidance of Prime Minister Sheikh Hasina.

Sheikh Hasina referred to Bangabandhu Sheikh Mujibur Rahman’s lifetime commitment to the nation’s citizens. She stated that, in the footsteps of Bangabandhu, she is dedicating her life for the people of the country.

Md Ziauddin, ambassador at large, and Ahmad Kaikaus, principal secretary, were present at the meeting.