“No one can stop Bangladesh’s advancement,” PM at JL’s Grand Youth Rally 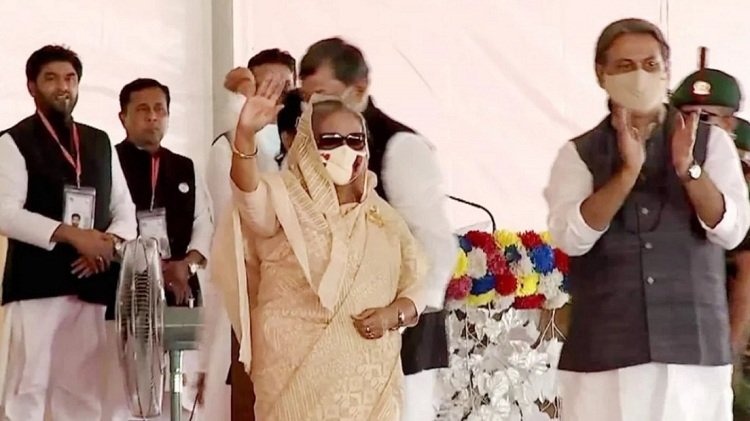 Prime Minister arrived around 2:45 pm to inaugurate the program by releasing pigeons and balloons. Jubo League Chairman Sheikh Fazle Shams Parash and General Secretary Mainul Hossain Khan Nikhil accompanied the PM. This was the PM’s first public rally attendance in person since the outbreak of Covid-19.

A cultural program entertained the waiting activists before PM’s arrival. Actor Chanchal Choudhury was the star of the show with his beautiful singing. Suhrawardy Udyan became a “sea of people” as hoped by JL Chairman Sheikh Fazle Shams Parash. The activists began to arrive in thousands of numbers at the venue since morning donning colorful t-shirts.

Prime Minister Sheikh Hasina gave an enthralling speech to boost up the activists. “Today is Jubo League’s 50th anniversary meaning the golden jubilee. I congratulate all members and leaders of JL on this occasion.”

“As the Ukraine war is bringing sanctions after sanctions, all the imported goods price has increased. I am asking all JL leaders to return to their villages, cultivate their own lands and start cultivating infertile lands.”, she added.

For BNP activists she said, “They don’t see any developments. Now if someone is blind while they have good sights what can be done? They don’t see any developments, but they are using them anyway. They are reaping all the benefits of Digital Bangladesh. What did BNP do when they were in power? They looted people’s wealth and did not do any development. We have empowered the youth, Khaleda Zia killed thousands of activists in the name of Operation Clean Heart. Did any BNP leader ever think there will be a Bangladeshi Satellite in the sky? Bangladesh Awami League made it possible after coming to power.”

In her speech, Sheikh Hasina outlined various development initiatives of the government. Highlighting the financial situation of the country, Sheikh Hasina said, “The reserve is being spent for the welfare of the countrymen. The country’s money stays in the country. Those who said that the country will be Sri Lanka have been proven false. No one will be able to stop Bangladesh’s progress even if they conspire from abroad. Bangladesh will move forward.”

She criticized BNP and said that BNP did not develop but only plundered while in power. “Awami League’s criticism does not fit in the face of those whose leaders have been sentenced for murder and money laundering”, she added.

She ordered JL leaders to stay away from drugs, corruption, and terrorism. She thanked JL activists for their help during the Covid-19 pandemic times.

From “breeding ground of terrorism” to “next Asian tiger”

Parash said, “In 2008, HPM Sheikh Hasina took the state responsibility with a single majority mandate. At that time, many thought that the economy would be destroyed. But the Prime Minister did not let the boat sink after taking charge.”

Addressing BNP General Secretary Fakhrul Islam Alamgir, he said, Fakhrul Islam went to Barisal and spoke a lot. But he did not go through the Padma Bridge in Barisal. He went by plane. I want to tell BNP leaders, don’t be shy to cross Padma Bridge. Shame on how many developments you will ignore.”

He said that the current economy is going through a global recession. He said, “Spending has also increased in Europe and America. This suffering of our country is not long term. We agree, the people of Bangladesh are suffering now a bit. Prime Minister has freed from Covid crisis. She can also free us from the global recession.”

Historically, rallies have played an impactful role in our national politics. With the 12th National Parliamentary scheduled for early 2024, the root-level political events are creating buzz around the country.

The biggest opposition party, Bangladesh Nationalist Party, has been successfully hosting rallies in the divisional cities amassing large crowds. The rallies seem to have worked as a tonic for BNP’s root-level activists after they went missing from field politics in the last few years. The saber-rattling of the BNP’s top leadership to hold the field has heated the real and virtual worlds alike.

The Grand Youth Rally by BJL can be viewed as the counter from the ruling party. Bangladesh Awami League is the ruling party since 2009. BNP’s decision to not participate in consecutive parliamentary elections in 2014 and 2018 turned catastrophic for its field activism. It can be said that with no real opposition party on the field Awami League’s field activity turned a bit stale also.

The Grand Youth Rally by BJL is the start of a counter to BNP’s recent rallies while also celebrating the organization’s rich history. The large gathering will be a show of strength and popularity from the ruling party.

Bangladesh Awami Jubo League, famously known as Jubo League, is the first youth organisation of Bangladesh founded by Sheikh Fazlul Haque Mani under the direction of Father of the Nation Bangabandhu Sheikh Mujibur Rahman through a youth convention at the Institution of Engineers on November 11, 1972.