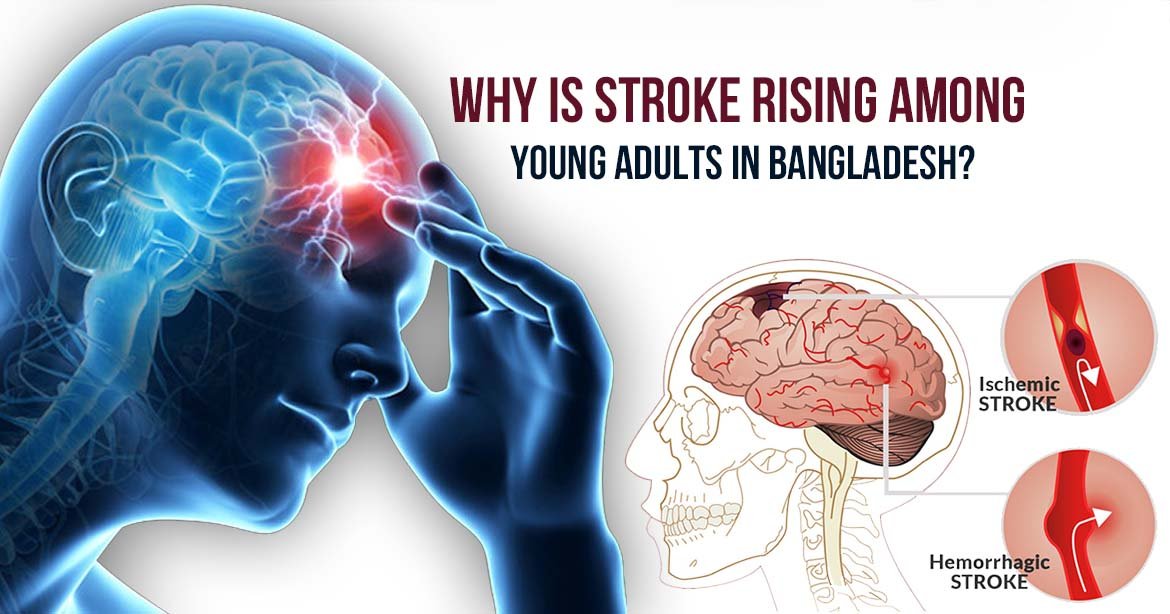 In Bangladesh, stroke ranks second among non-communicable diseases in terms of both long-term disability and death causes. As it affects people of all ages, young adults are also affected by this deadly ailment. In fact, the risk of stroke has considerably increased among the young generation. Furthermore, rising stroke cases among Covid-19 patients have been reported in recent times. Indeed, stroke is the most widespread non-communicable disease both globally and in Southeast Asia.

Stroke, sometimes called a ‘brain attack,’ takes place when something blocks blood flow to part of the brain or when a blood vessel in the brain bursts. It can either be ischemic or hemorrhagic. The largest rise is being observed in ischemic strokes, which are caused by blood clots that enter the brain and clog arteries. It is the most prevalent kind of stroke. A rather less frequently occurring type is hemorrhagic stroke, which occurs when a blood artery in or near the brain bursts.

Stroke cases in Bangladesh increased four times in the last 10 years with 11.39 stroke cases reported per 1,000 persons in 2021. The World Health Organization (WHO) reported 1,18,918 stroke-related deaths in Bangladesh in 2018 alone, which accounted for 15.31% of all deaths and placed the nation 41st worldwide in terms of age-adjusted death rates. The Bangladesh Bureau of Statistics (BBS) reported 85,360 stroke-related deaths in 2020, which remained nearly twice as many as the 45,502 deaths the disease caused in 2019.

The Dhaka Medical College Hospital (DMCH) conducted a stroke awareness campaign in 2021. The information garnered from there reveals that the DMCH treats 50 stroke patients every day – thereby making it the center of stroke care. At any given time, the hospital is home to about 600 stroke patients. About 20% of the surgeries done at the DMCH each year are related to stroke.

Most of the young people don’t think that they could ever have a stroke. In fact, there is no such factor as being too young to have one. Although the risk of stroke increases with age, young adults, infants, children, and adolescents can nevertheless get faced with stroke. In fact, a study published in Journal Stroke found that between 10 and 15 percent of strokes occur in adults between the ages of 18 and 50. Most experts agree that under 45 is a young age to suffer a stroke. Younger patients often experience various types of strokes than older patients do.

Younger adults seem to be suffering more from stroke with previous Covid-19 cases. While the specific link is still unclear, it appears to be related to the virus that is spreading inflammation throughout the body. This includes the walls of blood vessels, which can get inflamed and cause blood cells to stick together and form clots.

What causes stroke in younger people?

The risk of stroke is 50% higher when high blood pressure in human body stays uncontrolled. Junk food, contaminated item, and high carbohydrate intake can trigger the disease. Younger persons are more likely to have certain risk factors for stroke than older adults – especially because of smoking, excessive alcohol use, obesity, diabetes, hypertension, cardiac disease, increased blood pressure, and high cholesterol. However, unhealthy lifestyle choices are not the only factor in young people’s stroke proneness. Strokes can occur before the age of 45, too, for a variety of reasons including those that are inherited.

Unexpected numbness or weakness on one side of the body, face, arm, or leg

An unexpected problem with one or both eyes’ vision

An unusual inability to walk, dizziness, losing one’s balance or showing poor coordination Severe headache without a cause

“Stroke is globally the leading cause of disability affecting families economically, particularly in countries like Bangladesh,” said Prof Dr Raziul Haque, Department of Neurosurgery, DMCH. The number of strokes in Bangladesh can be reduced by a lot if all hospitals have basic stroke treatment facilities. This is because strokes can be cured if they are treated within four hours of the first symptoms.

Neurologists advised people to visit hospitals right away if they experience any symptoms of a stroke. Mohammad Sumon Rana, Assistant Professor, Department of Neurology at DMCH, said, “Every minute after stroke counts for it means damage of 2 million neurons.” There are 2,213 hospitals and 45,723 registered physicians in the country, but only 160 of them are neurologists. There are only five private hospitals and two government-run hospitals in Dhaka offering stroke care to patients. If the blood clots are mechanically removed within eight hours of the outset of the deadly disease, stroke patients can get benefitted. Anti-blood clotting medication can be used to treat the condition in its early stages. Stenting can also be used to treat strokes.

Research shows that obesity is a major contributor to the cause of rising stroke cases among adults aged below 45. The prevalence of obesity among kids and teenagers nowadays raises the lifetime risk of stroke. The risks of diabetes, high cholesterol, and hypertension all get increased by obesity. All of these are significant stroke risk factors for any age-group people.

Consuming healthy, fresh, and non-processed foods and refraining from consuming sugary beverages have been related to a reduced risk of stroke/cardiovascular disease. But according to American research, decreasing salt intake is the most significant dietary modification to consider. It states, “If one is predisposed to high blood pressure and consumes a lot of salt, he/she will have a difficult time controlling high blood pressure, which is the leading cause of stroke. Fast food and prepared foods are notoriously rich in sodium and are best to avoid.”

Even if one decides not to completely give up smoking, a reduction in one’s cigarette intake can help reduce the risk of stroke in young adults. According to Journal Stroke published in 2018, the more cigarettes individuals under the age of 50 smoked, the more likely they were to suffer an ischemic stroke. The study suggested that quitting smoking should be the goal, but even cutting back can help people under 50 to have fewer strokes.

With the overall recommendations put forth, regular health checks for diabetes and high blood pressure would be incredibly useful for younger people. Regardless of age, awareness of the dangers and knowing the symptoms of any stroke is one of the most effective approaches to prevention or recovery.

The rate of stroke is gradually increasing in Bangladesh. Deaths from stroke are also abnormally on the rise among the youths.

In an exclusive interview with Press Xpress, Professor DR MD SHAFIQUL ISLAM, Neurology Department, Bangabandhu Sheikh Mujib Medical University, discussed about the growing concern and the possible way out of this predicament.

Why are stroke cases rising alarmingly in Bangladesh?

Not only in Bangladesh, but stroke is one of the leading causes of death in almost every countries around the world. According to the statistics of last 10-20 years, the stroke rate is rising in developing countries. On contrary, developed countries are reducing the incidence of stroke. Because they have been preparing for a long time. People of those countries are more aware and take good care of their health, hence stroke rates are lower in those countries.

A recent report brings to the fore that stroke is rising among the youths. How do you evaluate this?

It’s true that stroke is increasing among the young generation in our country. If you look at the developed countries, you will see that the youth there are health conscious. They eat healthy food and do physical exercise regularly. On the other hand, youths in our country are leaning towards fast food, and not doing enough physical activity. If we don’t do physical activities, and regularly eat fast food, then our body joints will not move properly, body fat will accumulate, and blood fat will increase – leading to stroke.

Do you think, raising stroke awareness can help check stroke? What should be done?

There is a lack of proper identification, and detection of stroke in Bangladesh. We need to modernise the stroke identification process. Most importantly, awareness has to be created among all. There are only a handful of neuroscience doctors here. Hence, it is impossible for us alone to create mass awareness. If neurologists, rehab specialists, and general physicians learn and understand stroke as a social practice, and simply explain it to the people, then we will be able to make enough population aware just within a year.

Patients should feel comfortable communicating with neurologists. What would you suggest for patients to open up about their condition?

Stroke is a brain disease caused by a blocked or ruptured blood vessel. Since it is a blood vessel-related disease, it can affect the brain. The risk of stroke also increases with age, but if you are aware, 80% of strokes are preventable. If you consider the risk factors of stroke such as; diabetes, pressure, and smoking, and if you know and find solutions to them, there will be no more risk of stroke.

Is there any other conditions that make further stroke more likely? What can a stroke patient, young or old, do to reduce further risk?

There are some minor and major symptoms before stroke. Migraines also can lead to major stroke symptoms, numbness and movement abnormalities may also be symptoms. To know about these symptoms, everyone should be alert and consult with doctors about these issues. We also need to raise awareness among the youth. In my opinion, all hospitals should screen for symptoms of this disease extensively. If a stroke patient comes in with symptoms, if he doesn’t have a stroke, he shouldn’t assume that nothing happened to me and nothing will happen further.

Rather, if he gets a clear understanding of other symptoms and strategies to stay healthy, he can be aware as well as make others aware. We have to make these signs simple for them. For example; there is a shorter term associated with stroke symptoms – FAST. F faces, means bending of face, A is arm, and it indicates paralysis or weakening of arm. S is speech, it means that speech becomes slurred or stopped. And T indicates Telephone. That is, if you see these symptoms, call the hospital without any delay.