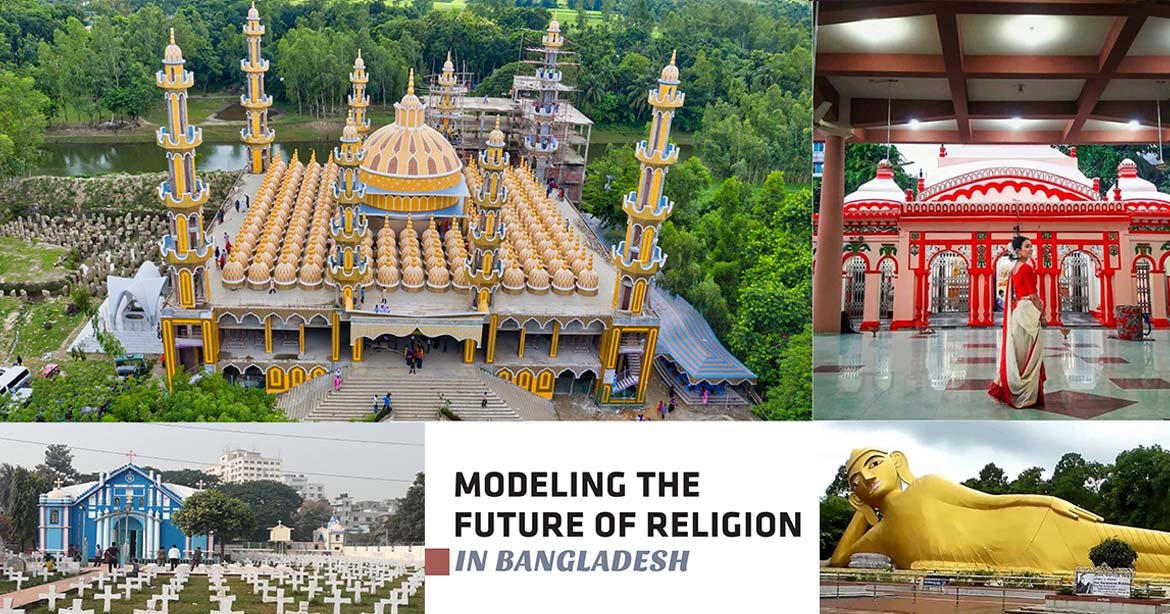 People of different religions live in Bangladesh with peace and harmony for centuries. The present government has been making every possible efforts to maintain the non-communal distinctiveness of the country and contributing extensively to all religious establishments. This portrays the country as a role model before the entire world in terms of maintaining and consolidating communal harmony, writes NASHIR UDDIN with MOHAMMAD RAFIUL HASSAN

Bangladesh is home to some 165 million people who are multi-religious, multi-ethnic, and multi-lingual. Religious minorities are estimated to be constituting about 12 percent of the current population. Islam, Hinduism, Buddhism, and Christianity are the four major religions in the country. Hindus make up about 10 percent of the entire population, Buddhists 1 percent, Christians 0.5 percent, and ethnic minorities less than 1 percent. With the non-communal coexistence of all these masses, Bangladesh is a real example of how people representing different religions can live together in peace, cooperation, and harmony.

In fact, Bangladesh is a country where religious freedom, harmony, and tolerance are valued. People here learn naturally to put aside their differences and embrace the diverse culture that has contributed to the country’s equality. People of different ethnic and religious backgrounds have been living in peace for thousands of years. This country, thus, is an example of social harmony due to its rich culture of tolerance and respect among people irrespective of their views and attitudes, which have been reflected in the country’s constitution and the government’s rules since independence.

Bangladesh’s Constitution guarantees all citizens the freedom to practice their chosen religion freely and peacefully. In the coun- try’s 1972 Constitution, the Awa- mi League integrated secularism as a guiding principle of the state alongside democracy, nationalism, and socialism. Bangabandhu Sheikh Mujibur Rahman, after independence, worked to establish a non-communal Bangladesh. He dreamt for a non-communal country which reflects on the four fundamental principles – secularity, nationalism, democracy, and socialism – core ideas of the 1972 constitution. But the secularism principle was removed from the Constitution in 1977 by the 5th amendment by President Ziaur Rahman.

However, in 2010, Bangladesh Supreme Court declared the 5th amendment illegal and restored secularism as one of the basic tenets of the Constitution. The Constitution of Bangladesh thus incorporated ‘secularism’ as a ‘fundamental principle of State Policy’. It states that “the State shall endeavour to ensure quality of opportunity to all citizens.”

YOU CAN ALSO READ: AVIATION INDUSTRY: NEW FACELIFT OF BANGLADESH

While the ‘fundamental rights’ stated in the Constitution ensure, “all citizens are equal before law and are entitled to equal protection of law. The State shall not discriminate against any citizen on grounds only of religion, race, caste, sex or place of birth.” Thus, the provision of ‘non-discrimination on the ground of religion’ is guaranteed as a fundamental right under the Constitution. The Constitution also provides that every citizen has the freedom to adopt a religion or belief of his/ her own choice. Moreover, every citizen has the right to profess, practise or propagate any religion. Every religious community or denomination has the right to establish, maintain and manage its religious institutions. Hence, the country’s government bears the responsibility to rule accordingly.

The government is keen to maintain Bangladesh as a non-communal country. Prime Minister Sheikh Hasina restored religious freedom in the constitution as the cornerstone of the country’s secular identity and took various initiatives to ensure religious freedom. The government has reached out to minority populations and assisted Dhaka’s famous Dhakesh- wari temple in reclaiming property that it has previously lost. Some of the activities of the current government include renovation and restoration of more than 2,300 Hindu temples, 65 major churches and establishments for Christian communities, and building of a Buddhist monastery at the birthplace of Gautam Buddha in Lumbini, Nepal.

The building of a Buddhist shrine in Lumbini to serve pilgrims from around the world has set a clear example for all countries of the world that Bangladesh is a role model in case of preserving communal harmony. The government also constructed permanent offices for the Hindu, Buddhist, and Christian Welfare Trusts in Dhaka for the first time in Bangladesh. The government manages all mosques, temples, churches, pagodas, and gurdwaras in Bangladesh through the Ministry of Religious Affairs. The government believes in communal harmony and has set a glaring example of giving equal opportunity to the people of all religions.

In this regard, PM Hasina said “we are concerned enough to ensure that none of any religion feel neglected, and Bangladesh has set an example in the world to this end.” She said the government will ensure that the people of Bangladesh can perform their religious rituals with dignity and sincerity and the communal harmony that has existed here for thousands of years must be well-preserved at all costs. The Sheikh Hasina-led Awami League’s slogan ‘Dhormo Jaar Jaar, Utsob Shobar,’ (Religion as per one’s own, but festivals common to all) as a testimony of its secular values has set a precedent in the international community about communal harmony.

Media reports recently portrayed two people of different religions in Khulna a Hindu and a Muslim setting an example of communal harmony by empathising with each other’s religions. In Bagerhat, a Hindu man has donated property for the construction of a mosque and nine Muslim leaders of the local Awami League have donated a portion of their land for use as a crematorium meant for Hindus’ funeral service. In another example, a temple at Khojapur area of Rajshahi had been closed since 1975 over land issues, and the land which included the temple was sold to a Muslim.

The temple was never demolished and when some local devotees inquired about the temple recently, they found that the Muslim owner has no issues with its use and he opened his door for the Hindu people to worship. Besides, every year during Ramadan, hundreds of Muslim men, women, and children queue every day in front of a Buddhist monastery in Dhaka to receive iftar, the feast with which Muslims break their fast at dusk during the holy month.

Moreover, the initiative by Dharmarajika Buddhist monastery to distribute food to poor and destitute Muslims is a shining example of social harmony be- tween two groups from two different religions in a South Asian country.

The world is well aware of and admires Bangladesh’s inter-communal harmony. US ambassador-at-large for international Religious Freedom Rashed Hussain highly lauded religious harmony and freedom in Bangladesh while visiting recently. “We are very encouraged to see people from different faith groups who are living together peacefully here,” he said adding that quarters who are trying- ing to divide and create complications among people of different religions must be stopped.

The US ambassador-at-large appreciated the government’s initiative to ad- dress these challenges. Dr. Yousef bin Ahmed Al-Othai-meen, Secretary-general of the Organization of Islamic Cooperation (OIC), said on March 20, 2021, in a video message “Today Bangladesh is one of the brightest examples of religious harmony and peace.” He appreciated the government’s initiatives taken for the peaceful coexistence of different religion groups and for the development of the country. These recognition and appreciation of the communal harmony is surely a source of pride for the people of Bangladesh.

Bangladesh is a country where colourful festivals are held throughout the year in a befitting manner with great enthusiasm without any religious or racial boundaries. Various religious holidays such as Eid of Muslims, Pujas of Hindus, Christmas of Christians, Buddha Purnima of Buddhists, and some other religious days are observed nationwide with shared joys of all people irrespective of their religions. Certain festivals are deeply rooted in the social organism, and they continue to entertain people from generation to generation. These celebrations reflect not only the imprint of religion but also the imprint of society and the nation.

6 FESTIVAL SECURITY AND SOME UNWANTED INCIDENTS

For spontaneous participation of all kinds of people in the religious festivals, the government of Bangladesh ensures enough security for religious celebrations, such as the Durga Pujas and other religious festivals. Over 30,000 Durga Pujas are held across the country every year. Most of them go off without a hitch. On the contrary, it has been seen that some vested quarters had instigated attacks on Buddhist community and vandalized some Hindu temples in few occasions by utilizing the social media in the past.

Attacks on the Buddhist community in Ramu Upazila of Cox’s Bazar and attacks on different temples in Cumilla in the recent past were some separate incidents in Bangladesh. Immediately after the incidents, the government has taken all possible actions sincerely to address the issues and support the affected Hindu and Buddha communities.

Senior government officials visit regularly a number of the impacted locations and give the minority people assurances that they will receive proper protection and reimbursement for any losses. This reflects the general sense of security in the country, not just among the religious minority.

7 FESTIVAL SECURITY AND SOME UNWANTED INCIDENTS MISCONCEPTION AND PROPAGANDA

There are some misconception, misinformation, and propaganda building in the country regarding the decreasing number and persecution of minority, which is not absolutely true. Unfairly and without basis, Bangladesh is portrayed as a nation that discriminates against its minorities. However, the attacks on the Hindu and Buddha community is misrepresented to be a communal violence, but in reality, it cannot be called a communal attack. Because it has been found that, some local miscreants create situations and attack the religious minority for their own interests and to seize and loot properties, although they are few in numbers.

They not only attack the religious minority, but also the small ethnic groups such as Santal, Garo, Chakma, Marma, Tripura etc. to grab their lands, properties, and houses, and Muslims also fall in their prey. Because creed, caste or religion etc. are irrelevant to looters. In fact, these are separate incidents that does not symbolize the mindset of the whole Bangladeshi people. There is no communal extremism among the general population of Bangladesh, therefore, there is no communally worrying situation prevails in the country.

In the country, like Muslims, Hindus also occupy high positions in the government. Though 10 percent of the total population belongs to the Hindu community, their share in jobs and trades is much more. If there was religious sectarianism in Bangladesh, this would not have been possible for the followers of Hindu people.

Therefore, before calling these attacks communal, it is necessary to see whether there is a communal situation prevails in the country or not. If someone calls the people of Bangladesh extremist without looking at the existing social situation, then it will be nothing but a big propaganda against the people of this country.

To sign off, it can be noted that harmony among our different religious traditions is essential for peace and prosperity. Genuine harmony should be founded on mutual respect.

And respect should be based on a recognition that all the world’s major religious traditions are similar in having the potential to help human beings, live at peace with themselves, with each other, and with the environment.

To promote religious harmony, we need to advocate the idea of “harmony with uniformity” and must learn to respect each other. In this regard, a rich culture of tolerance and respect amongst individuals regardless of beliefs and viewpoints makes Bangladesh a model of communal harmony. People have been living here for a long time with confidence in inter-communal peace.

Inter-communal harmony is synonymous with Bengali culture. Considering this, the government makes every effort to protect the rights of all ethnic and religious groups. The world also recognizes and appreciates the inter-communal harmony of Bangladesh. Bangladesh, for all these reasons, can well be regarded as a role model of religious harmony across the world.