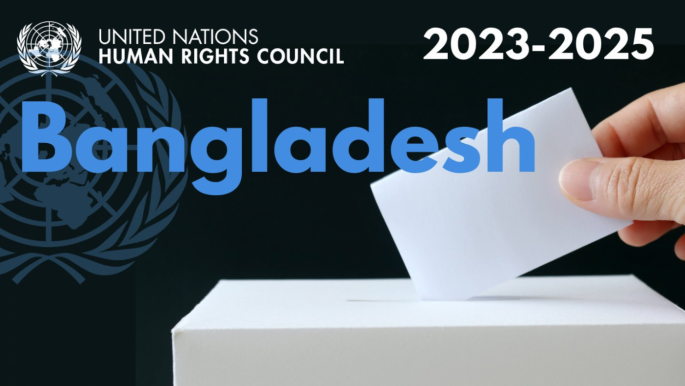 Bangladesh became a member of the United Nation Human Rights Council for the 2023-25 session with the highest vote count. The election was held in the UN general assembly in New York. Bangladesh got 160 votes out of 189 voting member countries, highest in the region.

17 countries from seprate regions were contending for 14 available sits in the 47-member coucil. Maldives (154 votes), Vietnam (145 votes), and Kyrgyzstan (126 votes) were other members elected from the Asia Pacific region. South Korea (123 votes) and Afghanistan (12 votes) lost out in the region. Bahrain also threw their hat initially but withdrew few days before the vote.

The elected members will serve in the council for 3 years and they are barred from running consecutive times. Bangladesh were elected as an UNHRC member four more times, in 2006, 2009, 2014 and 2018.

An official press release was released by the Foreign Ministry on Tuesday (11th October). The release says, “The Ministry of Foreign Affairs joins the whole nation for the celebration of a great moment of victory. Bangladesh, as a responsible and responsive Member State of the United Nations and an elected UNHRC member for next three years, remains committed to make all efforts to ensure the promotion and protection of human rights nationally and globally”

“The result of this extremely competitive election is a clear manifestation of the recognition by the international community of Bangladesh’s continued endeavour and commitment to the promotion and protection of human rights in the national as well as international arena. This also nullifies the ongoing smear campaign with falsified and fabricated information, by some politically motivated vested corners at home and abroad, aimed at negatively portraying the human rights situation of Bangladesh”, the press release continued.

The delegation team from Bangladesh was during the general assembly voting was led by State Minister for Foreign Affairs Md Shahriar Alam MP.