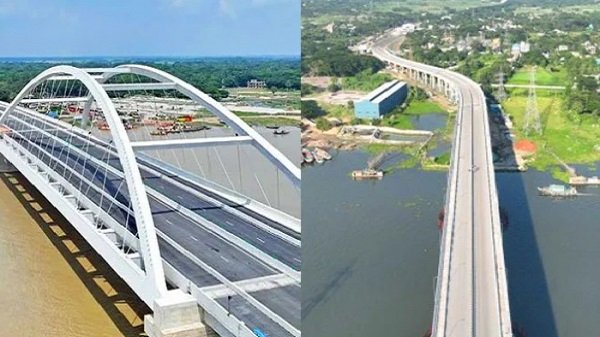 The PM said, “The two newly inaugurated bridges will play an important role in the development of this country and immensely intensify socio-economic advancement.”

The Modhumoti Bridge, locally known as the Kalna Bridge, is the country’s first six-lane bridge that connects the last missing link for the Asian Highway-1 route. The 690-meter-long and 27.1-meter-wide bridge significantly cuts the distance from Dhaka to Benapole land port in Jessore.

This bridge will internally connect the districts of Narail, Gopalgonj, Khulna, Magura, Satkhira, Chuadanga, Jashore and Jhenaidah. A sum of Tk 960 crore for the construction of the bridge was financed by Japan International Cooperation Agency (JICA).

Experts and project officials said the bridge will be a significant addition to the country’s road transportation system. The bridge will increase the logistical efficiency of the Mongla seaport, Noapara river port, and Benapole land port. People’s sufferings while waiting at the Kalna Ferry Ghat will also end with the opening of this bridge.

The 3rd Shitalakhhya Bridge has been named after veteran Freedom Fighter (Bir Muktijoddha) AKM Nasim Osman. The bridge will connect Narayanganj city with Bandar Upazila. The 1.29km bridge will enable vehicles bound between Chattogram and the southwestern region to bypass Narayanganj city to avoid traffic congestion and save time.

The bridge has a total of 38 spans – five in the rivers and another 33 connecting the eastern and western side. The total project cost of the bridge is Tk 608.56 crore, of which Bangladesh government funded Tk 263.36 crore and the remaining Tk 345.2 crore was funded by Saudi Fund for Development (SFD).

This bridge will also directly connect the Bandar Upazila and Sonargaon Upazila with the district headquarter in Narayanganj city. The bridge offers an alternative to the Jatrabari route for connecting the Dhaka-Chittagong highway, which often faces severe traffic congestion.