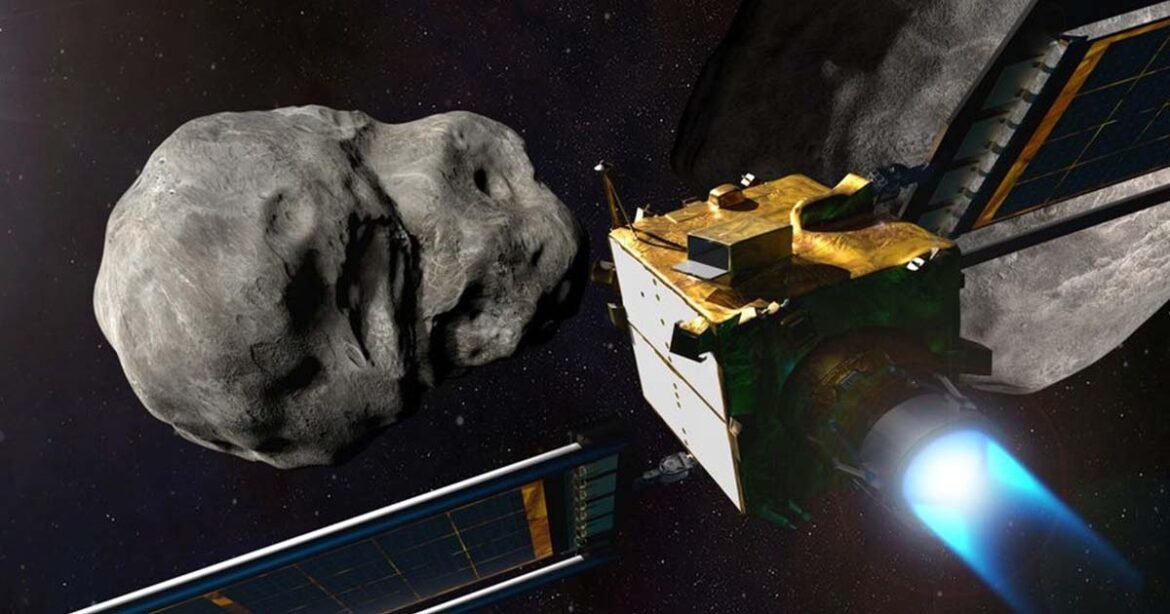 United States’ space agency National Aeronautics and Space Administration, widely known as NASA recently conducted a fruitful mission. NASA’s DART spacecraft successfully hit an approaching asteroid far away at hypersonic speed on Monday. This was the first test of a planetary defence system, which is meant to stop an apocalyptic space rock from hitting Earth. The purpose of the collision was to see if space objects that might threaten Earth by approaching towards it, might be safely pushed aside.

The first attempt of kinetic impactor

A small spacecraft operated by NASA successfully collided with an asteroid at a speed of 14,000 mph. Ten months after DART Double Asteroid Redirection Test, or DART was launched, humans made their first attempt to change the path of an asteroid or other celestial body through a NASA webcast from the mission operations centre outside Washington in US. ‘Kinetic impactor’ was first demonstrated by NASA as a potential planetary defence method. The goal is to strike an asteroid just hard enough to change its orbital track, assuming it poses a threat.

The livestream showed pictures taken by DART’s camera as the cube-shaped “impactor” vehicle. It is about the size of a vending machine and slammed into the asteroid Dimorphos on Monday, about 6.8 million miles from Earth. The camera on Dart sent back one picture per second right up until it hit the target, a 160-meter-wide object called Dimorphos.

Prior to the final approach, Dimorphos’ specific shape and composition were unclear. The impact of the asteroid was predicted to produce a plume of debris, but no significant structural modification. According to preliminary assessments, Dimorphos’ exact centre was only 17 meters away from the crash site.

The asteroid Dimorphos is about the size of a football stadium. Another expert compared it to the Great Pyramid of Giza. It orbits the much bigger asteroid Didymos. Our planet is neither currently nor in the near future threatened by either of them. However, even little modifications to an asteroid’s path could rescue the Earth. If an asteroid gets hit early enough, say 5 to 10 years before it is expected to hit Earth, it may be just enough to slow it down and cause it to miss.

It won’t be known whether the experiment was successful until further ground-based telescope measurements of the asteroid next month. However, NASA officials commended the test’s early results and said the spacecraft succeeded in its mission. However, Dr Lori Glaze, the director of planetary science at the space agency, highlighted that something remarkable had been achieved.

“We’re embarking on a new era of humankind, an era in which we potentially have the capability to protect ourselves from something like a dangerous hazardous asteroid impact. We’ve never had that capability before, what a wonderful thing” Dr Lori Glaze, the director of planetary science informed the press. Additionally, Dr Elena Adams, a mission systems engineer at JHU-APL, stated that “Earthlings should sleep better” now that they have a defence strategy for the earth.

DART , which was launched by a SpaceX rocket in November 2021, was mostly piloted by NASA flight directors until the last hours of the trip, when autonomous on-board navigation software took over. To identify the smaller rock from the larger one, the Dart probe, traveling at a relative speed of 22,000 km/h, had to stop first. The nearing trajectory was then modified by on-board navigation algorithms with thruster firings to ensure a collision head-on.

Dimorphos circled its 780m-wide partner for around 11 hours and 55 minutes prior to the crash. After the accident, this ought to shorten by a few minutes. On the basis of the images that were sent back from 11 million kilometres away from Earth, everything undoubtedly went as planned.

The $330 million mission, which took seven years to build, was designed to see if a spaceship could alter an asteroid’s trajectory just by applying kinetic force, just far enough to keep Earth safe.

Can we be hit by an asteroid?

Even though more than 95% of the large asteroids that could cause a global catastrophe if they collided with Earth have been found through sky, there are still many smaller objects that have gone undetected that could cause trouble, even on a local or city scale.