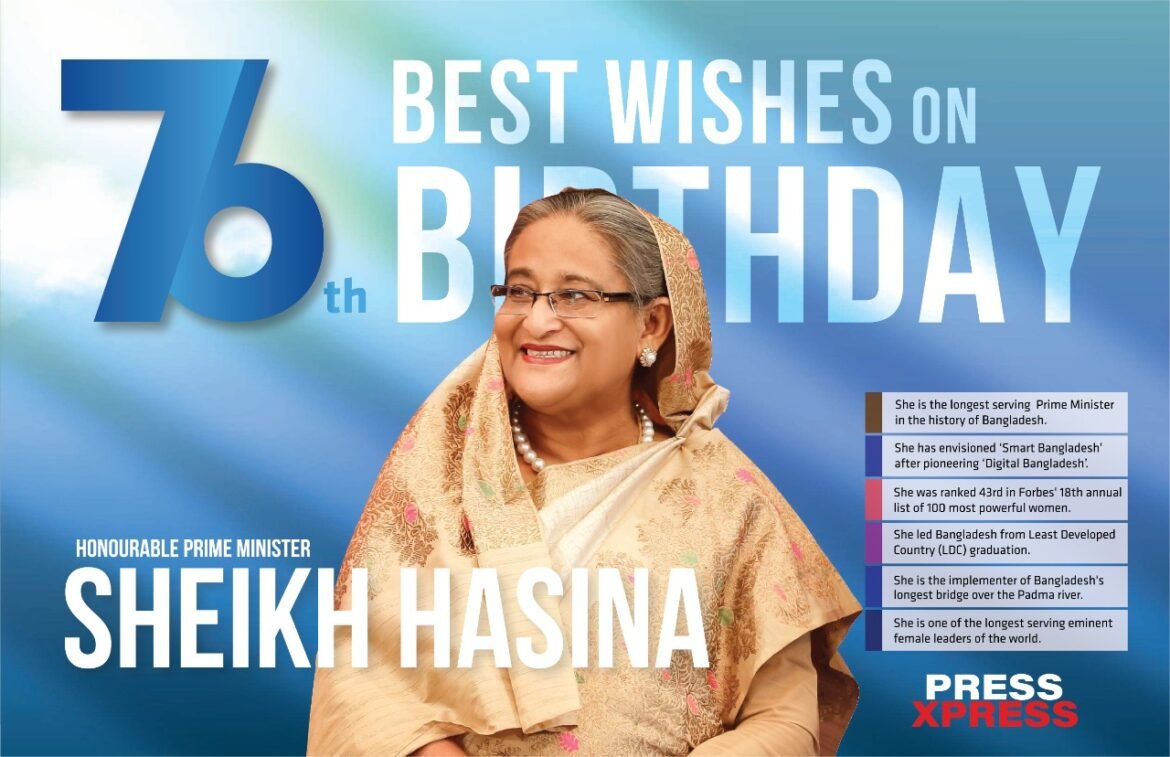 Bangladesh’s Prime Minister Sheikh Hasina became the intelligent politician and popular leader of today by witnessing and participating in the political struggle of her father Bangabandhu Sheikh Mujibur Rahman and this has been depicted below in chronological order: In 1962, she participated in anti-Ayub rallies to show her political wisdom and capacity while still in school.

In 1966, the entire country revolted to realize the six-point charter, which is considered the Magna Carta of Bengal’s emancipation. During such a tumultuous time, Sheikh Hasina was chosen by the Chatra League to serve as Vice-President of the student council at erstwhile Intermediate Government Girls’ College, Dhaka (which is presently known as Begum Badrunnessa Government Girls’ College). Later, she was the President and General Secretary of the Chhatra League at the same college, where she took an active role in the six-point movement of 1966.

Afterwards, Sheikh Hasina participated actively in the mass uprising of 1969 as the Dhaka University Chhatra League member and General Secretary of the Rokeya Hall committee.

On August 15 in 1975, the background of Sheikh Hasina’s involvement in the direct politics of the Awami League was disrupted by one of the most heinous and gruesome murders in recorded history, in which she lost her parents, brothers, sisters-in-law, and other family members.

On February 15 in 1981, she was chosen as the Awami League President while she was still exiled. Sheikh Hasina decided to engage in politics after coming back to the country defying the death threat.

On May 17 in 1981, Sheikh Hasina stepped on the land soaked in her father’s blood with the new message of acknowledging Bangabandhu’s dream and the liberation of the people of the country. At the airport, she declared her unwavering politics to establish the rights of the people after millions of people embraced her with love.

During this movement, Sheikh Hasina was elected as a Member of Parliament from three parliamentary districts in the general elections that were held in 1986. The constitutional procedure to revoke the military rule began after that election. She played a pivotal role as the Opposition Leader in this process.

Later on December 6 in 1990, Ershad was forced to resign as a result of Sheikh Hasina’s efficient leadership in the historic mass movement at that time. Sheikh Hasina has since become the nation’s face of democracy.

Although Awami League could not come out successful in the 1991 parliamentary elections, Sheikh Hasina retained the party’s leadership to uphold the rights of the people.

On March 26 in 1992, the historic trial of war criminal Ghulam Azam was conducted at Suhrawardy Udyan by a public court under the joint leadership of Shahid Janani Jahanara Imam and Sheikh Hasina.

On February 15 in 1996, Sheikh Hasina led a nationwide movement against the voter-less bogus election held by the BNP-led government. The illegitimate BNP government was forced to resign after only 15 days as a result of this movement. Sheikh Hasina-led Awami League, 21 long years after the murder of Bangabandhu, became victorious in a national parliamentary election and assumed power on 12 June 1996.

Sheikh Hasina faced 19 attacks from the anti-independence coalition of the Jamaat-BNP between 2001 and 2006. But she never gave up on her mission to secure the rights of the people of Bangladesh.

Late in 2006, the BNP-Jamaat government conspired with their supporters under the guise of the “caretaker government”. Sheikh Hasina led a strong mass movement against the plan of holding yet another bogus election. Thus, Sheikh Hasina was imprisoned in a fabricated case by the military-controlled caretaker government that emerged after January 11 in 2007, which is known as the one-eleven regime. Many of her party’s senior officials were on the edge of straying at the time, but by providing guidance through letters from the jail, Sheikh Hasina was able to keep the grassroots-level leaders unified.

For more than 40 years, Sheikh Hasina has served as the Leader of the Awami League, which is one of the oldest and biggest political organizations in South Asia. Despite her long reign, no faction within the party could unite to overthrow her, and she has continued to successfully guide both the nation and the party. Sheikh Hasina’s judicious political wisdom and tenacity have made all these possible.

Teaching values ​​to children through ‘Hasina and Friends’ game