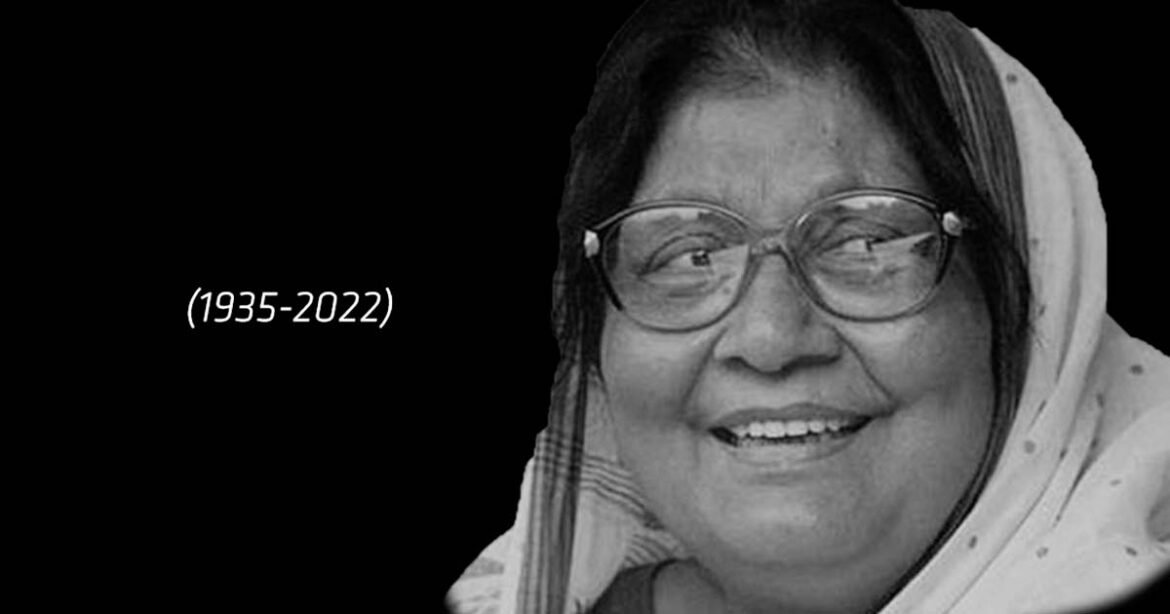 Deputy Leader of the Parliament and Presidium Member of ruling Awami League Syeda Sajeda Chowdhury is no more. The veteran politician, following post-Covid complications, was admitted to the Combined Military Hospital in Dhaka, where she breathed her last around 11:40 pm last night, her son Shahdab Akbar Chowdhury informed.

President M Abdul Hamid, Prime Minister Sheikh Hasina, and the Leader of the Opposition GM Quader expressed shock and offered tributes to her and deepest condolences to her family.

She is survived by three sons and one daughter. Her first Namaz-e-Janaza was held in Faridpur around 11 am today. She will be buried at Banani graveyard upon another Janaza at South Plaza of the Parliament.

Also, you can read: AWAMI LEAGUE GENERAL SECRETARY: WHO’S NEXT?

Syeda Sajeda Chowdhury was born on 8 May 1935 in Magura. The old guard was involved with the Bangladesh Awami League since 1956. She served as the General Secretary of the party’s woman wing, Mohila Awami League, from 1969 to 1975. During the Independence war in 1971, she established a nursing home in Kolkata for refugees. She was an active combatant during the war also. During the post-war, she was the director of the Bangladesh Women’s Rehabilitation Board, working with women who suffered in the war until 1975. She was awarded the highest civilian award in the country, the Independence Award, in 2010.

After 15th August 1975, she was one of the key personnel who steered Awami League through its most difficult political moments as its acting General Secretary. Mrs. Chowdhury was officially made the General Secretary of the party from 1986 to 1992. Till today, she’s the only women to have held the crucial party position. She was also the presidium committee after that. She is considered as one of the most trusted political confidants of Prime Minister Sheikh Hasina.

Syeda Sajeda Chowdhury was elected to Pakistan’s National Assembly in the historical 1970 election. She was again elected as a Member of the Parliament in Bangladesh’s first parliamentary election in 1973. Mrs. Chowdhury was elected multiple times as an MP from her Faridpur-2 constituency.

As Awami League formed the government in 1996, she served as the Minister of Environment and Forest. From 2009 onwards, she has been serving as the Deputy Leader of the Parliament.