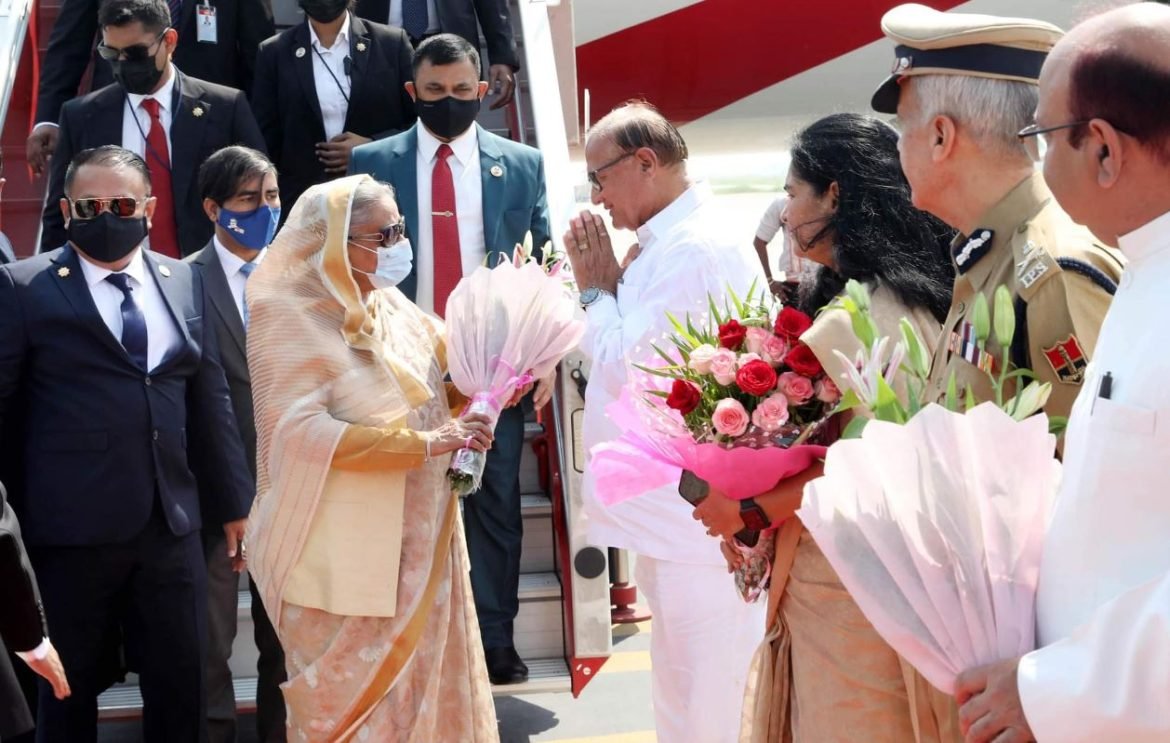 Prime Minister Sheikh Hasina has returned home this evening after wrapping up her four-day state visit to neighbouring India.

Earlier, she departed from Jaipur International Airport in Rajasthan at 5:30pm (IST) as high level local government representative and Bangladesh High Commissioner to India Muhammad Imran saw her off at the airport.

Prior to leaving Jaipur, the prime minister offered nafal prayers and munajat at the Khwaja Gharib Nawaz Dargah Sharif, Ajmer in India’s Rajasthan, seeking development, prosperity and welfare of the country, its people and the entire Muslim Ummah.

Earlier, she reached Jaipur of Rajasthan from New Delhi to offer prayers at the Ajmer Sharif.

The PM started her India tour by offering prayers at the much-revered Nizamuddin Aulia Dargah in New Delhi on September 5.

Before that, the Bangladesh premier arrived at the Palam Airport in New Delhi on September 5 as India rolled out the red carpet to welcome Sheikh Hasina.

On the first day of her India visit, Indian External Affairs Minister Dr S. Jaishankar paid a call on the Bangladesh premier at summit room of her Place of Residence, ITC Maurya Hotel in New Delhi.

Sheikh Hasina had bilateral talks and a one-to-one meeting with Indian Prime Minister Narendra Modi at the Hyderabad House on the second day of her India visit on September 6.

The Bangladesh premier was formally received by her Indian counterpart while a ceremonial guard of honour was accorded to her.

After holding the bilateral talks, seven MoUs (Memorandums of Understandings) were signed between the two neighbouring countries that included a MoU on withdrawal of 153 cusec water from Kushiara River by Bangladesh.

A joint statement was issued later in which India has offered free transit to Bangladesh for exporting its products to third country as Bangladesh premier and her Indian counterpart Narendra Modi have reiterated their strong commitment to strengthen bilateral relations further.

On the same day, Sheikh Hasina joined a luncheon hosted in her honour by the Indian premier.

The premier paid homage to Mahatma Gandhi at Raj Ghat on September 6.

The next day, Minister for Development of North Eastern Region of India G. Kishan Reddy and Nobel laureate Kailash Shatyarthi had calls on the Bangladesh premier.

Congress Leader Rahul Gandhi also paid a courtesy call on Sheikh Hasina at her palace of residence on the same day.

On September 7, the Bangladesh premier addressed a meeting with top business leaders and a ceremony for awarding “Mujib Scholarship” to direct descendants of soldiers, officers of the defence forces of India, who were martyred or critically wounded during the Liberation War of Bangladesh in 1971.