Is Jamaat separation yet another tactical blow to BNP politics? 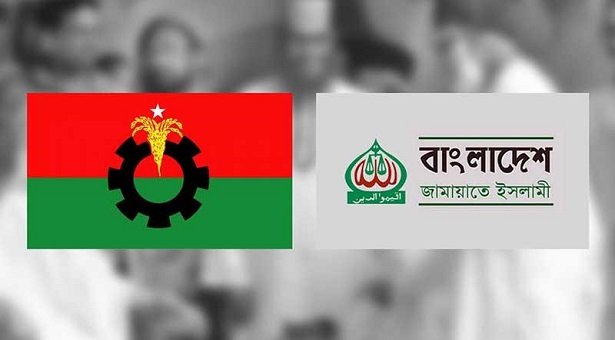 There is a lot of discussion going on in the country’s political arena regarding the news reports that said Bangladesh Jamaat-e-Islami has decided to sever ties with the Bangladesh Nationalist Party (BNP)-led opposition alliance. The issue came to the fore following a video speech given by Jamaat’s Amir Dr. Shafiqur Rahman, wherein he had the revelation of severing BNP ties at long last. BNP leaders, however, were sceptical saying that there’s a demand within the party for long to sever connections with Jamaat. Nashir Uddin with SM Tanjil-ul-Haque digs deeper into the details.

YOU CAN ALSO READ: BNP TO ENGAGE INTERNATIONAL COMMUNITIES’ TO RETRIEVE THEIR POLITICAL DYNAMICS?

It is learnt that most of the BNP Standing Committee members at a meeting barely a year ago gave their opinion in favour of severing ties with Jamaat. But that stance were not materialised due to tactical or any other unknown reason(s). What became known was a growing distance between Jamaat and BNP since then. BNP Standing Committee member Iqbal Hasan Mahmud Tuku recently said, “Jamaat has said – ‘They have discussed with us and reached a consensus. They won’t make any more alliances.’

What more is there to say?

”It speaks volumes about a possible rift. In fact, Jamaat, after Bangladesh’s independence was banned for taking an armed stand in favour of Pakistan during the liberation war in 1971. Later, they again got the opportunity to indulge in politics with the emergence of President Ziaur Rahman in 1979. After Khaleda Zia got the country’s leadership, the party became relevant in politics by participating in the BNP-led alliance. That affiliation has gone both ways in 2022. Hence, the questions arising in public minds are: will Jamaat really leave the BNP-led alliance? What has prompted them to do so? Isn’t it a sharp slap on the sinking political face of BNP? And the speculations go on.

What do the parties say?

In a recent video speech, Jamaat Amir Dr. Shafiqur Rahman said, “We have been with an alliance for so long. You may be thinking that something has happened or not? Yes, it has. This alliance was for the country till 2006. But, since October 28, 2006, this alliance has failed fulfilling its duties and from that day Bangladesh lost its way. Then it never came back.” He said, “We have thought a lot, there is nothing more beneficial in this alliance for Bangladesh. The various parties who are with this alliance, especially the main party, have no intention of making this alliance work. It is as clear as day to us. Now the reality is to rely on Allah from our own position. But yes, we will implement simultaneous programmes on the same demand in the national interest. We have discussed this openly with them, they have agreed with it. They will not make any more alliances.

“He further said, “Now we will try our best from each position. If Allah grants us Tawfik, then we will have to prepare hard in the coming days. We will have to accept a lot of sacrifices. I pray that these sacrifices will be good. Allah will reward us for these sacrifices and grant us a holy country. A country governed by the laws of the Quran.” On the other hand, Matiur Rahman, central press secretary of Jamaat-e-Islami recently told a news portal in this regard, “We have not made any official announcement of separation from the 20-party alliance. No such statement has been made by our party.” So, is Jamaat’s Amir’s statement personal? Answering this question, he said, “Even if we leave the alliance, we have to have a party meeting or a discussion among ourselves. But there was no such meeting or discussion within the party.”

BNP Standing Committee member Dr Khandokar Mosharraf Hossain recently said, “Jamaat has brought Bangladesh to this place today. These are the mistakes of the Jamaat.” After his speech, Jamaat-BNP leaders and activists started talking. Then on 2nd April 2022, a few leaders and activists including Nurul Islam Bulbul, Amir of Dhaka Metropolis South of Jamaat, were beaten up while attending the symbolic hunger-strike of BNP on the National Press Club premises. After these two incidents, the distance between BNP and Jamaat widened further. As a result, the Amir of Jamaat may have announced his party stance to desert the alliance. Asked about breaking the alliance with Jamaat, BNP Secretary General Mirza Fakhrul Islam Alamgir said, “We will inform in time. I will not comment on this at the moment.”

According to political analysts, there is widespread anger within the party that Jamaat did not get sufficient cooperation from the BNP during the trial of its leaders for crimes against humanity in the liberation war of the country. At that time, one after another leader of Jamaat was hanged, but BNP did not join them in the movement in the field. Many Jamaat leaders were annoyed with BNP for this.It is now apparent that the BNP-Jamaat chemistry was no longer working in a rejuvenated Bangladesh for obvious reasons. So, it was bound to be a failure this way or that way. Although neither party has announced anything officially about it, it’s quite clear that the political consensus between them came to a full stop – especially after remaining dysfunctional for quite some time.

However, many think that it was better for BNP to abandon Jamaat before the latter signalled an apparent divorce to the long-time political marriage. In that case, they said, BNP could gain more – thereby taking the political momentum. Conscious quarter and political analysts, too, are of the view that Jamaar Amir’s latest announcement has come as an apparent insult to an already wounded BNP in the field of politics with the next parliamentary elections only over a year away.