BNP to engage international communities’ to retrieve their political dynamics? 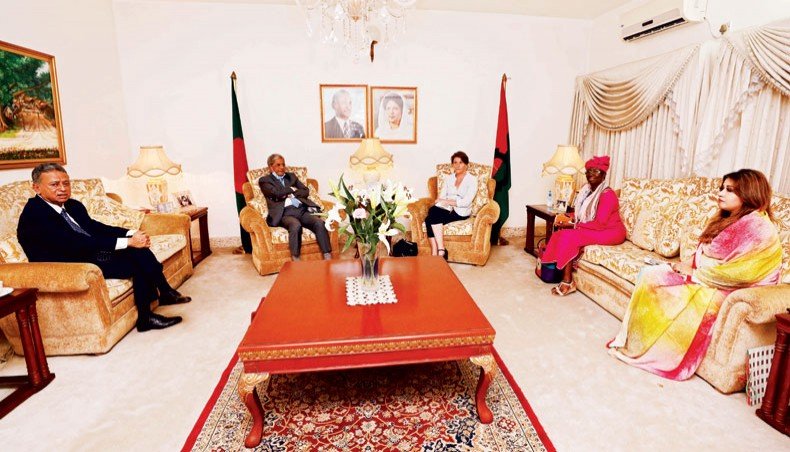 The top leaders of the Bangladesh Nationalist Party (BNP), held a meeting with Charles Whiteley, Ambassador of the European Union (EU) to Dhaka today. BNP did not say anything about the content of the meeting. However, many concerned think that this is part of the BNP’s periodic meetings with the international community. Just a day before, BNP top leaders met with UN Resident Coordinator Gwyn Lewis in Dhaka. On the other hand, due to the intimacy building activities by the BNP representatives abroad with the foreign officials, a question is already being raised among many, whether BNP taking refuge in the international arena to implement its political agenda?

The BNP delegation met the newly appointed United Nations Resident Coordinator (UNRC) in Bangladesh, Gwyn Lewis at the BNP chairperson’s party office in Gulshan around 2 pm on July 12. BNP secretary general Mirza Fakhrul Islam Alamgir, BNP standing committee member Amir Khasru Mahmud Chowdhury and organizing secretary Shama Obaid were present at the meeting. This is her first meeting with the BNP secretary general since Gwyn Lewis was appointed as Dhaka’s residential coordinator in May. After the meeting, Amir Khasru said that the UN Resident Coordinator had come to pay a courtesy call. However, the details of what happened between them were not known. Neither side spoke to the media after the meeting. Despite trying, no statement was found from the BNP leaders in this regard. However, according to sources, although it was a courtesy meeting with the UN Resident Coordinator, the political situation in Bangladesh and the upcoming elections also came up for discussion. The overall political situation of the country was presented to her by BNP.

Meanwhile, BNP chairperson Khaleda Zia’s former APS (Assistant Press Secretary 2001-2006) and former BNP international committee member secretary Mushfiqul Fazal Ansarey shared photos of Eid celebration at his residence in Washington on social media. Ambassador William B Milam, Director General of the United States Foreign Service and Director of Global Talent, Ambassador Marcia Bernicat, and Leica Johnstone, a senior State Department official on Bangladesh, were present in the event. Many are questioning whether this is an attempt to increase the capacity of the BNP with the international community behind journalism. Because, Mushfiqul Fazal Ansarey’s activities as a journalist have been criticised and questioned a long time ago. The BNP leader identifies himself as the editor of a news portal called justnewsbd.com. Earlier, in 2015, Bijon Lal Deb, the then Press Secretary of Bangladesh’s permanent mission to the United Nations, criticised his actions. He said, “If active politicians are given media cards, there will be nothing left to say, he is staying in New York and using his journalist identity to serve his party.” Following publication of news on this regard, Ansarey previously clarified his position and said he saw nothing wrong in being a journalist and an active supporter of a political party at the same time.

To end, BNP, not long ago, promised to take a firm stand on their “one-point” demand for elections under a neutral government. As part of this, the party announced to hold dialogues with all like-minded political parties. The main agenda of the dialogue is to bring a neutral election by overthrowing the government, not to go to the next elections under the ruling party, to speed up the movement from significant position, to build greater national unity against the government on the basis of consensus of political parties and to ensure the participation of all parties in the movement jointly or simultaneously. In this regard, BNP leaders said there is no alternative to movement on the streets. You have to take to the streets irrespective of your opinion. With an ultimatum, we have to go on the field with strict programs. We have to increase the speed of the movement by creating unity. Preparations are being made for all-party unity. But in the meantime, many think that sudden meetings with the international community will divert BNP away from their main focus.

Celebration of the French National Day