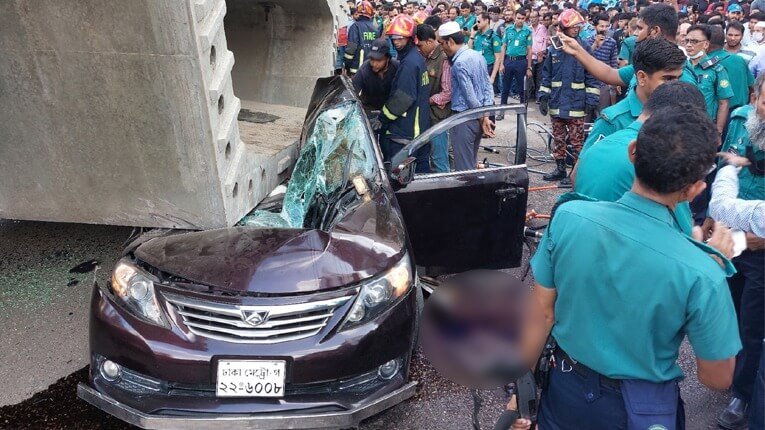 Five people, including a child, lost lives in a tragic private car accident when the Bus Rapid Transit System (BRT) project’s girder collapsed on them in capital’s Uttara. Two more people were injured. A five-member investigation committee has been formed in this incident. But who will actually be accountable for this tragedy?

He said, “The main issue is technical error. The girder of our project mistakenly fell from the crane outside the project area. The investigation committee will explain why this happened. At this moment we cannot say the exact reason behind the accident. That is why we are waiting for the inquiry committee report. They have been asked to submit the investigation report by 9 am on Tuesday (August 16).

The accident took place in front of Arong in Uttara Jasim Uddin area around 4:20 pm on Monday. There were seven members of the same family in the private car who were coming back from a marriage programme. The deceased are Rubel (60), Fahima (40), Jharna (28), Jharna’s two children Jannat (6) and Zakaria (2) who died on the spot. Only the newly married couple named Hridoy and Rhea Moni survived. They were taken to hospital in critical condition.

The victims could not be taken out of the private car after the accident. As the private car was buried under the girder, the fire service personnel could not retrieve the bodies. Later, the bodies were recovered by removing the girders with an excavator. Eyewitnesses said that the girders built for the BRT project were being removed with a crane. Meanwhile, the girder suddenly fell on the private car on the road. The girder actually did not fell off the crane, but instead flipped over on one side of the crane. It is believed by some that the crane was underpowered or operated incorrectly by the driver.

However, experts are suspecting negligence of the BRT project officials in the accident. They say safety practices were not properly followed during the construction work on the busiest main road. There was no safety net around. Many people have raised questions about how the construction works run in the mega projects of the government without prior warning to public. For this, they are blaming the negligence of the contractor company and the project concerned.

Professor Hadiuzzaman, Director of BUET’s Accident Research Institute, said in this context that there is no possibility of such an accident occurring if international-level safety practices were followed. It is a fast track project, 24/7 work is not a problem. Be it day or night there must be a safety net before carrying heavy materials or equipment. He said, “in case of girder falling accident, apart from the safety belt, whether the crane is in order, whether the crane was operating properly, whether the driver has a license, whether he is experienced, should also be seen through investigation.

Earlier on July 15, a security guard was killed when the BRT project’s ‘launching girder’ was pressed in Gazipur. A worker and a pedestrian were injured in the accident. After the accident, there was a discussion in various quarters about strengthening the security measures in the project area. Unfortunately, still no effective action was taken. The latest BRT accident happened in the meantime.