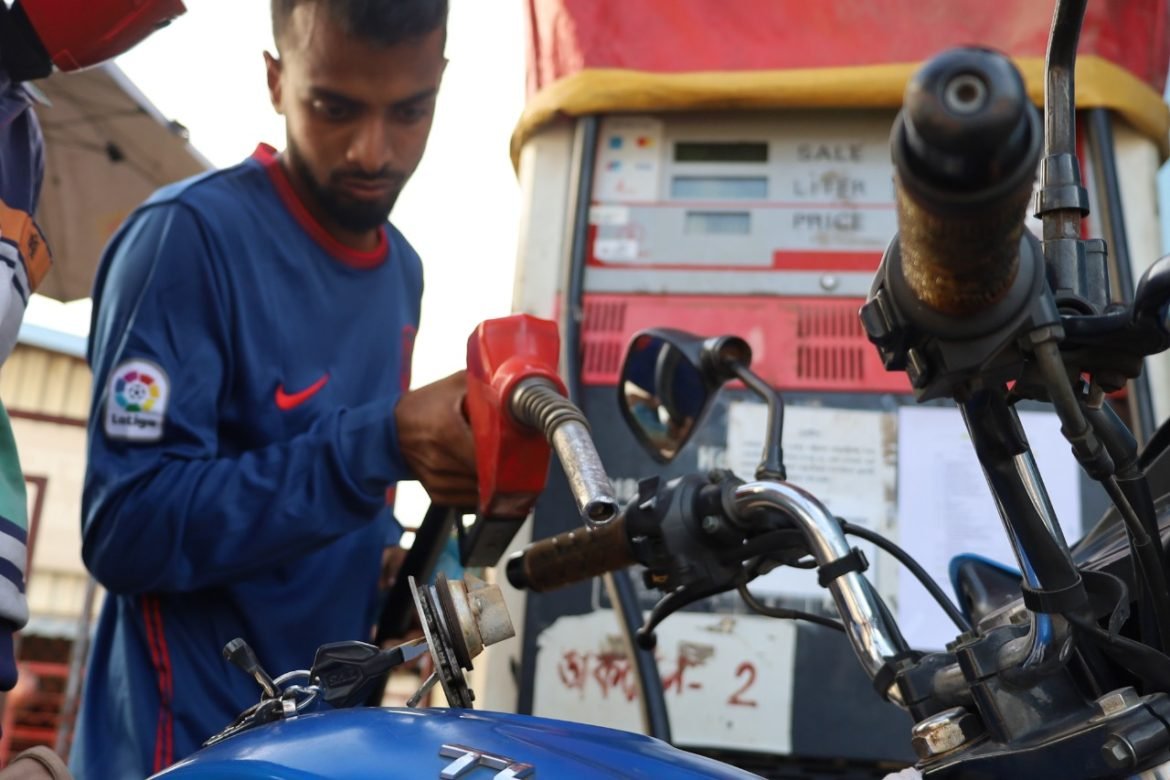 Many petrol pumps as well as public transport services in Dhaka remained closed on Saturday after the price of fuel oils was increased by about 40 to 50 percent in the country. Passengers and drivers complained that about 70 percent less number of public transports is plying on the city roads due to lack of fuel. Earlier on Friday night, the government issued a notification regarding the increase in fuel prices on the grounds of price adjustment. The price of diesel and kerosene has been increased from Tk 80 to Tk 114 per litre. The price of petrol per litre has been increased from Tk 86 to Tk 130. Octane price was increased from Tk 89 to Tk 135. Protests in some areas and long queues of vehicles in front of petrol pumps were seen in several parts of the country, including the capital, after the new prices came into force at the consumer level. Observing the ongoing turmoil, a question is now arising in the mind of people, what is the reason behind this unusual increase in the prices of fuel oils?

While the government has cited rising oil prices in the global market, the loss of Bangladesh Petroleum Corporation (BPC) and fear of smuggling as reasons for the unprecedented increase in the fuel prices in Bangladesh; analysts say the move was actually a part of the government’s willingness to reform its economy ahead of meetings with the creditor groups.

The government is trying to take a loan of about $4.5 billion from the International Monetary Fund (IMF) to deal with the emerging economic crisis. But the main condition of the loan from this organisation is thought to be the withdrawal of subsidy from the energy sector. Analysts now believe that the government might have met their conditions by raising oil prices before the official meeting on the loan they sought from the agency.

According to a BBC report, a large part of the 82,745 crores of subsidies allocated in the budget of the current financial year in Bangladesh is for fuel oil, gas and electricity. Last month, an IMF delegation came to Dhaka and advised the government to reduce the subsidy. In this regard, researcher and economist Dr Khondaker Golam Moazzem said the government is going to take loans from donor agencies and that is why the government decided to increase oil prices as part of subsidy management.

Economist Ahsan Mansoor, who has working experience with the IMF, said, “It was essential to raise the price of fuel oil. The government may have given a message before talks with the IMF that they are serious about this issue. But it was not right to raise price so much all at once, they should have increased the price gradually. If the prices were increased slowly, people would not have to bear this shock.”

Recently, some pictures were spread on social media, where a notice has been drawn on a petrol pump in Dhaka, which reads, “In order to save fuel consumption, a maximum of Tk 400 octane can be taken in motorcycles and a maximum of Tk 3000 octane or diesel in cars”. According to a report of bangle daily Prothom Alo, this notice has been pulled at the Trust Filling Station in Dhaka. In that news, it is also said that supplying companies are giving petrol, octane and diesel less than the demand of the filling stations.

In response to this, the BPC chairman said in a press conference that no instructions have been given to the petrol pumps to give less oil to customers and they are supplying fuel according to the pumps demand. “With the amount of oil that Bangladesh has and with the amount of fuel which are on the way to import, six months of fuel is guaranteed. Even if no oil is imported, the country has at least 32 days of diesel and furnace oil,” he noted.

Apart from the lack of fuel supply worldwide, BPC officials say that a reason for the increase in fuel prices is the loss faced by BPC. BPC has lost Tk 8014.51 crore in the sale of fuel oil in the last six months (February – July 2022) as a result of the price increase in the world market. Even before this, the company was making losses for a long time. However, since 2014, BPC has broken the circle of losses and started moving towards profit. But consumers did not get much of the benefit of that profit.

Earlier, the company had made a profit of around Tk 47,000 crore from the sale of fuel oil in the seven years from 2014-15 financial year to 2020-21 due to an unprecedented drop in oil prices in the global market. However, profits have been steadily declining since the start of the Ukraine-Russia war. But after seven years of profits, why this company could not cope with the rise in prices in the global market is a big question. Analysts say that despite seven years of profit, BPC could not keep its profits for use due to a law by the government.

In this regard, Dr Khondaker Golam Moazzem said, “In 2020, the new law about public sector corporations said that they have to deposit their surplus money to the government. That’s why BPC has given a huge amount of its profit to the government’s finance ministry. If the government doesn’t take that money, BPC could have handled the extra expenditure during this crisis.” State Minister for Energy Nasrul Hamid, however, said that BPC’s profits have been spent on the development of the energy sector, including the construction of a pipeline from Chattogram to Dhaka and the construction of a refinery.

On the one hand, as the import increased a lot in the background of strengthening economic activities after the Covid pandemic, the price of oil also started to increase. The price of fuel oil in the international market increased from 20-27 dollars per barrel to 120 dollars though it has come down to 94 dollars now. But when the price was low, the government took profit without reducing the price of oil in the country. But now when it is falling again, many are complaining that the price of oil has been increased to avoid the crisis. However, the way oil prices have increased in the global market in just one year is also worrying, experts believe.

According to the government, in 2021, the LC for fuel oil import is Tk 4700 crore, but it is surprising that in 2022 LC for the same amount of fuel has to be opened for Tk 9600 crore. State Minister Nasrul Hamid said that it was becoming impossible for BPC to import oil as the dollar price could not be adjusted. He said, “There were two options – either reduce oil imports or adjust prices. All countries have adjusted prices. We have also adjusted accordingly.”

Sri Lanka’s economic and political disaster has been discussed for months. Analysts are looking for a simultaneous crisis in developing economies in this discussion. Some countries with economies like Bangladesh are compared to the situation, which may experience a debt crisis or really bad situation. Although Bangladesh is under some pressure economically in the current global economic context, experts have opined that there is no danger of a situation like Sri Lanka in the country.

Visual Capitalist has recently published a list of 25 countries with debt risk, based on data from Bloomberg. Russia, Zambia, Suriname, Lebanon and a few countries are already in default. Belarus is at risk of bankruptcy. Argentina, Ukraine, Tunisia, Ghana, Egypt, Kenya, Ethiopia, El Salvador, Pakistan, Belarus and Ecuador—the 12 countries are on the list for inflation, debt and high borrowing costs. Luckily, Bangladesh is not in this list.

To conclude, experts have welcomed the government’s various measures to deal with the crisis, such as limiting the foreign visits of government officials, reducing the value of money against the US dollar, giving cash gifts to remittance providers from abroad, and imposing taxes on luxury goods. These initiatives have been taken as a measure to maintain the country’s foreign exchange reserves and easily meet the import demand.

US support in Rohingya repatriation in focus