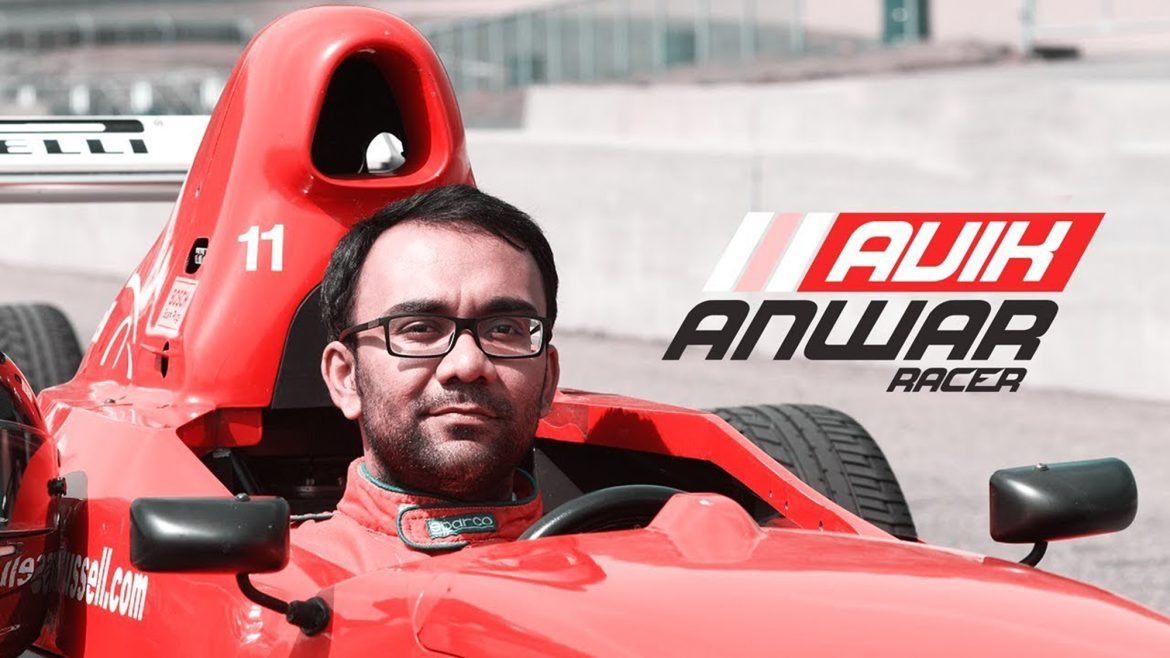 In March this year, Tauhid Avik Anwar, popularly known as Avik Anwar, had his name etched further into the record books upon winning the NGK Pro Car Championship in Dubai, UAE and becoming the first international motorsport champion from Bangladesh. Indeed, Bangladesh as a country for the first time ever tasted success on any racing track with this passionate racer. With a steering wheel on the racing track, Avik is moving ahead – leaving behind many of the world’s best racers and taking this country forward in the vast and elite world of racing.

Avik’s learning and passion for racing began as a child. He wanted to run at the speed of Schumacher, Vettel, and Hamilton. His dream was to hoist high his country’s red and green flag in the global racing arena. Driving on the streets of Dhaka, Avik thought and believed that someday he would make his country proud. After winning the first race in 2019, he didn’t have to look back. Since then his car has been running at an unstoppable speed, winning one championship after another.

Persistency Was the Key

Avik Anwar is an FIR recognized professional racer. His dream of becoming a racer started in 1999. He dreamed of becoming a racer while watching Formula One racing on TV. Being a Bangladeshi, it was a hard dream to live with. For those who are interested in motor racing in Bangladesh, the first obstacle is that the country does not have the necessary facilities for this sport. There are no skilled coaches for the game, no racing tracks. So it is a very difficult challenge to develop one’s self as a racer on the soil of Bangladesh. Nevertheless, he cherished this dream and later migrated to foreign lands for study. He was invited to study Economics at the University of Toronto in Canada. And that opened the door for him to fulfil dream.

When he went on study in Canada, he saw that he could take racing training by putting in little efforts. Because, racing in Canada is not as rare as in Bangladesh. There are trainers, there are racing tracks and other necessary facilities. The only thing tied up there is money. Since motor racing is an expensive venture, it takes a lot of money to be a racer. He studied in Canada and worked part time. He used to save money earned from his part time job to become a racer. Gone are the days when Avik used to delivery pizzas on the streets of Toronto, on a bone-chilling winter like minus forty degrees Celsius just to save money and make his mark on the racing track. That’s how difficult it was. But he did not give up, rather went ahead with the goal of fulfilling his dream with double enthusiasm.

Thus, he saved money for racing till 2009 through strict perseverance. That same year, Avik started practicing at Toronto Motor Sports Park, a racing track in Toronto in Canada with the money he had saved. It takes a lot of money to practice on this particular racing track. Avik spent his hard-earned money to practice on this track. Avik also had to spend a lot to take part in a racing tournament. Specific racing certificates and licenses are required to participate in such racing competition events in Canada. Racing certificate is available from India that cost 50,000 taka. After receiving the certificate one has to apply for a racing license. The cost to get a racing license is twice as much as a racing certificate! With the racing license any racer can take part in a verified motor racing tournament.

From Businessman to Racer

He returned to the country from Canada in 2014 and concentrated on the car business he owns in Bangladesh. There is a car dealership business he owns called Car House. He is continuing his racing by the money he earns from his business. But, he couldn’t stay far from the tracks. He participated in the Rally Cross Championship in Dhaka. Avik was also the first in this competition. But that was not a professional racing competition. So he started looking for a professional racing competition.

Finally, in 2016, he got the chance to get his name registered as a competitor in a professional motor racing event, which called the Amio Cup of India. He took part in that competition. For that, he had to spend almost 1.2 million taka! So, one needs that huge amount of money to just participate in a racing event. Another key requirement to get victory in a racing event is that one needs a professional racing coach. From 2016 to 2019, he did not have a coach of his own; so it took a long time to achieve success. Avik Anwar joined Momentum Motor Sports, a racing team in India, for coaching. With training and guidance from there, he has been able at long last to achieve the success he desired.

The glories and laurels

Avik Anwar first gained attention in the year 2019 when he won the Volkswagen Amio Cup, the international racing tournament held in India. He became the first Bangladeshi to win an international racing competition with this victory. Avik also finished third in the Malaysian racing circuit the same year. He had to go through so many crashes in that race. Subsequently, he became the first Bangladeshi to qualify for FIA-recognised P1 and P3 races in the UAE as a result of his accomplishments.

Despite the fact that several international automobile races were scheduled for 2020, most of them were cancelled or postponed due to the global coronavirus outbreak. However, Avik has had an extremely active year in 2021. In fact, he has had a lot of success in international motorsports in the year. Avik fulfilled his dream of driving a Formula 1 racing circuit for the first time in February 2021 at Yass Marina in Dubai.

This Formula One track in Abu Dhabi is well-known among the car racing enthusiasts. There are 16 turns in this 5.261 km track. He was the first Bangladeshi to finish third in the UAE Pro Car Championship in that event. By finishing on the podium, Avik paid tribute to the language martyrs. He was successful in the United Arab Emirates once more in April, 2021. Avik and Affan Sadat represented Bangladesh this time. They took first place in the two-hour event. Avik came out victorious in three races in a row. In November, 2021, He took the first position in the NGK Pro Car Championship at the Yass Marina Formula 1 track in the UAE with the Toyota GT86 Model Car, edging out Helal Almazrouei and Fahad Alzaabi.

As Avik created yet another history in April this year upon triumphing in the NGK Pro Car Championship in Dubai, he dedicated this achievement to Bangladesh’s ODI cricket team captain Tamim Iqbal that shows the sheer relations they have. In fact, Avik and Tamim’s friendship goes a long way back. Apparently, Tamim used to tease Avik for not winning anything big in the international circuit when he started racing. Avik once mentioned that on a social media platform. “He used to joke with me that I don’t win anything. I told him to give me some time and I’ll definitely win something soon. So, when I won for the first time in 2019, I told him that and he was very happy and proud. I couldn’t dedicate that win to him, but the second time I won I dedicated my win to him. It was a genuine gesture,” said Avik.

As Bangladesh’s first ever racing champion, Avik Anwar shared his feelings and ideas in an interview:

• What got you into motor sports?

I have passion in me for cars since childhood. In fact, the immense pride for the country, the surprised look on the faces, and the passion I had since I was a little kid brought me here. A lot of people have passion, but they can’t follow it. I worked hard to come this far and I’m not going to stop here.

• How did it feel to make history for Bangladesh?

It feels superb. Specifically, after the Volkswagen Polo Cup race, I said before in an interview that winning that race in India is equivalent of winning ten races elsewhere because that race was extremely competitive. The timing of the first 14 cars in the qualifying race ranged between one second. I feel that this race is as competitive as a Formula One race. 14 cars qualifying with timings ranging within one second is a very unique thing to happen. The races in India are really tough and challenging. The cars, fuel level, weight, everything is same. So, the margin of error is very thin. You have to use your wits to win a race here. You also have to think about how to deal with people, how to handle cars. It’s also important to be politically correct, because racing is done in two stages, inside the track and also outside of it. This makes winning a race obviously amazing.

There is an untapped potential for motorsport in Bangladesh, but they can’t flourish due to a lack of infrastructure for training and the necessary aid from big companies or the government. But I hope this situation will change shortly and the opportunities for motorsport enthusiasts will grow in the country.

• What’s your suggestion for the aspiring drivers in Bangladesh?

Nowadays in Bangladesh, there’re PS4 or PS5 consoles in many homes. You could also attach a simulator like the Logitech steering wheel with desktop or laptops. By using this steering wheel, which would cost Tk 28,000 at most, or a console and a decent internet connection, anyone can take part in motorsport tournaments online. Those who are good in simulation can easily enter motorsports to start with. I also once took part in one such virtual tournament in India. But I couldn’t win that race as my arm was broken. If I could do it, anyone can do it if they want.