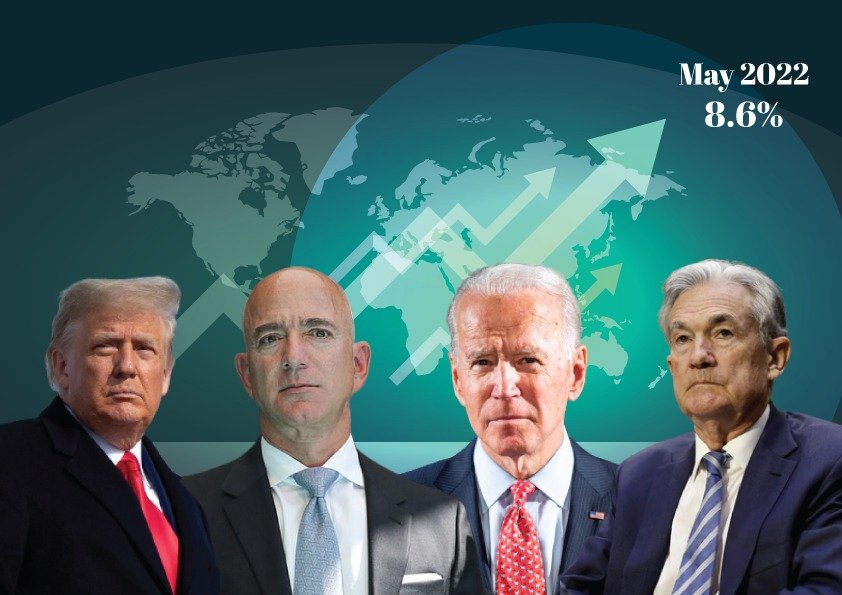 Contemplating current scenario, it’s clear that high inflation is not going away anytime soon. Many are pointing finger at the US President Joe Biden, others say it’s the former president Donald Trump who’s responsible, others pointing finger at Fed Chair Jerome Powell and others at large corporations. Now I’m going to explain what is inflation, how it works, and who’s to blame for the fastest price increases in the United States in decades.

Inflation is a general rise in the cost of goods and services. It can occur for two reasons: an increase in the supply of money relative to the supply of goods or an increase in demand for goods relative to supply. It can be measured by a congress to track the price of goods and services from one month to the next and compare it to previous periods. We can observe how recently ongoing inflation stacks up. Inflation is a bit like a snowball rolling downhill, as prices start to rise for some items, other items that use those items and businesses that rely on them start to raise the prices as well.  If this gets out of hand, runaway inflation can occur, where prices rise by hundreds or even thousands of percentage points in a year. But that’s extremely rare, and generally happens when governments and central banks make huge mistakes. In the United States, inflation is rising at an 8.6 percent annual rate, the fastest it has been in four years.

Some people are pointing their finger at the Federal Reserve Chair Jerome Powell. Legendary economist Milton Friedman famously said inflation everywhere is always a monetary phenomenon, and it’s true, the Fed pumped $120 billion dollars a month into the US economy for years, swelling its balance sheet to more than $8 trillion dollars and around half of that came after March 2020. Prior to 2020, Federal Government was using this strategy and inflation remained very low. After 2020 though, the Fed kept interest rates near zero despite trillions of spending by the federal government. They’re just now beginning to raise interest rates in an effort prevent the price increases which on contrary increases the cost of borrowing and slows down the economy, but rates are still negative as of today when accounting for inflation.

Then there’s the President and the truth is that the person deserves some blame. President Joe Biden signed the American rescue plan, which the Congressional Budget Office said would add $1.85 trillion dollars to the US budget deficit. And then there’s former President Donald Trump, who signed the $2.3 trillion dollars Cares Act and the $900 billion dollars Consolidated Appropriations Act in last December, one way to think of inflation is – too much money chasing too few goods and by providing trillions of dollars in money to American households, the President and Congress helped tip the scales on inflation. Donald Trump also nominated Powell to his role as Fed chair and Biden renominated him last year, so even if inflation is simply a monetary phenomenon, President is the one who picks the person in charge of monetary policy and therefore has to take a little bit of the blame.

Earnings report show that 500 companies on average are raising their prices by about 20 percent more than the rate of inflation for wholesale prices. That means, as the prices for their inputs have increased, they’ve raised the prices by a lot more. Their profit margins are also at a record high. So, a good bit of inflation is also due to the big companies. Let’s not forget Covid-19 pandemic, the war in Ukraine and some other price shocks have played a big role. And finally, there’s the regular working people. Every day, Americans push up inflation in two ways, first, by demanding higher wages from their employer, putting pressure on companies to raise prices to account for rising labour costs. And second, general populace keeps paying higher prices. If consumers stayed home and refused to buy at an unfair price, the company’s profits will take a beating. And they’d be forced to bring down the prices but because individuals keep spending, companies keep pushing prices up. The bottom line is no one person or entity is entirely responsible for inflation and in fact, you’re partially responsible too.