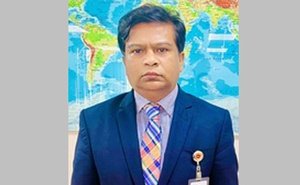 Zahid Hossain, a director at Biman Airlines, has been appointed as the national carrier’s new managing director.

He will replace Abu Saleh Mostafa Kamal, who has been made the Director General of the Department of Social Services.

The announcement came in a notice from the Ministry of Public Administration on Wednesday. Prior to his new appointment, Zahid was the Director of Administration, Human Resources and Logistics for Biman as well as its Director of Marketing.

The Fallout of Ukraine War Worldwide