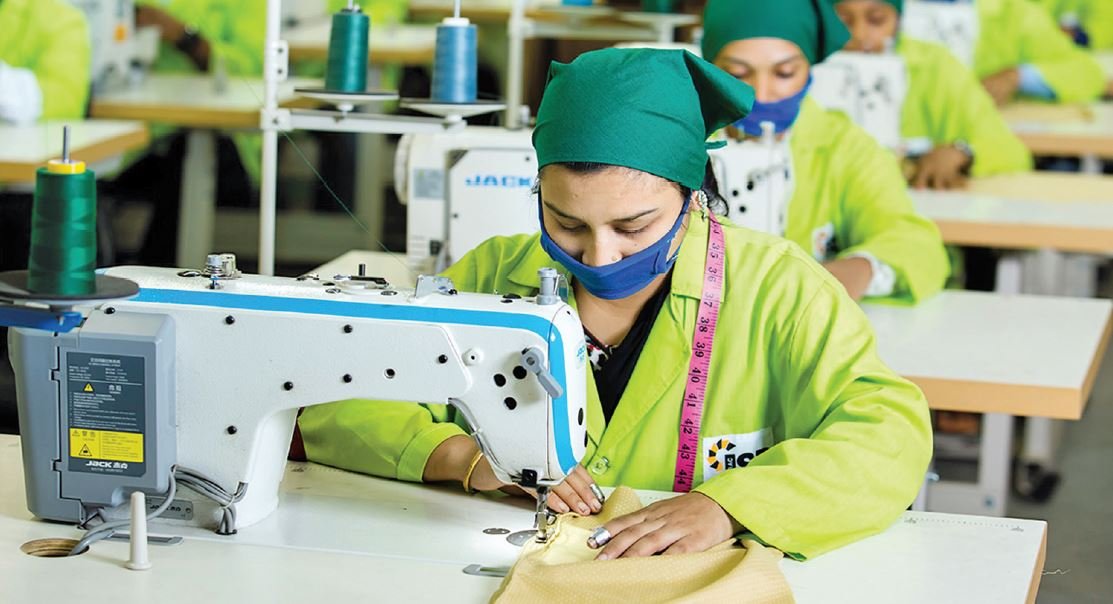 On the 9th May, the Export Promotion Bureau (EPB), the Bangladesh government’s export arm under the Ministry of Commerce, released its regular monthly report on the country’s export businesses. The latest report showed that in April of this year, US$4.78 billion worth of merchandises were shipped from the Bangladeshi ports to different countries across the world. Strikingly, the export proceeds in last month found 51 percent increase in terms of value, compared to the same month of the previous year. The April export earnings helped total 10 months’ export proceeds of the current 2021-22 fiscal year (FY) to cross 43 billion dollars, of which contribution of the country’s readymade garment (RMG) sector alone was a whopping total of 84.06 percent.

The trend of export shipments says even if no month-on-month growth takes place anymore in the remaining couple of months, the country’s annual export business will still amount to a massive figure of US$53 billion. So, by the middle of this year i.e. 2022, Bangladesh will be listed as a member of the club of countries that have $50 billion plus export earnings. Ukraine, Kazakhstan and Greece were listed in the last of the chart containing 50 countries each having $50 billion plus export earnings. In fact, more than two thirds of the $50 billion or more export revenue earners made their export proceeds by shipping oil and minerals or agriculture or food commodities. Bangladesh is apparently also different here as its major exports consist of manufactured goods, where the real strength of an industrial economy lies.

Bangladesh became independent just 50 years ago and celebrated its Golden Jubilee only last year. The country back in 1972 was poverty-stricken and famine- hit as it was known across the world. But now it is known, by consumers in more than one hundred countries of the world, as the manufacturer of garment items. In the European Union (EU), the largest market of imported apparels in the world, one of every three T-shirts is knitted in Bangladeshi garment factories. In the market of shirts, jeans and few other categories of garments in Europe and North America, Bangladesh has similar ratio of market shares.

Anwar Ul Alam Chowdhury Parvez, former President of the Bangladesh Garment Manufacturers and Exporters Association (BGMEA), said the export-oriented garment industry here, from its very beginning, had been made scapegoat and suppliers here had been sucked by the discounter brands and retailers in the Western markets due to our systemic weakness. Anwar is the eldest son of an engineer father, who started stitching unit in Dhaka in late 80s after coming back from USA upon completing his graduation there. Now he is the Managing Director of the Evince Group, employer of over 15,000 workers. Evince Group’s sister concern Argon Denims is a Dhaka Stock Exchange (DSE)-listed public limited company. “Now the apparel industry here has changed a lot and greater changes have been taking place in recent times. The industry is now undergoing phenomenal restructuring, consolidation and reshaping,” said Anwar Ul Alam Chowdhury Parvez.

SM Khaled, Managing Director of Snowtex Group and a new-generation entrepreneur of high-value garment units, said, “Much awaited transition in Bangladesh’s garments sector towards value-added garment manufacturing and shipments has begun at long last.” His Snowtex Group cuts and sews jackets and other heavy outerwear for famous global brands like Calvin Clein and G Star.

Abdullah Hil Rakib, a Director of the BGMEA, during a conversation said they see strong inflows of orders from the importers of jackets and outerwear from the USA and the EU countries. He is the Managing Director of Team Group, which also manufactures jackets for many famous Western brands. “By exporting jackets and fancy outerwear, Bangladesh can earn US$ 10 billion annually by the year 2025,” informed Rakib. In just 10 months of the current fiscal year by April, the country’s apparel shipments amounted to $36 billion, which is around four-fifths of the country’s entire export earnings. Mentionable here is that the T-shirts, Shirts, Jeans, and Bottoms-like light category of garments still consist four-fifths of Bangladesh’s entire apparel shipment revenue.

Bangladesh’s apparel Industry, the second largest in the world, provides jobs to more than four million workers and majority of them are females. However, the recent trend shows that ratio of females is on the decline in Bangladesh’s RMG industry. The industry insiders and analysts are of the view that a section of the women are somewhat reluctant these days in serving the apparel industry as they consider the wages here to be still low compared to demand of the workers. Critiques say that the standard of garment factories has developed much following Rana Plaza collapse, but wages of the workers have not increased that much. Wages of workers here are still ‘too low’ to meet standard cost of living for the workers – especially considering the high rates of inflation in recent years.

Analysts said this growth is not taking place due to strong demand from the importers in western markets. Strong increase in the prices of raw materials is the main reason for increased export earnings in terms of value. High price of cotton, cotton yarns and fabrics and accessories and abnormal rise in shipping costs have contributed to rising price of garments and thus amount of total export earnings from RMG sector grew consequently.

Moreover, young women in growing numbers are fascinated more to become self-employed as small entrepreneurs. In some other cases, they intend to work for relatively relaxed workplaces. An investment consultant, M Azizur Rahman opines that the increasing number of electronics and home appliance industries and other diverse industries in the country’s Export Processing Zones (EPZs) and Economic Zones (EZs) will invite workers with more wages in the coming years. Aziz, also a former General Manager of the Bangladesh Export Processing Zones Authority (BEPZA), now delivers consulting services to foreign investors at the EPZs and the EZs. He sees more and more Foreign Direct Investments (FDIs) to come to diverse industries here in the coming years.

Many people inside the apparel industry and outside are, however, a bit puzzled to see 30 to 50 percent growths in the country’s RMG export shipments in recent months. When asked, the analysts said this growth is not taking place due to strong demand from the importers in western markets. Strong increase in the prices of raw materials is the main reason for increased export earnings in terms of value. High price of cotton, cotton yarns and fabrics and accessories and abnormal rise in shipping costs have contributed to rising price of garments and thus amount of total export earnings from RMG sector grew consequently.

In real sense, what’s more puzzling is there’s no significant increase in the price of CM (cutting and making) of exportable dresses, which really make up the net earnings of Bangladesh’s garment industry.

In Bangladesh, buyers find out suppliers here as the latter perhaps give the lowest CM in the world, said Kazi Iftekhar Hossain, President of the Bangladesh Garment Buying Association (BGBA). “Bangladesh has been victimised ruthlessly by the so-called open market and competitive market theories,” noted Hossain, whose association mainly consists of local agents of foreign garment importers. He, however, agrees that even workplace environment has developed much in recent years with tens of dozens of world class modern stitching units set up with investment of several million dollars in each of those units, but unit price of apparels or CM has not been increased accordingly by the buyers.

BGMEA President Faruque M. Hassan talked to the Press Xpress (PX) about recent uptrend in the country’s export sector thanks largely to the booming garment industry:

PX: How is the state of Bangladesh’s RMG industry now?

Faruque Hassan: Bangladesh’s apparel shipments are quite satisfactory for the past few months, but this is not for increased number of orders only or increase in unit prices whatsoever. Price of raw materials and utilities have increased significantly in recent times, which in turn contributed to rise in costs of production and products as well.

PX: How is the global market trend now after the pandemic?

Faruque Hassan: After fall in gravity of the ongoing corona pandemic, global market trend is thought to be vibrant again and that has caused increased inflows of orders for Bangladeshi garment exporters. But in recent weeks, we are observing anxieties among the importers in Europe and North America as Ukraine-Russia war has pushed entire world to tension. The global economy has also been affected and likewise the global apparel market.

PX: How do you see the transitions in RMG industry now?

Faruque Hassan: Bangladesh’s garment industry has gone through lots of changes – especially after the Rana Plaza tragedy and consequent pressure on the industry. You know, maximum number of environment-friendly and sophisticated factories across the world are now in Bangladesh. Our industry will see many more changes and consolidations in term of expansions, technological upgradations, skill developments and diversification in products and we are confident that we will add more value to the economy in the days to come.