USA’S Growing Interest in the Indo-Pacific 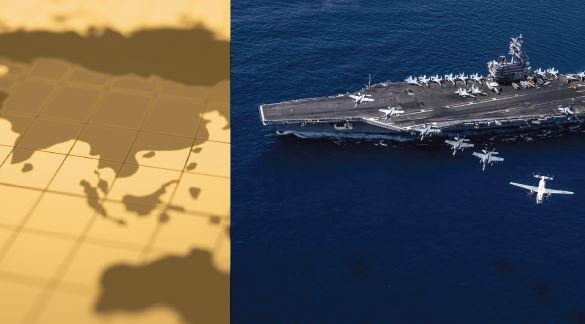 Within the last decade or so, world politics has gone through monumental shifts that have grave implications for countries across the world. With the shift in the world order from unipolarity to multipolarity, the centre of gravity of global politics has shifted to Asia. As the world rapidly shifts from a unipolar to a multipolar reality, the international system itself is exposed to profound instability. The primacy of the Indo-Pacific region in the US’s foreign policy was clearly visible during Obama’s “rebalancing strategy” or “pivot to Asia”. Resurgent Russia’s assertiveness in Eastern Europe and China’s reemergence as a great power has put the US-led liberal order under severe strain.

The reemergence of China as a potential great power and the relative decline of the US as the sole superpower has challenged the ‘unipolar’ nature of the current world order and brought ‘multipolarity’ to the global power structure. The tiredness of the US forces in the Middle East, Afghanistan and resurgent China warranted a shift in the geographical focus back on the Asia-Pacific region.

Although, to some extent, the ‘pivot to Asia’ or ‘rebalancing strategy’ by the President Barack Obama has failed to deliver on its promises, it successfully realigned the US focus in this region. Admiral John Aquinilo, on taking up command of the US Pacific Fleet in May 2018, warned his audience that, “great-power competition has re-emerged as the central challenge to the global security and prosperity. Nowhere are the stakes of that great-power competition, higher than in the Indo- Pacific.” Following the path of the major regional powers such as Japan, India and Australia, the US has adopted ‘Indo-Pacific in their official vernaculars by replacing the WWII old construction, the ‘Asia-Pacific’. In 2017, for the first time, ‘Indo-Pacific’ as a region was mentioned in the US National Security Strategy.

On the other hand, the US Pacific Command, which was responsible for all the US military activity in the greater Pacific region, had about 375,000 civilian and military personnel assigned to its area of responsibility. To highlight the centrality of the new geographical reality, in June 2018, the Command was renamed as the ‘Indo-Pacific Command’. The US grand strategy in this region, which is known as ‘free and open Indo-Pacific’ or FOIP, often gets compared as the answer to China’s ‘Belt and Road Initiatives.’ Therefore, analysts of international politics fear a great power rivalry in the Indo-Pacific region, which might put Beijing and Washington on a collision course. Such strategic competition will hinder the developmental progression of Asia as a region and destabilize its Geo-strategic environment.

The conceptual vagueness of the FOIP Strategy has raised some doubts in the Indo-Pacific region. While some have expressed support, South Asian and Southeast Asian states are wary that the strategy could cause great power rivalry in the region. In particular, the South Asian nations need financial support to build their infrastructure and energy capability. The estimated need for infrastructure in the Indo-Pacific region can reach up to $50 trillion by 2040. Despite broad agreement about the importance of increasing investment, there is no consensus about achieving that goal. The world’s leading and emerging powers, including China, Japan, and India, have competing visions for tomorrow’s infrastructure and different models for building it, including China’s Belt and Road Initiative (BRI) and Japan’s Partnership for Quality Infrastructure. An intensified strategic competition between the FOIP Strategy and BRI will put the Southeast Asian and South Asian Nations in a difficult place to take a position in this great power rivalry. On the other hand, the re-emergence of the quadrilateral framework or QUAD and, most recently, another security alliance, AUKUS, can undermine the role of the ASEAN and other sub-regional groupings such as BBIN, BIMSTEC, BCIM-EC in regional cooperation. This has brought the discussion to the shared future or the uncertainty of the common fate of the South Asian nations.

The uncertainty looms largely due to the strategic dependence on the vast maritime space of the Indo-Pacific region, which facilitates the international trade of goods and energy of the littoral and landlocked nations of this region. Today, increasing flows of commerce, investment, and people are linking the Indian Ocean and Pacific nations together and to the rest of the world as part of an emerging global trading network. The Indian Ocean region has long been the primary artery for pumping oil from the Persian Gulf into the global economy. Its geopolitical significance has grown due to major powers’ extensive reliance on sea routes for transporting energy resources and commercial goods. For example, the world produces 96.7 million barrels of oil on average per day. The Strait of Hormuz connects major oil producers, including Saudi Arabia, Iraq, the UAE, and Qatar to the rest of the world. The Hormuz, Malacca, and Babel Mandeb straits transport 18.5, 16.0 and 4.8 million barrels of oil respectively a day. If these straits shut down abruptly or even are under potential risks of conflict, any resultant commotion will severely impact the global economy. The Malacca Strait is equally crucial; around 25 per cent of the world’s crude oil passes through the Strait of Malacca and the Strait of Singapore. The United Nations Conference on Trade and Development (UNCTAD) estimates that 80 per cent of global trade by volume and 70 per ent by value are transported by sea; of that volume, 60 per cent passes through Asia, with the South China Sea carrying an estimated one-third of global shipping.

Besides China, Most of Japan’s and South Korea’s imports are from Middle Eastern suppliers and are transported through the Strait of Malacca and then the South China Sea. Hence, cooperation among the Indo-Pacific nations will be imperative to meet these emerging maritime challenges. In the coming years, we might see the Indo-Pacific region to be evolving into the fulcrum of international security affairs. As the global economic center of gravity has been shifting towards Asia and economies in the region are performing better, the cumulative defence budget is also rising due to the rapid modernization of the armed forces. Some characteristics of this modernization programme manifest action- reaction dynamics between competitor states which is a classic example of an arms race. An intensified US-China strategic competition in the Indo-Pacific region has been the primary catalyst to ignite this frightful arms race. However, several major regional flashpoints such as North Korean nuclearisation at the Korean Peninsula, increasing tension among the littoral states over maritime disputes at the South China Sea, renewed hostility over Kashmir between the nuclear neighbours India-Pakistan as well as tension in the Taiwan Strait, not only played a key role to exacerbate this arms race, these flashpoints has the potential to trigger a full-fledged military confrontation, undermine the regional security and destabilize the whole region.

Like many of its South Asian neighbours, Bangladesh is at the crossroad of its path toward development. Bangladesh has been on the fast lane of economic growth as it has achieved an average of 6.06 per cent of GDP growth rate throughout the 21st century. If it was not for Covid-19 pandemic-induced global economic downturn, the average could have gone near 7 per cent. When the war-ravaged country gained independence in 1971, the size of its GDP was only USD 6.2 billion and in 2021, the GDP grew to USD 323.06 billion (nominal), taking the country to the 42nd position in the world economy. On the basis of the emerging markets, Goldman Sachs has picked Bangladesh as one of the Next 11 economies of the world. In 2021, per capita income is USD 2462, whichwas only USD 135.62 in 1970.

As Bangladesh is poised to be graduated from the least developed country to a middle-income country, Bangladesh sets her objective to be a developed nation by 2041. Against this backdrop, it is absolutely important for Bangladesh’s development centric interest to maintain a stabilized Indo-Pacific region. This year Biden administration unveiled a new Indo-Pacific strategy which will have profound implications for Bangladesh and its two giant neighbours India and China. Bangladesh’s increasing geostrategic value was manifested in the flurry of recent visits by the US policymakers, where they tried to pursue Dhaka to enter into the fold of the Indo-Pacific Strategy. Under the Biden administration, the US-Bangladesh relations have gone through ebbs and flows.

The US has been one of the top destinations for Bangladesh RMG exports. During Covid pandemic, the US provided over 61 million doses of vaccine to Bangladesh, the highest donation by a single country in the world. Security cooperation between Dhaka and Washington regularly takes place in form of high-level security dialogue, and training exercises for military officers and law enforcement agencies. However, the human rights issue has been one of the central planks of the Biden administration’s foreign policy. The US imposed sanctions against current and former officers of the Rapid Action Battalion (RAB) in late 2021 was not received well by the incumbent Bangladesh government. Last month, the US Undersecretary for Political Affairs Victoria Nuland signed a draft defence cooperation agreement during her visit to Dhaka. This proves Washington’s eagerness to get Dhaka onboard in its greater plan for Indo-Pacific.

However, Bangladesh has tried to maintain a delicate balance in the midst of growing great power competition between China and the US. Infrastructure- driven economic development has been the thorn for many of Bangladesh’s South Asian neighbours like Sri Lanka, Pakistan and most recently, Nepal. However, despite ongoing mega infrastructural development; a growing middle- class market, robust manufacturing sector and strong foreign remittances are working as a guardrail for Bangladesh’s economy. Along with China, the EU, Japan and Russia have been partners in that endeavour, which testifies to Bangladesh’s impeccable balancing act among great powers so far.

However, as the great power competition grows in the Indo-Pacific region, it will be increasingly harder for countries like Bangladesh to maintain strategic autonomy in their foreign relations. Bangladesh needs to develop its own narrative regarding the future of this region.

Prime Minister Sheikh Hasina addressed a panel on ‘Cooperation in the Pacific Rim’ at the 3-day World Economic Forum Annual Meeting of the New Championship 2019 on Tuesday, July 2, 2019 where she said “my journey in politics tells me that any initiative in the Indo-Pacific should include the creation of an environment of peace, harmony and stability of all countries, should focus on all aspects of sustainable development, engage countries based on mutual trust and mutual respect for mutual benefit, focus on wealth creation for all where development must be inclusive, and lastly, create fair competition not rivalries.”

Bangladesh’s Foreign Minister Dr. AK Abdul Momen reiterated that Bangladesh wants to see an open, free, peaceful and inclusive Indian Ocean instead of any single country or group’s domination in the region. The narrative that Bangladesh is working on has to address three factors simultaneously. Number one will be acknowledging the geostrategic reality of the region. To foresee the capricious future and realign Bangladesh’s foreign policy objectives according to that will be paramount for the policymakers of Bangladesh. Secondly, Bangladesh’s foreign policy principles of maintaining neutrality and peaceful resolution of all the conflicts under a multilateral umbrella have to be codified within any policy regarding Indo-Pacific. Finally, the goal to be a developed nation by 2041, needed trade and infrastructural investment to achieve that should be at the center of any such narrative for Indo-Pacific.