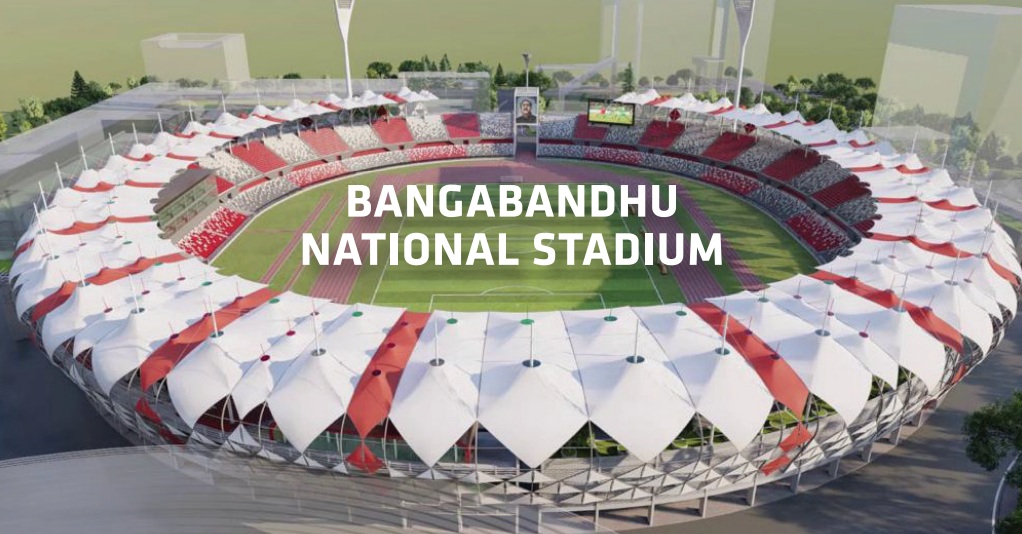 Bangabandhu National Stadium, also known as Dhaka Stadium, and formerly known as Dacca Stadium, is the national stadium and a multipurpose sports arena in Dhaka, Bangladesh. It is located in the Motijheel area in the heart of the city. Since 2005 the stadium has been home to both Bangladesh national football team and Bangladesh women’s national football team. The stadium has been renovated several times, most recently for the opening ceremony of the 2011 Cricket World Cup. It had a capacity close to 55,000 before the most recent renovation, but with a new capacity of 36,000 it is still the largest stadium in Bangladesh. Its current name was given to honour Sheikh Mujibur Rahman, the father of the nation, also known as “Bangabandhu” or “Friend of Bengal”.

The Bangabandhu National Stadium in Dhaka is the only venue in the world to have hosted an inaugural home fixture for two Test nations: Pakistan and Bangladesh.

India were the visitors on both occasions: in 1954–55, when Dacca was the capital of East Pakistan, and in 1976–77, when the first unofficial Test match was held between Bangladesh against the touring MCC from England.

Alongside cricket, the stadium was also known to Alongside cricket, the stadium was also known to host the historic Dhaka League, which was the country’s premier football league in the 80s and 90s. In the 80s when football’s popularity was skyrocketing, the Dhaka Derby attracted thousands of fans into the stadium from all over the country. The stadium has a history of hosting number of historic sports event starting from cricket, football, hockey to boxing. In February 1978, boxer Muhammad Ali fought an exhibition boxing match at the stadium, the then Dacca Stadium, with a 12-year-old Bengali boy.

With a purpose-built cricket stadium being constructed on the outskirts of the city, the ground was taken out of commission at the end of the 2004–05 season, and handed over for the sole use of the Bangladesh national football team. Other than being used for the 2011 Cricket World Cup, the stadium has been mainly used for football purposes since the turn of the decade.

The stadium has hosted the SAFF Championship three times to date. First during the 2003 edition which saw the Bangladesh national football team win the trophy for the first time in history. Since then the 2009 and most recently the 2018 edition of the tournament have all taken place at the stadium. Ever since the inception of the Bangladesh Premier League, in 2007, the stadium has been used has been used to host majority of the league seasons.

The venue hosted its last international cricket match on 1 March 2005. After 2005, hosting of International Cricket status was shifted to Sher-e-Bangla National Stadium, which was situated in Mirpur, Dhaka.

Bangabandhu National Stadium hosted the opening ceremony of the 2011 Cricket World Cup co-hosted by Bangladesh, Sri Lanka and India on 17 February 2011. The stadium was exclusively modernised and renovated into a world class stadium to host the opening ceremony. Bashat Architects was the chief consultant to conduct the renovation works. The capacity of the stadium had been increased to 36,000, a large LED screen had been installed, a modern roof had also been attached over the press box. The entrances and VIP box have also been upgraded to host the grand gala inaugural ceremony. The press box, along with a refreshment stand and the VIP box have been revamped.

The renovation is going on in Bangabandhu National Stadium which is conducted by ARTEK-BASHAT JV as chief consultant. Work is underway to modernize the stadium with state of the art facilities suitable for international sporting events.

A revised color scheme will be introduced as well which is Red and White motif. If you enter the Bangabandhu National Stadium and keep an eye on the field, you will think it is a cultivated land. No grass, no athletics tracks around. Mounds of soil here and there. The environment is not conducive to play at all. There are plans to have sheds in the entire gallery of the stadium.

There were broken chairs here and there in the gallery, the athletic tracks around the football field were patched up. The drainage system of the field was also not improved, if it rained, the water would freeze. In the monsoon season the game was played on a muddy field. Broken chair down. The open sky above. Sometimes the body is burning in the sun, sometimes the whole body is soaking in the rain. Even then the spectators watched the football game. The spectators do not have to sit in the gallery of Bangabandhu National Stadium in such a situation. No matter the sun, storm or rain, everyone can sit in the gallery of Home of Football and watch the game without any hindrance. Renovation work is going on keeping the existing structure of the stadium intact. Key features of the renovation works are as follows:

Bangabandhu National Stadium has been renovated many times since its construction. However, every time the reform has been done in front of one or another international or domestic tournament. The stadium was renovated in 2011 at a cost of around Tk 32 crore for the ICC Cricket World Cup. But this time, The National Sports Council is not renovating the stadium on the occasion of any specific tournament. Structural retrofitting is a major challenge since the stadium is quite old to retrofit into modern football stadium and to install the Membrane Gallery Shed all over the stadium. High quality new chairs will be installed in general gallery and VIP gallery. Folding chairs will be placed in the VIP gallery. The floodlights in the stadium will be replaced. However, the floodlight tower will remain unchanged. Only the lamp will be replaced. After the completion of the renovation Football and athletics will return here once again.