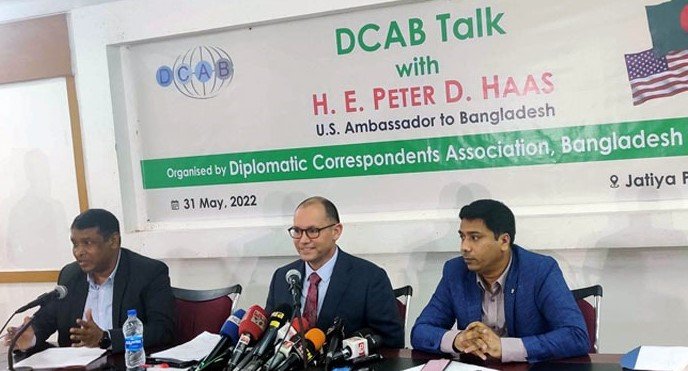 US ambassador to Bangladesh Peter Haas said there is no chance of lifting the US ban on the Rapid Action Battalion (RAB) without securing human rights law in addition to ensuring accountability. The American envoy was responding to a question from the journalists today (on May 31) at the National Press Club’s ‘DCAB Talk’ programme.

The Ambassador said there can be no excuse when it comes to democracy and human rights.thi/ Haas said that it was important to address the allegations against RAB and hold the force accountable. There is no chance of lifting the ban without accountability. RAB must abide by the human rights law. The US ambassador also mentioned that the US wants to see RAB as an effective force in combating terrorism. He also highlighted that a free and fair election is required where role of the Election Commission and a free press is crucial.

YOU CAN ALOS READ: RAB SANCTION, ROHINGYA ISSUES TO TOP AGENDA DURING US ASSISTANT SECRETARY’S VISIT

What did Erdogan assure Zelensky?