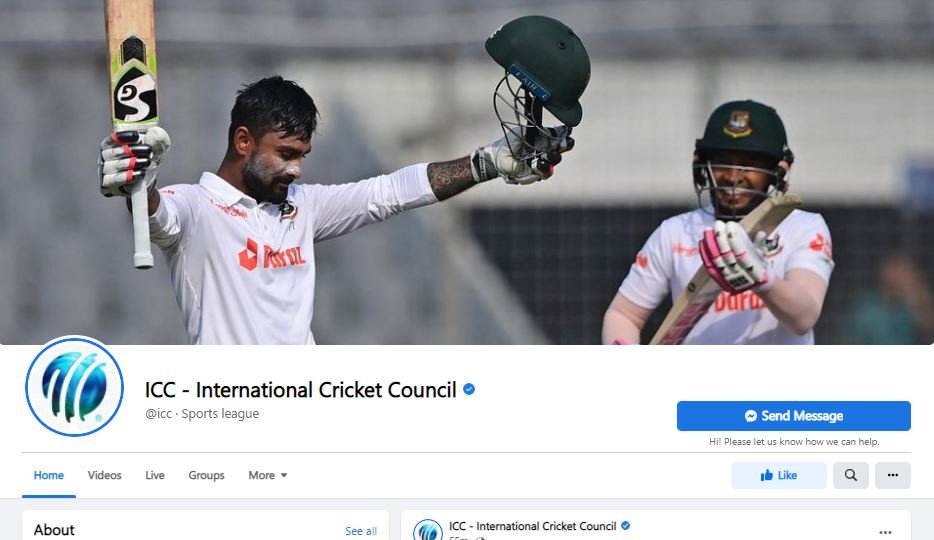 Liton Das and Mushfiqur Rahim led Bangladesh with a rock-solid partnership in the Dhaka Test. Standing in the face of pressure and fall, the two gifted Bangladesh batsmen had a wonderful partnership together as they both hit ton. For this achievement and great performance under pressure, the International Cricket Council (ICC) change their Facebook cover photo with these two batsmen.

The two batsmen broke the record of 15 years ago on the way to build their own innings. Mushfiqur and Liton gave the highest run-scoring pair for Bangladesh for the sixth wicket at a new record average. Of course, Mushfiqur’s name was also in the previous record. Mushfiqur made a partnership of 191 runs with Mohammad Ashraful against Sri Lanka in 2006. So far, this was the highest partnership of Bangladesh in the sixth wicket. This time again; against Sri Lanka, Liton-Mushfiqur broke the previous record of 15 years and set a new record.

Not only had that, for the first time in the sixth wicket, Liton-Mushfiqur given a pair of 200 runs to Bangladesh. Besides, after losing 5 wickets in 25 runs, there was no pair of centuries before in the history of Test cricket.

Earlier, the first session of Bangladesh did not go well at all. Bangladesh lost five batsmen to score 24 runs in the scoreboard. In such a difficult moment, Mushfiqur and Liton became the shield of the team. The two showed the way to Bangladesh with an unbroken partnership. Bangladesh will be fighting in the second day today relying on this pair.