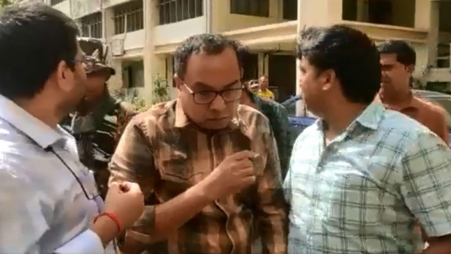 Soon after Prashant Kumar Halder’s (better known as P.K. Halder) recent arrest in India over money laundering charges, many curious questions are appearing in many minds. But at least one area of common curiosity in public domain perhaps is: will the man graduated from both the BUET and the IBA of Dhaka University be brought back to Bangladesh in a bid to put him on trial for the greater good of lawfulness?

It is, in fact, unclear as of now as to when P.K. Halder, will be returned to Bangladesh. According to Indian law, if there is a separate case for staying in the country illegally by unlawfully forging passports, voter cards and Aadhaar cards – it may take up to a year for P.K. Halder to return to Bangladesh, say experts.

Central Finance Ministry of India’s Enforcement Directorate (ED) on May 14 arrested PK Halder, the ringleader of a multi-billion money laundering and financial scandal case from banks and financial institutions in Bangladesh. Upon investigation, the ED came to know that the money was brought to India through hundi.

According to the Indo-Bangladesh Prisoner Repatriation Agreement of 2013, the concerned quarters think that P K Halder can be returned to Bangladesh. However, he came to India as a citizen by committing crimes like forgery, illegal voter card, Aadhaar card and even making passport.

All this is a serious crime under Indian law. If the ED files a case against him in this regard and his trial starts on Indian soil, then it will be possible to bring PK Halder back to Bangladesh after the expiry of the sentence. But it will be time consuming. Concerned individuals and lawyers mentioned that these crimes can lead to imprisonment for at least one year.

In 2019, Halder fled to India after embezzling several thousand crores of taka from Bangladesh and remained as a citizen of its neighbouring country India by making illegal identity cards. He had invested the fraudulent money in various land and house businesses. Collaborators like Sukumar Mridha, Pranab Halder were also a part of Prashant Halder’s illegal activities. The locals were sceptical when they saw luxurious houses, landed property and a fleet of cars in Ashok Nagar.

PK Halder, who was hiding in North 24 Parganas, opened a fish and sheep business. Behind this, his illegal business was going on.

According to the sources, Bangladeshi detectives learned that PK Halder had gone to the United States, United Kingdom and Canada to escape and then he come to India. The Anti-Corruption Commission (ACC) and Bangladesh Bank then requested the ED to arrest him.

The ED of India then launched a search operation in various parts of West Bengal in search of PK Halder’s close associates. Simultaneous raids were carried out in at least nine places in West Bengal. They found a large property including a few PK Halder’s aristocratic houses. Many important documents including land deeds were recovered from the houses. According to the ED notification, PK Halder was in hiding in Kolkata after changing his name. Initially it was reported that he has 20 to 22 houses in West Bengal.

What does Foreign Minister say?

Foreign Minister AK Abdul Momen said, “We’re still not officially as well as clearly aware about the arrest of PK Halder in India. But as soon as it is known officially, necessary steps will be taken to bring him back.”

He was responding to a question from reporters after speaking as the chief guest at the commemoration of National Professor Anisuzzaman and publication of a book of photographs at the Foreign Service Academy in the capital on May 14.

Replying to a question, the foreign minister said, “Action must be taken against the money launderers. The ACC is working on it. Many are smuggling money from the country anonymously. They are the enemies of the country. It is necessary to catch them. It would be better to have one or two examples like PK Halder.”