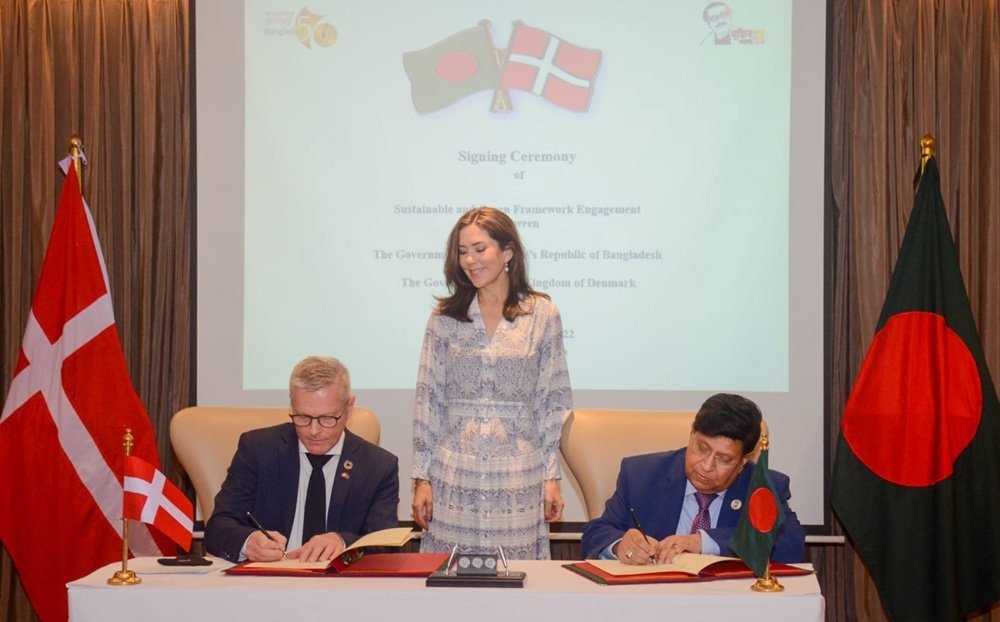 A Memorandum of Understanding (MoU) on ‘Sustainable and Green Framework Engagement’ was signed between Bangladesh and Denmark today (on April 25) in order to strengthen the partnership on climate and green transition between the two countries.

After the signing ceremony, a meeting was held between the two foreign ministers at the same venue where they discussed the issues of mutual interest. Celebrating the 50 years of diplomatic ties, the ministers have pledged to take the Bangladesh-Denmark relations to a new level.

The two countries also wished to partner towards attaining a sustainable and greener future globally. The focus will be on climate change adaptation and mitigation, environmental damage and loss of biodiversity, in the framework of the 2030 Agenda for Sustainable Development and the Paris Agreement on climate change, according to Danish Embassy in Dhaka.

Bangladesh and Denmark share a joint commitment in tackling global challenges such as climate change and achieving the Sustainable Development Goals.

Denmark is the first country ever to enter into a Framework Engagement with Bangladesh aiming to provide knowledge and technology towards attaining a sustainable and greener future. The cooperation will bring all instruments into play, ranging from diplomatic action and development cooperation to climate funding and investments, trade and private sector relations, including public-private partnerships, according to a joint media statement.What Foreign Minister said?

At the signing ceremony, Foreign Minister Momen said the Framework Engagement would serve as an expression of intent between Bangladesh and Denmark, which will be supplemented by an Action Plan involving the concerned government entities.

The Danish minister said he was very pleased to sign the agreement during his first visit to Bangladesh. “Denmark and Bangladesh are two countries with a strong and active engagement in the global climate agenda. Signing of the green framework document today, signals that we are ready to ‘walk the talk’ on the commitments made in the Paris Agreement – the international treaty on climate change,” he said.

Earlier, Crown princess Mary Elizabeth who arrived in Dhaka on April 25, 2022 on a three-day visit was received by Momen at Hazrat Shahjalal International Airport.

Shortly after arrival, the Princess held a meeting with Prime Minister Sheikh Hasina at the latter’s official residence Ganabhaban in the capital.

The Princess is scheduled to visit Rohingya camps in Cox’s Bazar and different areas in Sundarbans to interact with vulnerable community.