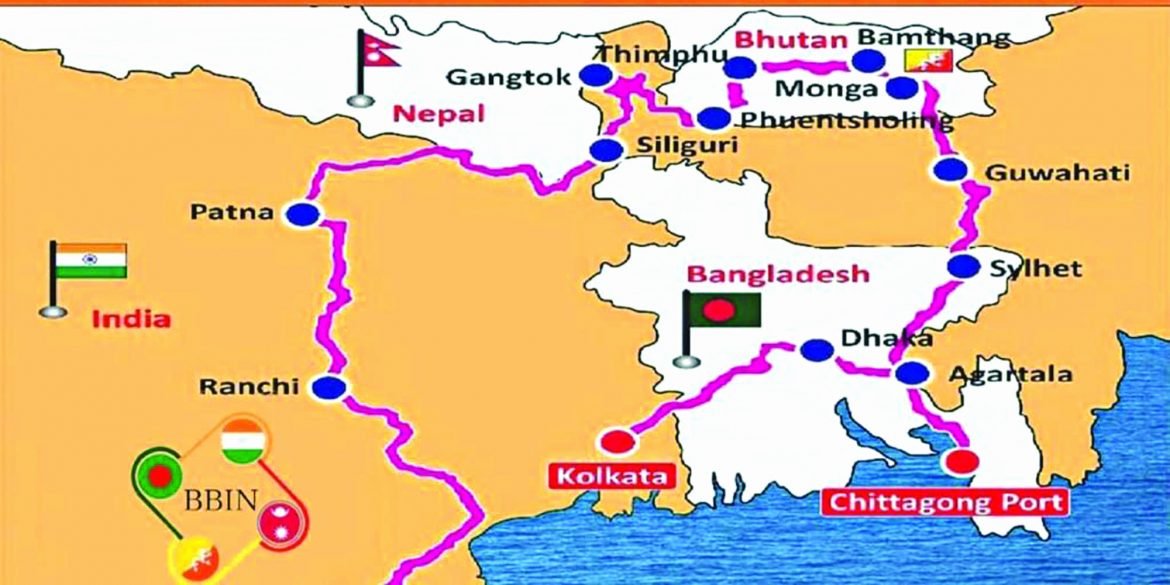 As the Indian army band playing a patriotic tune passed the saluting dais during the just-concluded state function in Dhaka celebrating the 50th anniversary of Bangladesh’s independence, a glimmer of satisfaction appeared on the faces of both Bangladesh President Abdul Hamid and the visiting guest at the function Indian President Ramnath Kovind. They must have silently cherished the memories of the partnership of the two nations in the five decades gone past, which South Asian pundits consider to be a model of a symbiotic relationship, exfoliating constructive cooperation of the highest order resulting in sustainable development and peace in the region.

India, a country of sub-continental dimensions with civilizational heritage, has long been accused of attempting to establish regional hegemony coercing its smaller neighbours in South Asia into submission – both politically and economically. Bangladesh is a notable exception in this regard. A comparatively young nation, the birth of Bangladesh as an independent country in 1971 with language as its primary identity is unique indeed in the annals of the history of the emergence of nation states. The glorious role played by India in this freedom struggle is a matter of pride for both the countries and this memory has played an exceedingly important role in cementing the bond of friendship and cooperation between the two nations in the five decades gone past.

Bangladesh is a riverine country with a temperate climate and soft alluvial soil where majority of its population has been traditionally engaged in agriculture. However, the country over the years has been able to diversify its sources of national income, which has witnessed considerable rise together with its stock of foreign exchange reserves. This is on account of increase in the production of foodstuff, rise in income from exports and that of remittances, which non-resident Bangladeshis earn while working abroad. Over the years, Bangladesh has made considerable progress in developing its communication infrastructure, manufacturing capacity and its service sector. It has also posted remarkable advancement it almost all the parameters included in the Global Sustainable Competitive Index (GSCI) and Human Development Index (HDI) performing comparatively better than most of its South Asian neighbours.

Recalling these growth indices is important as it points to the fact that Bangladesh has been witnessing onward steady development and today it may rightly be termed as a peaceful, progressive and inclusive democracy. The Asian Development Bank (ADB) has ranked Bangladesh as the fastest growing economy in the Asia Pacific region, eclipsing China, Vietnam and India and is the second largest economy in South Asia. It was also a pivotal moment when the country was able to fulfil the criterion for graduating from ‘a least developing country’ to a ‘developing economy’ status. This in spite of the recession facing the world economy at large, Bangladesh has been able to achieve an average of 6% growth per annum. It is today nearly self-sufficient in food production for its 166 million plus population. Its per capita income has risen nearly threefold reaching USD 2591 this year. In brief although escaping world attention it has become one of the world’s economic success stories.

Highlighting these achievements which Bangladesh has garnered in a relatively short span of time is important as it was considered a basket case when majority of its population suffered from hunger, deprivation and poverty and the economy was largely dependent on external aid even in the 1990s. In contrast Bangladesh today can boast of a healthy corpus of Foreign Exchange Reserves to the tune of USD 44 billion in February 2022.

But how does this success story of Bangladesh relate to its relationship with India, its immediate neighbour and largest trading partner? Strategic experts specializing in foreign policy and economic matters opine that this economic boost reflected in structural reforms and strong macroeconomic fundamentals coupled with high scores in Human Development Index has given Bangladesh a much desired image makeover enabling it to engage with regional and world powers from a position of strength.

Negating Henry Kissinger’s obnoxious comment Bangladesh today can be an equitable partner with any major world economy and India is no exception. With India however Bangladesh has a special relationship which encompasses political, socio-economic and cultural areas entwined together with a historical legacy which binds the peoples of the two friendly nations together. Bangladesh remembers with gratitude the role played by Mrs Indira Gandhi in its liberation war and how the Indian masses with open arms welcomed millions of refugees in their soil in 1971.

Indian Foreign Secretary Harsh Vardhan Shringla who was earlier India’s High Commissioner in Dhaka has described the relationship between the two countries as ‘exceptionally close’ and ‘a role model in international affairs’. There has been continuous high-level visits between the two countries for mutual consultation between the foreign offices and all steps have been taken to widen and deepen the areas of cooperation in as many diverse areas as possible. Apart from official agenda regular interaction between civil society, cultural personalities and the security forces have helped to erase the rough patches in the relationship as and when they arise.  When compared with similar such relationships that exist between other nations for example between neighbouring China and Pakistan, one can reiterate with conviction that India-Bangladesh relationship today stands on a firm footing based on mutual respect, trust and equal opportunities which provide a win-win situation for both the countries.

Foreign Secretary Harsh Vardhan Shringla’s recent remarks are significant in this regard. While delivering a lecture at the Swarnim Vijay Varsh Conclave : 2021 Shringla said “India-Bangladesh relations today are deeper than any other strategic partnership, it is a role model for relations between two neighbouring countries, the spirit of friendship, understanding and mutual respect engendered during the liberation of Bangladesh continues to permeate different aspects of this relationship”. He further added that “Bangladesh is India’s biggest development partner and India’s largest trading partner in South Asia, contributing to economic prosperity and supply chain resilience in the region and beyond.”

Prime Minister Narendra Modi while speaking during his recent trip to Dhaka to celebrate Bangladesh’s Golden Jubilee of Independence from Pakistan and Birth Centenary of Bongobondhu said “both India and Bangladesh want to see the world progressing through their own development. Both the countries want to see stability, love and peace instead of instability, terror and unrest in the world.”

It may be recalled that 10 days before the liberation of Bangladesh from Pakistan India recognized Bangladesh on December 6, 1971. India was one of the first countries to establish diplomatic ties with Bangladesh. India and Bangladesh share a 4096 km long international border which is the fifth-longest land border in the world. Drug, cattle, fake currency and human trafficking pose security threats as guarding such a long border with many riverine points is not a mean task. Often border killings result in tensions between the two countries and enrage public sentiment. Border area management has thus become an area of high priority for both countries. Fencing the international border and confidence-building measures including regular dialogue at different levels between the paramilitary forces on guard helps to mitigate the tension and create an atmosphere of bonhomie.

Currently India-Bangladesh trade stands at USD 7.9 Billion as on 2020 fiscal year. Despite the challenges posed by the COVID-19 pandemic which is an “unprecedented once a century health crisis” business ties prospered and two way trade was robust. India also ensured that there was no shortage of daily use commodities in Bangladesh even during the pandemic. Bilateral and regional connectivity, energy security, cooperation in multilateral forums like BIMSTEC and United Nations, exchange and training in education and health sectors were strengthened. India is also playing a major role in providing manpower training and supply of hardware to make the coveted ‘Digital Bangladesh’ project a success.

India gifted 2 million doses of Covishield vaccine to Bangladesh to tackle the rising cases of Covid -19 affected patients in that country. Many trains were also sent to Bangladesh with liquid oxygen which was then in short supply.

In response Bangladesh has granted the remarkable trans-shipment facility to India to transport goods through Bangladesh to the northeastern states of India. Bangladesh has helped India tackle insurgency in its north-east by handing over insurgent leaders to India and shut their training camps operating in Bangladeshi soil. Although over the years Bangladesh’s dependence on China has increased, the Sheikh Hasina led Awami League government has shown adequate sensitivity towards India’s security concerns and shunned projects which pose security threat perception for India.

Although illegal immigration from Bangladesh to India, which Dhaka obviously denies and sharing of water of common rivers have been thorny issues which continue to remain irritants in the relationship, many new areas of cooperation have been earmarked for execution which includes –

Despite such close bond between the two neighbours it may however be noted that there remains a small but vocal group in Bangladesh who continue to harbour anti-India sentiments. These are the same elements backed by pro-Pakistan Jamait-e-Islami who had opposed the country’s independence from Pakistan. The virulent protest demonstrations during Prime Minister  Narendra Modi’s visit to Bangladesh last March by these fundamentalist elements had embarrassed both New Delhi and Dhaka and corrective measures have been taken to arrest the spread of these forces. Similarly Dhaka took immediate and strong action against trouble mongers who wanted to disturb communal harmony in Bangladesh during Durga Puja , the biggest religious festival of minority Sanatani Hindus last October.

Cultural cooperation to remind the new generation of our common heritage rooted in the philosophy of Tagore, Nazrul and Lalan have been taken up to effectively counter these divisive forces . ‘Mujib Borso’ and the 150th Birth Anniversary of Mahatma Gandhi have been solemnly observed on both sides of the border. The filming of Sheikh Mujibur Rahman’s biopic by noted Director Shyam Benegal is progressing satisfactorily. The road from Mujib Nagar to the international border fencing Nadia district of West Bengal have been renamed ‘Sadhinata Shorok’ to remind people of the sad events during the nine months of the liberation war.

India by posting an ace diplomat Vikram Doraiswamy in Dhaka has since the past two years has adopted a proactive policy towards Bangladesh by engaging with its eastern neighbour in all conceivable sectors to enable Sheikh Hasina build Bangabandhu’s Sonar Bangla and achieve the UN mandated Millennium Development Goals. Ambassador Doraiswamy’s words in a recent speech may be remembered to understand India’s viewpoint about its relationship with Bangladesh, “for us in India, a stable, peaceful, progressive and prosperous Bangladesh is in India’s fundamental national interest”.  The leadership of both countries are thus striving hard to do away with the suspicion, mistrust and insecurity that plagued the relationship in the past and work for a robust and dynamic bond of partnership based on age old ties of kinship, shared language and culture and values of democracy, pluralism and secularism.

Online Gambling: The Inception of Virtual Casino in Bangladesh

Tale of a Positive Precedence in Project Cost, Delivery Time