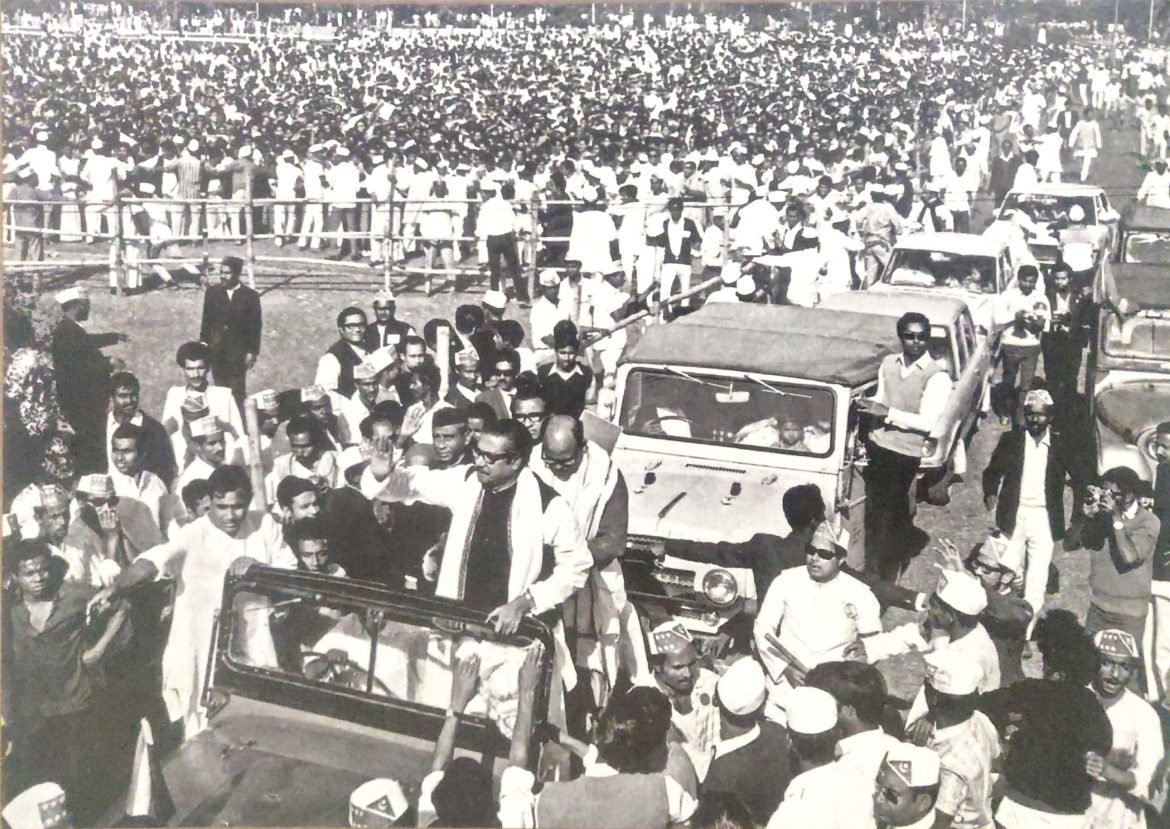 The 17th March this year marks the 102nd birth anniversary of Bangabandhu Sheikh Mujibur Rahman who is the undisputed leader of Bengalis, the great architect of independent-sovereign Bangladesh, the greatest Bengali of all time, and the father of the nation. On this day in 1920, a shining bright star named Sheikh Mujib was born in Tungipara of Gopalganj, which was the subdivision of the then Faridpur district, illuminating the house of his father Sheikh Lutfar Rahman and mother Saira Khatun. Sheikh Mujibur Rahman was the third of four sisters and two brothers.

During childhood days, he was named ‘Khoka’, who was later reborn as a beacon of liberation in the darkness of subjugation of the Bengali nation, became the greatest architect of the sovereign state of Bangladesh through his education-initiated human vision, great sense of life, honesty, courage, skill and foresight.

Sheikh Mujibur Rahman deeply witnessed the joys and sorrows, laughter and tears, emotions and feelings of the traditional rural society of Tungipara since childhood. The soil and people of the village attracted him strongly. From his childhood in the social life of that time, he was extremely disappointed to see the oppression, exploitation and oppression of the tenants, talukdars and moneylenders.

He was initiated into the social atmosphere of the harmony of Hindus and Muslims in the village with a non-communal consciousness. He participated actively in politics as a teenager. Sheikh Mujibur Rahman was arrested and imprisoned for the first time for joining the anti-British movement while studying in the eighth grade at the Mission School in Gopalganj.

One Man, Many Struggle

sFrom then on, the journey of Bangabandhu’s lifelong struggle began. He has always fought for the rights and welfare of the people of this country. For the liberation of the Bengali nation, he has been imprisoned in a blind cell of a Pakistani prison for 14 long years of his life, twice facing death on the gallows. But he never bowed down on the question of self-dignity and rights of the Bengali nation, and never gave up.

After 23 long years of struggle, Bangabandhu along with his colleagues formed Bangladesh Chhatra League in 1948 and later Bangladesh Awami League in 1949. From the language movement of 1952, United-front election of 1954, education movement of 1962, six-point movement of 1966, till the mass uprising of 1969, Bangabandhu Sheikh Mujibur Rahman tremendously contributed in all the movements and established himself as an undisputed leader of Bengali nation before the historic election of 1970.

Although the Bangabandhu-led Awami League won an absolute majority in the historic 1970 elections, the Pakistani ruling class did not hand over power. On 7th March 1971, Bangabandhu Sheikh Mujibur Rahman declared in a historic speech at the then Racecourse Ground: “This time the struggle is for our liberation – this time the struggle is for freedom.

“After this historic announcement of Bangabandhu on 7th March, an all-out movement started across the country. Bengalis got united and strict movement started under the leadership of Bangabandhu. As the movement progressed Bengali towards their independence, on the night of 25th March 1971, the Pakistani aggressors started the genocide by implementing their blueprint ‘Operation Searchlight’.

Inspired by Bangabandhu’s courageous, determined, uncompromising leadership and heroic struggle, the Bengali nation, which had been oppressed for hundreds of years, awoken. Encouraged by the indomitable desire for liberation, he united the Bengali nation in the final struggle for independence.

Bangabandhu Sheikh Mujibur Rahman officially declared the independence of Bangladesh in the early hours of 26th March 1971, before being arrested by the Pakistani aggressors. It’s a mere proof that independence was achieved through the undisputed leadership of Bangabandhu Sheikh Mujibur Rahman, the Commander of the Great War of Liberation. Through a nine-month bloody armed battle in which three million martyrs sacrificed their lives and 200,000 mothers and sisters lost their dignity. Under the leadership of Bangabandhu, an independent Bangladesh proudly emerged on the world map.

Bangabandhu and Bangladesh are one and integral part. The name of the slogan of freedom-loving people is Sheikh Mujib. His is the purest name flowing in the arteries of consciousness of the Bengali nation from generation to generation. He is the great hero of the epic poem ‘Swadhinata’ to the Bengali nation, the great pioneer of liberation from the shackles of subjugation, the adored man of Bangla and Bengalis for thousands of years. He is the greatest hero, the symbol of infinite bravery of Bengalis.

He is the proponent of Bengali nationalism and the creator of nationalism in the Bengali mind as people gathered on his call in the freedom fight because not only, they obeyed him as the leader, but also loved him. Because, through long struggle and boundless sacrifice, he has established a separate state for the Bengali nation.

On the night of 15th August 1975, Bangabandhu Sheikh Mujibur Rahman and his family were assassinated by the ruthless bullets of the traitors. Later, the murderous dictators of Bangabandhu, who illegally seized power, tried to spread the distorted history and values ​​of Pakistani ideology in independent Bangladesh. The killers were also engaged in various conspiracies nationally and internationally to erase Bangabandhu’s name from the pages of history. After the assassination of Bangabandhu, the military dictatorship in independent Bangladesh tried to teach false history to the next generation for three decades. The murderers killed Bangabandhu but could not erase Bangabandhu’s consciousness and ideology from people’s heart.

Bangabandhu’s indestructible consciousness and ideology has been sowed in the heart of every Bengali forever. There can’t be an end to the inseparable relationship between Bangabandhu and the Bengali nation. Bangabandhu has made an outstanding contribution to the establishment of world peace including equality, friendship and democracy. He was a symbol of freedom and peace, the messenger of liberation for the oppressed, downtrodden and subjugated people of the world. As long as there are Bengalis, as long as this world exists and as long as the history of the world exists, Bangabandhu will remain in every Bengalis heart and in every liberating, peace loving, humanist heart in the world. Bangabandhu’s life philosophy will inspire the Bengali nation forever.

Nobel laureate poet Rabindranath Tagore gave a written speech on his last birthday which is also the last speech of his life. There he quoted, “Today I am hoping that the Saviour’s birthday will come to us in this poverty-stricken cottage. I will wait and see. He will bring the prophecy of civilization. Hopefully, after the cataclysm, a clear revelation of history in the cloudless sky of monasticism may start from the sunrise horizon of this eastern region. And one day the undefeated man will overcome all obstacles in his quest for victory and on the way to regain his great dignity.

“In terms of ‘Kobiguru’ Rabindranath’s speech, it is strongly believed among Bengalis’ that Bangabandhu is that great leader mentioned by the poet, who conveyed the message of reassurance to the people. 102 years before, the horizon of sunrise was revealed as the liberator was born on this day in Tungipara, which is specifically a secluded village in the eastern part of Bengal. In fact, Bangabandhu not only liberated the Bengalis from endless oppression, but also gave them the priceless and long-cherished freedom. The Bengalis woke up thanks to his relentless efforts and got united following his bold speech. Under his clear directives, the Bengalis embarked on the unmatched battle and thereafter achieved the freedom. Because of this, the Bengali nation will forever remember this great man, who scripted the history of Bangladesh with charisma, precision, respect, gratitude and of course, love for the nation. Indeed, Bangabandhu was the greatest leader for Bangladesh with clear vision, endless struggle and success aplenty.